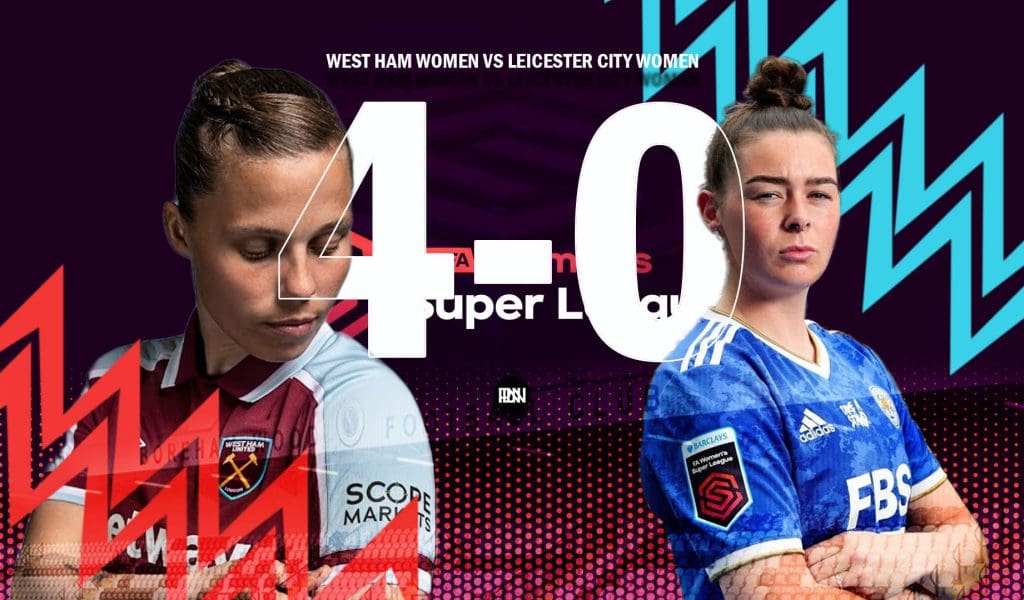 A match report which covers West Ham United’s 4-0 win over Leicester City in the WSL on Sunday.

Both teams lineup strongly with West Ham in a 3-5-2 today, it seems that they are looking to attack and not hold back. With Leicester playing in a typical 4-3-3, it’ll be interesting to see who’s the more attacking side today. And this may be the match to watch after the 6-1 thrashing of Man United by Chelsea, because there might be another one here.

Hawa Cissoko makes her first appearance for the Hammers since her red card against Brighton. Her return into the side allows Kate Longhurst to feature in midfield again. Gilly Flaherty will surely be happy having 3 defenders in defence once again and it could prove to be vital. Tameka Yallop also makes her first start for West Ham after signing from Brisbane Roar this summer.

Tameka Yallop (1-0 to West Ham United) with a debut goal gives hosts the lead. Due to a long ball from Kate Longhurst which she runs on to, Tameka Yallop breaks through Leicester’s offside trap and scores a poachers’ goal which puts the Irons 1-0 up. Some poor tracking for Leicester there, but even so Tameka was just too fast. 1-0.

Claudia Walker’s doubled the lead for Hammers off the mark too. Another long ball from the Hammers which was flicked on by Gilly Flaherty allowed Claudia to guide the ball into the net. It really is poor defending for Leicester City, which has cost them. And West Ham are now 2-0 up on the brink of halftime.

Ashleigh Plumptre (OG) nets in the wrong net. Oh, dear. Plumptre doesn’t deal with a dangerous West Ham cross in from the left and instead sends it into the back of her own net. Things get even better for the Hammers shortly before the interval when Leon’s cross is sliced into her own net by Ashleigh Plumptre to make it 3-0 to the Hammers.

At halftime, Hammers lead by three goals to nil. A rare, three substitutions for Leicester, as Hannah Cain, Abbie McManus, and Paige Bailey-Gayle making way for Mackenzie Smith, Jemma Purfield, and Sophie Howard to come off the bench. but that doesn’t help alot as Tameka Yallop wraps up the game. An extremely typical goal for this match, West Ham whip the ball in from just outside the box, and an unmarked player converts the ball into the back of the net. Some more examples of how not to defend by Leicester, as their backline stands there watching the ball go in. And it’s now 4-0 to West Ham.

A well-deserved 3 points for West Ham and an abysmal performance from Leicester, despite the stats seeming quite even. Also, a quick note to celebrate Brooke Cairns’ professional debut, after the 18-year-old was subbed on for Yui Hasegawa in the dying embers of the game. So with that done, it finishes 4-0 to West Ham United.