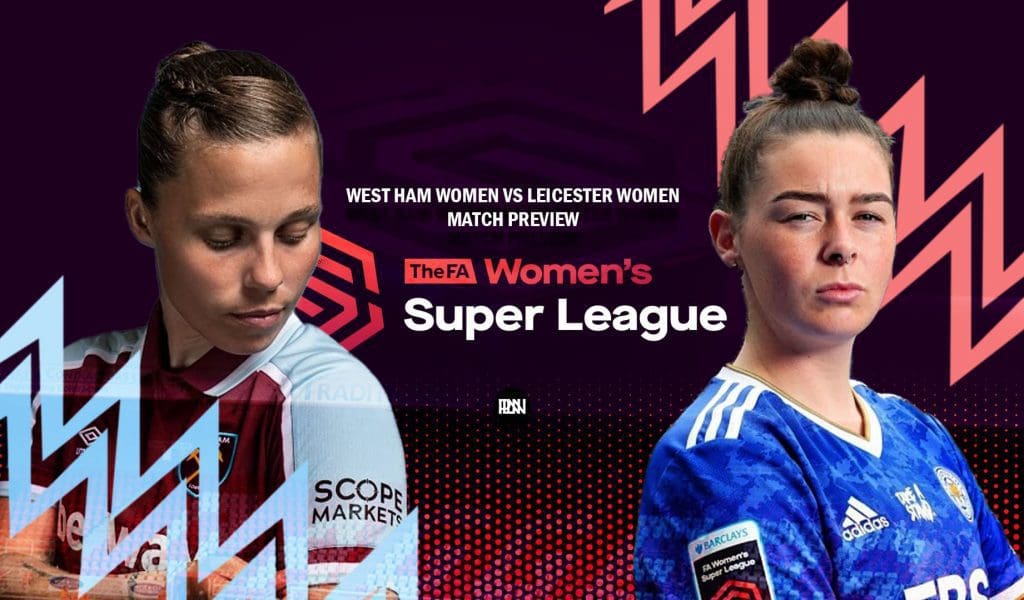 West Ham and Leicester have both had disappointing starts to the season, with West Ham dropping points due to the last gasp equaliser for Aston Villa, with Remi Allen saving them once again. The Hammers also lost to Brighton with 10 players on the field, after Hawa Cissoko was sent off in the first half. West Ham will be hoping that they can have a prolific goalscorer like Remi Allen, and in a tight match like this, they might need it.

After winning promotion to the WSL last season, Leicester City will be hoping to secure their position in the top division of women’s football this campaign. The Foxes will arrive having yet to register a point so far this season but came close to a draw against Aston Villa on the opening day. The team also lost 3-1 to Manchester United and will be looking at the fixture and targeting a win.

However, Leicester have been able to strengthen, bringing in experienced forward Jess Siggsworth – who joined from Manchester United during the summer. She will aid Natasha Flint, who scored 21 times across all competitions last season, including 17 in the Championship. The duo haven’t been able to leave their impact on the league just yet and will be hoping to on Sunday.

Both managers will be targeting all 3 points, in a match that could decide which teams drop down to the Championship. With both teams dropping points against relegation rivals Aston Villa, a loss here would send either team scrambling, especially when you realise that last season, 3 points was the difference between West Ham (9th) and the drop (12th).

Maisy Barker will be unavailable for selection tomorrow afternoon, with the 19-year-old defender sustaining a foot injury during the early stages of pre-season. 23-year-old defender Grace Fisk sustained a quad injury in their opening match against Brighton and Hove Albion and will be out of action for the clash against the Foxes. Hawa Cissoko is back available for selection after serving her suspension against Aston Villa last time out.

Let’s be honest. This is a massive game for both sides. West Ham and Leicester are both trying to stay up in the WSL, and a win for them would be massive. However, in women’s football, both teams are actually surprisingly small. So, before a big fixture for both clubs, let’s have a look back at their small beginnings.

West Ham are a FAWNL South team. From their beginnings in 2005, and even as recently as 2018, West Ham were a fourth-tier team, with their highest finish being 3rd, and they finished 3rd on three occasions and only being 3 points off promotion in 2010/11. So, how did they get into the WSL? Your answer is the restructuring plan. In the summer prior to the 18/19 season, it was announced that West Ham Ladies had successfully gained entry into the WSL, the top league in England through an application process. West Ham Ladies also changed their name to West Ham United women’s team as a result. Oh, and they’ve obviously had huge support from the men’s side. Whether that’s a good or bad thing is down to personal preference but former managing director Jack Sullivan clearly was helped by his dad, who owns the club, and likely spent more than the team actually received.

Leicester had a more organic rise to the top, but it was still aided by their men’s side. They were acquired by King Power in 2020, who also own the men’s side. The then Championship team spent a lot of money, including bringing in Remi Allen from WSL side Reading and Natasha Flint (who scored 70 goals in 66 matches for the Rovers). Due to this heavy spending, they were promoted from the Championship after winning the title.

Natasha Flint is one of Leicester City’s greatest weapons, the shiny and lethal one which usually sits at the front, ahead of all the rest. Most dangerous loitering around the edge of the box, Natasha is able to unleash killer strikes that leave keepers stunned. A talented attacker, West Ham will need to ensure that they can keep her under wraps which is easier said than done. A fantastic and prolific goalscorer, Natasha is exactly the sort of player that many WSL clubs are looking for, and Leicester should be very glad they have her.

A move away from the most successful clubs gets you a bit more space, and being given more trust on the football pitch. It’s not like when she was at Arsenal, where if she had a few average games, there was another world-class winger (Beth Mead) ready to step in. Instead, the club would have to persist and pray, and I think that’s why Lisa Evans has joined West Ham on loan from Arsenal.

Lisa Evans has been riddled with injuries recently and in the last few seasons when fit, she wasn’t at her best. But I think she’ll finally have a chance to show why she’s so good at West Ham this season. A footballer who specialises in key moments, Lisa is exactly the sort of person that West Ham wants to be at her best for this match.