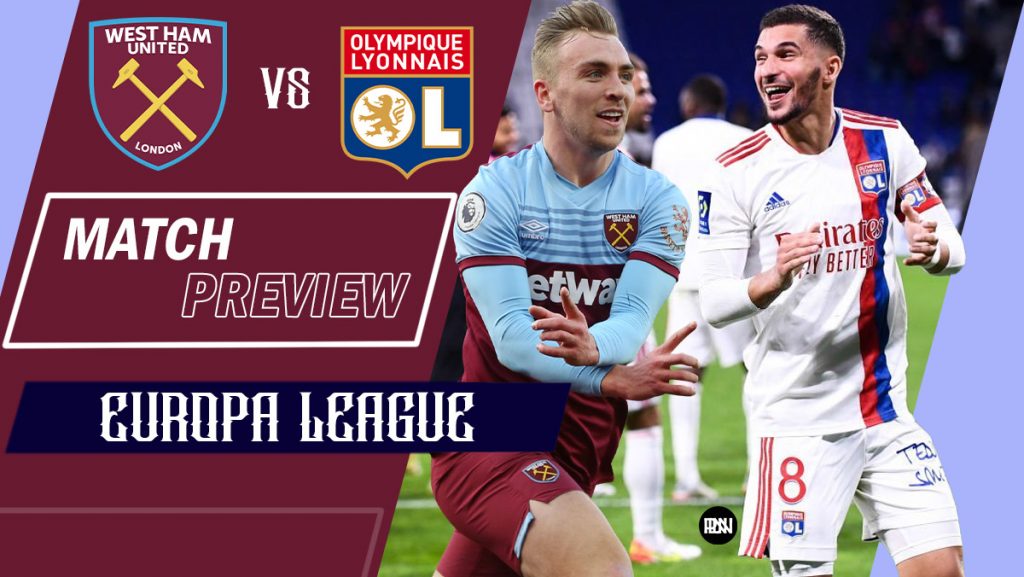 The London Stadium will play host to a historic night for West Ham as they welcome Lyon for the first leg of their Europa League quarter-final tie on Thursday evening.

David Moyes’s men defeated Sevilla 2-1 on aggregate to reach the last eight, while Les Gones – in spite of their domestic troubles – managed to get the better of FC Porto by the same scoreline over two legs.

Some footballing scripts are just meant to be written, but not even famous wordsmith William Shakespeare himself could have foretold the stunning drama which unfolded in the English capital when West Ham welcomed Sevilla for the second leg of their last-16 tie.

After going 1-0 down to the La Liga giants in Spain, Moyes’ men forced extra-time through Tomas Soucek’s header just before half-time, and Ukrainian forward Andriy Yarmelenko would place his name in West Ham folklore with the decisive goal after 112 minutes of action.

A potential eye-opening tie with Barcelona did not materialise for West Ham, but a meeting with the Catalans could await them in the semi-finals should they get there, and they enter Thursday’s game having just seen off Everton 2-1 in the Premier League.

What David Moyes has achieved with The Hammers in such a short space of time has been nothing short of sensational, despite having arguably the smallest side in the competition and having won each of their last four at the London Stadium in all competitions, Lyon – despite their stature – are certainly not travelling to London as favourites.

West Ham have also scored in each one of their home games since the turn of the year and have only shipped three goals in their last six matches on home turf, so the home crowd can be forgiven for dreaming big on the continental stage come Thursday night.

Given their mid-table standing in Ligue 1, the Europa League arguably represents Lyon’s best chance of returning to continental competition for the 2022-23 season, and Peter Bosz breathed a sigh of relief as his crop managed to get the job done against FC Porto.

Lucas Paqueta’s strike in the first leg handed Les Gones a slender advantage before locking horns with their Portuguese counterparts at the Groupama Stadium, where Moussa Dembele’s early strike made Porto’s task that little bit harder, and they could not complete a remarkable turnaround despite attacker Pepe’s consolation.

Bosz’s side sure could do with success on the continental stage while they languish in mid-table obscurity in Ligue 1, and they made hard work of their meeting with Angers at the weekend but prevailed 3-2 thanks to a winner from Shakhtar Donetsk loanee Tete.

Only once before have Lyon managed to make it past the quarter-finals of the Europa League in its current format – going down to Ajax in the semi-finals in 2016-17 – but they have impressively won each of their last six away from home in the competition since a 1-0 loss to Atalanta BC in December 2017.

West Ham and Lyon have never locked horns competitively before, but Les Gones have won just one of their previous six encounters against clubs from the English capital and can take nothing for granted as the bubbles blow in force around the London Stadium.

West Ham midfielder and England international Declan Rice has enjoyed another remarkable rise this season, becoming a pivotal and central figure for both club and country.

The 23-year-old has been capped 29 times by England and played in all seven matches at Euro 2020 as they agonizingly lost to Italy on penalties in the final.

Speaking earlier this week, Moyes believes Rice is worth at least £150m but insists “England’s best performer” will not be sold this summer.

While Rice has been reportedly been interesting the likes of Chelsea, Manchester United and Liverpool in recent weeks and months, it is easy to see why David Moyes has placed an astronomical £150m price tag on his head.

The Hammers academy graduate has proven a solid, destructive and dominant base in West Ham’s midfield and has been one of the many key reasons why West Ham are going through a stunning upward trajectory under David Moyes’ stewardship so far.

Rice has considerably proven an influential figure both in his defensive and attacking play, breaking up opposition’s attacks as well as progressing West Ham’s build-up. One of the intriguing individual battles that could arise on Thursday’s exciting and historic tie could be the Englishman up against Lyon’s Brazilian attacking midfield wizard Lucas Paqueta.

Given an impressive 7.38 rating by WhoScored for his scintillating performances for Lyon in the Europa League this season, the Brazilian maestro continues to prove himself as one of Europe’s most highly coveted creative outlets.

Two goals and two assists so far in the competition, Paqueta is head and shoulders above the rest, the decisive figure in Peter Bosz’ side and will be vital to any ambitions Lyon have of overcoming such a tough test in David Moyes’ men.

Blessed with incredible vision, wonderful technique, great passing acumen, a wand of a left boot, superb game-by-game application and a hard worker, Paqueta has also become a key figure within such a ridiculously talented Brazil squad, one of the first names on the teamsheet for the South American giants.

Along with his two goals and two assists in continental competition this season, he’s also registered seven goals and five assists in Ligue 1. He averages 1.4 key passes, and 1.7 dribbles per game in the Europa League which suggests that he is the man Lyon look to for attacking inspiration and creativity.

The Hammers will have to work double-time in attempting to deal with his incredible attributes both in the middle and attacking third. Any lofty hopes West Ham have of getting through to the next stage, they’ll have to starve the services that Paqueta offers in abundance.

West Ham playmaker Manuel Lanzini is suspended for the first leg after picking up his third booking of the tournament against Sevilla, but the Argentine did not take part against Everton after being involved in a worrying car accident a few days beforehand.

As well as long-term absentee Angelo Ogbonna, Moyes is also sweating over the fitness of right-back Ben Johnson, who missed the Everton win due to a minor hamstring problem and will need assessing later this week.

Europa League goalkeeper Alphonse Areola is set to demote Lukasz Fabianski down to the bench this week, while Vladimir Coufal and Ryan Fredericks will battle to start at right-back if Johnson is not passed fit.

As for the French outfit, Bosz remains without Lenny Pintor, Rayan Cherki and Sinaly Diomande for the long-term, and it may be too soon for midfield fan-favourite Maxence Caqueret to feature after a knee injury.

Cameroon hero Karl Toko Ekambi came down with a bout of illness before the win over Angers and is also doubtful for the first leg, so Tete will certainly hope to force his way into the XI after his game-winning contribution off the bench at the weekend.

Thiago Mendes and Tottenham Hotspur loanee Tanguy Ndombele ought to form the midfield pairing if Caqueret does not make the cut, as ex-Fulham man Moussa Dembele leads the line on his return to English turf.