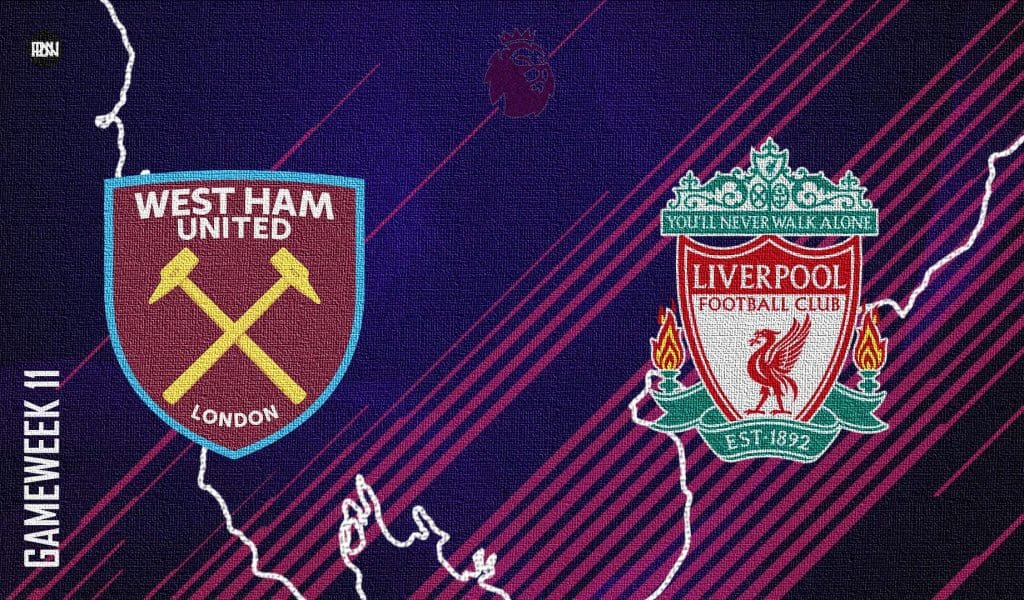 The 11th match week of the 2021/22 Premier League is here, and with the last international break of the calendar year just around the corner, teams and players will be looking to go out on a high. This week, title hopefuls Liverpool make the trip to the capital to face a resurgent West Ham United at the London Stadium on Sunday.

West Ham United come into this game on the back of a draw in the midweek against Belgian club Genk in the UEFA Europa League. There were plenty of positives to take from that 2-2 draw for David Moyes. Despite their advancement to the knockout stage being postponed for now, the Hammers will be happy with a point away from home. Moyes will especially be happy with Said Benrahma who almost single-handedly won the game for his team. However, a late own goal by Tomas Soucek denied them a victory in Belgium, and they will now turn their focus to Liverpool at home on Sunday.

Liverpool were brilliant in the midweek Champions League fixture against Atletico Madrid, as the Merseyside Reds became the fourth team alongside Bayern Munich, Juventus, and Ajax to qualify for the last 16 of the UCL. They scored two quick-fire goals inside the first 25 minutes and set the tone for the game. Things were made much easier for them after Atletico were brought down to ten men after defender Felipe Luis was sent off in the 36th minute. Liverpool dominated the rest of the game and had a goal ruled out for offside in the second half, as they cruised to a 2-0 win at home.

They will now turn their attention to Sunday’s game against West Ham and with hopes to extend their wonderful away record this season, which has seen them score 19 goals, conceding just 3 and lose none in 5 league games so far.

West Ham loanee Alex Kral recovered from COVID-19 to feature from the bench against Genk on Thursday night, making his European debut for the club in the process and will be in contention to be in the matchday squad again on Sunday.

In a rare sight, Kral’s return means that the Hammers have no players on the sideline, and currently have a fully fit squad, which should provide Moyes with many options. Czech right-back Vladimir Coufal recovered from a groin injury to start against Genk and even provided an assist for Benrahma’s first goal. He will be glad with a productive outing and will be vying with Ben Johnson for a spot in the starting lineup on Sunday.

Liverpool manager Jurgen Klopp had an injury boost ahead of the game against Atletico Madrid when Spanish midfielder Thiago returned to the squad after spending a lengthy time on the sidelines. The Spaniard was brought on for Fabinho- who himself is still returning to full fitness from his injury layoff- in the 60th minute and could be in contention for a spot on the bench, or even an unlikely start on Sunday. However, Naby Keita and James Milner were both absent from the squad in the midweek, and are expected to miss out on the journey to London as well.

Defender Joe Gomez is nursing a calf injury and is unlikely to feature in Sunday’s game.  Youngster Harvey Elliot continues to recover from his horrible ankle injury, and is expected to spend a long time away from the pitch. There are also doubts over Brazilian Roberto Firmino’s availability on Sunday, and Diogo Jota will be expected to start if the striker is declared unfit.

The man in hot form at the moment, Benrahma stock has risen up multifold since the season began, with the Algerian forward showing his class and talent in the Premier League. Life did not get off to a good start for him when he first moved across town from Brentford to West Ham, but after a rocky first season, the 26-year-old is really shining now.

With 15 appearances in all competitions so far, the former Brentford man has scored 6 goals and assisted 3 and has been an instrumental figure in the West Ham attack. He has formed a brilliant partnership with the likes of Bowen and Antonio, and the three in tandem, have troubled opposition defenders a lot this season. David Moyes has started relying a lot more on the Algerian, with the forward being named in the starting 11 in all league games this season.

His creativity and pace, has flourished in a West Ham team that breaks fast and with his ability to turn a defender inside out with his quick turn of pace, Benrahma is fast becoming one of the most dangerous players in the league. He can shoot well from outside the box and is gradually cementing his place as the chief creator in the West Ham team. With a brace against Genk in the midweek fixture, Benrahma showed why he is un-droppable at the moment, and he will be expected to trouble Liverpool’s strong defense on Sunday.

Mo Salah needs no introduction now, and is undoubtedly one of the best players in the league. He is a player that strikes fear into hearts of defenders, and is the one they focus on. He has scored in 8 league games out of 10 this season and has brought his tally up to 10 goals, leading the race for the Premier League Golden Boot. Although it is very early in the season, the signs are there that the Egyptian will go on to win his third top scorer award in the league.

The Egyptian had an impactful evening against Brighton and Hove Albion in the last league game, and although he failed to score in the 2-2 draw at Anfield, the winger provided a very simple assist for Henderson who scored the game’s first goal from the edge of the box. His constant runs left the Brighton defense confused and he would be disappointed to come away with just an assist from the game. Expect to see more of the same on Sunday, and he will be hoping for a much better outing then.

CAN WEST HAM CONTINUE THEIR FORM AGAINST LIVERPOOL?

It would be safe to say that David Moyes’ second stint at the club has exceeded expectations, with no one predicting the Hammers to be challenging for the top 4 places for two years in a row. When he returned to the club for a second time, West Ham were sitting 17th and in danger of relegation. Moyes managed the team to survival in the few remaining games, and his next season in charge saw a huge upturn in form, with the Irons achieving 6th place and a club-record total of 65 points in the 2020-21 season. Since that season, they have played some exceptional football, and have been dominating the Europa League this season as well.

West Ham United have been consistent this season. Despite key players suffering injuries on various occasions, it has not deterred the Scottish manager and his men, and the Hammers have marched on with confidence, and now they face arguably their sternest test of the season. Liverpool have destroyed anything and everything in their path, and will look to continue to do so on Sunday. After the midweek win against Atletico Madrid, fatigue could play a factor, but Jurgen Klopp will want to put out his best team and will be wary of taking West Ham lightly.

Liverpool will need to be on top form on Sunday, and especially after the dropped points at home against Brighton and Hove Albion last week, they will want all three points to get back to winning ways in the league. However, West Ham will prove to be very tricky opponents, with their ability to be solid defensively and not give into opposition pressure. They are very dangerous on the break, and with extremely pacey and devilishly tricky players like Jarrod Bowen, Said Benrahma and Michail Antonio, their attacking threat is one to be taken very seriously.

A result against Liverpool would do West Ham a world of good, while it would harm the Merseyside Reds and their title challenge. With the build-up surrounding the fixture, it all makes up for a thrilling and enticing game and would definitely be one to watch.