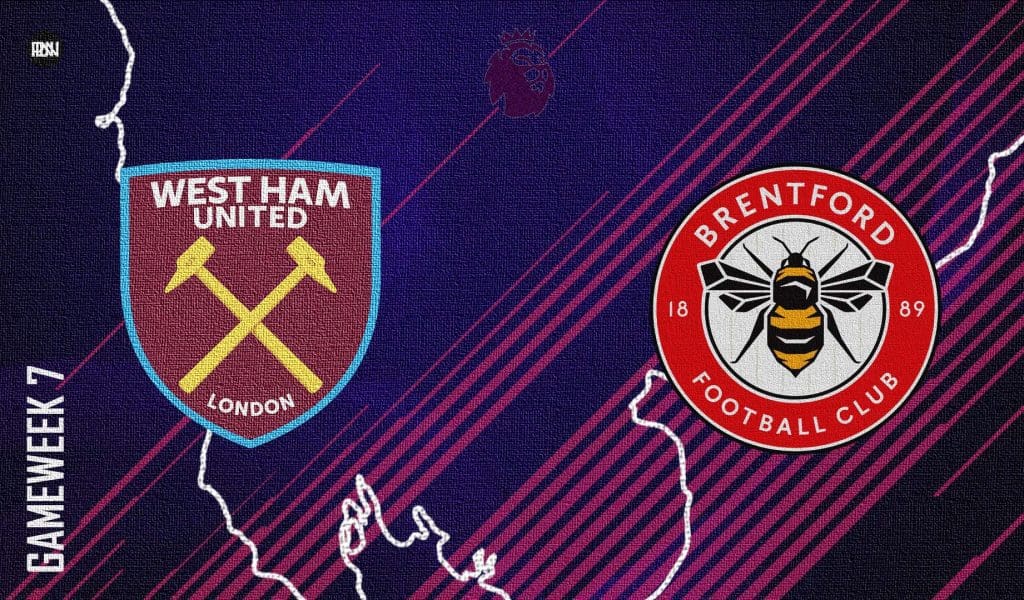 West Ham United hosts newcomers Brentford at the London Stadium on Sunday as the Irons look to penetrate the top four before heading into the international break. Both clubs head into the encounter on the back of impressive performances, with the hosts having won their second UEFA Europa League game mid-week and the visitors holding Liverpool to a draw last weekend.

Brentford proved their mettle against Liverpool as the Bees salvaged an impressive 3-3 draw against the Reds on home soil last weekend. A victory on Sunday would potentially launch in the top half of the table as they look to capitalize on their momentum following their remarkable outing in game week six. Meanwhile, the hosts heading into the encounter following a three-game winning streak across all competitions. West Ham have been amongst the most impressive sides since the beginning of the campaign, and three points on Sunday could take their tally to 29 points at home since the turn of the year – a record only inferior to Tottenham Hotspur and Manchester City.

Owing to a crucial juncture before the international break, both managers will be keen on taking three points on Sunday. Brentford will be hoping to maintain their impressive form, while the hosts will be desperate to add to their tally of victories, facing a formidable Bees’ defence at the London Stadium.

David Moyes will likely be without the services of Vladimir Coufal after the right-back suffered a groin problem before the mid-week Europa League tie while his replacement, Ryan Fredericks, too, will remain out of contention with a similar injury. Ben Johnson will likely be called upon to face Brentford at right-back following a decent outing in Europe.

Kourt Zouma, Pablo Fornals, and Tomas Soucek, among other first-team players, will likely return to the squad after a majority of the first team were rested in the mid-week Europa League tie against Rapid Vienna. The club’s highest goal scorer, Michail Antonio, will be keen on adding to his goal tally come Sunday.

The Bees will be without the presence of Ethan Pinnock at centre-back on Sunday, with Mathias ‘Zanka’ Jorgenson likely to replace him in the position. Mads Sorensen and Josh Dasilva remain out of contention, while Yoane Wissa may find himself in contention for a start following his impactful performance last weekend.

Thomas Frank is likely to field an unchanged line-up on Sunday following their impressive outing against Liverpool. Ivan Toney and Bryan Mbuemo are likely to be the focal point in the attack, with an organised team holding the shape behind the two attackers.

Three points remain crucial for both managers on Sunday as they look to maintain their impressive form heading into the international break. While West Ham have been amongst the most attacking sides in the league, the hosts are likely to be exploited on the right flank due to absentees in the right-back position. Meanwhile, Brentford will be hoping to maintain their defensive solidity and capitalize on their chances in the final third by attaching their strikers and finding space behind West Ham’s centre-backs upfront.

Both teams will be hoping to remain compact in the middle of the pitch and attack down the flanks at the weekend. The hosts will be heavily reliant on their creative players in the attacking third while the visitors will be keen on triggering counter-attacks and being progressive in possession on Sunday. While a draw may not dampen their starts to the season, both managers will be reluctant to settle for a point and remain keen on securing three points ahead of the international break.

In contention to challenge for the golden boot following an astounding start to the campaign, Antonio will be hoping to add to his goal contributions on Sunday. The striker will be key to Moyes’ approach at the weekend, with the team likely to rely on his clinical finishing and ability to attract defenders in the final third at the weekend.

Facing a physically imposing Brentford backline, Antonio’s physicality and ability to hold the ball will be vital to West Ham’s goal-scoring opportunities in and around the box. Given his ability to take on defenders and movement within the box, the striker will be pivotal on set-pieces and in the team’s creative build-up at the London Stadium on Sunday.

Following a noteworthy performance against Liverpool, much like Antonio, Ivan Toney will be pivotal to Brentford’s attacking prowess against West Ham on Sunday. The striker has been impressive since the start of the season and will be hoping to capitalize on West Ham’s defensive weaknesses at the weekend.

Toney’s movement and drive with the ball will be vital to Brentford’s attacking prospects against West Ham. The striker’s link-up play and work rate could potentially prove to be a difference between the two sides at the weekend as the visitors look to cause an upset at the weekend.