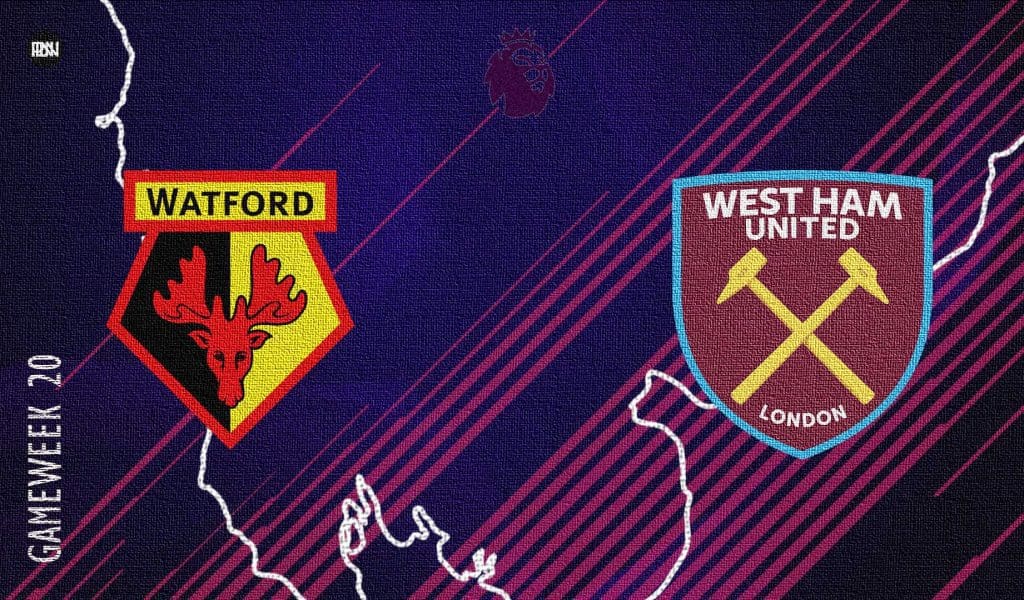 Watford will lock horns with West Ham in their Premier League outing at Vicarage Road on Tuesday. The hosts who have spent nearly three weeks on the sidelines owing to a lack of available players and will be fresh and raring to resume their campaign will be up against a West Ham outfit who have been guilty of faltering in recent weeks after a strong start to their season.

West Ham had an excellent start to their season and looked like genuine top-four contenders after securing a few big scalps – but recent results have meant that they have fallen off by quite a bit. The Hammers have only taken five points from their last seven games and suffered more misery in their last outing when they lost 3-2 to Southampton in their last outing. As a result, they have now fallen out of the top five places and trail fourth-placed Arsenal by seven points.

While the visitors currently sit sixth with 28 points to their name, their hosts for the mid-week fixture are currently placed 17th in the league with only 13 points. Having had three festive fixtures cancelled because of a coronavirus crisis, Watford are without even a single point since November – and have been out of action since December 10. The Hornets were on a run of four consecutive defeats before their hiatus and currently sit only two points above relegation spots.

Claudio Ranieri’s side finds themselves only one place off the automatic relegation spots after losing 11 out of their total 16 games. The Hornets will hope that the hiatus has helped them sort their troubles out on the training ground before they return to action against a struggling West Ham side. The head-to-head record between the two teams favours West Ham who have won seven out of the total 14 meetings – while Watford have won six, two have ended in a draw.

Michael Antonio returned to the fold against Southampton after recovering from a positive test of coronavirus, and made his impact felt immediately with a goal right after coming on. The Jamaican is likely to start upfront for the Hammers after breaking his goal drought lasting eight consecutive games, sending Jarrod Bowen back to shift back out wide. Manuel Lanzini came on for Pablo Fornals in the loss to Southampton, in a change that can also be retained by David Moyes. While Aaron Creswell remains out, Craig Dawson who joined from Watford last summer is likely to start in the absence of Kurt Zouma and Angelo Ogbonna.

As for the hosts, Watford have had the opportunity to recover several first-team players who were unavailable due to the COVID-19 outbreak in their camp, courtesy of the enforced break. Adam Masina and Ken Sema are expected to be fully fit and involved in the squad, but Nicolas Nkoulou, Francisco Sierralta, Peter Etebo and goalkeeper Ben Foster are still sidelined, alongside the club’s Player of the Year, Ismaila Sarr, who had scored just one goal under Ranieri before suffering a knee injury that could keep him out for several weeks. One of the few success stories for the home side this season so far has been their Nigerian striker Emmanuel Dennis, who will start up front shortly before his departure for the Africa Nations Cup early next month.

Passive defending in recent weeks has been a major concern for West Ham, who did come back from behind twice to equalise against Southampton – but eventually ended up surrendering the game to continue their recent woes. The Hammers have been winless in their last five games in all competitions, conceding eight goals in the process while scoring only three. Although it is true that West Ham’s dip in form has coincided with the unavailability of defensive mainstays through injuries, their defending simply has not been at the level that it was early in the season.

Watford have had their fair share of defensive problems this season as well. The Hornets were on an unenviable run of four successive defeats before their enforced break, conceding 11 times in the period – in fact, Watford have lost eight of their last 10

Premier League games while winning only two. Only Newcastle United, Norwich City, Leeds United and Leicester City have conceded more goals this season than the Hornets – who will be hoping that there is a sharp upturn in their defending to help them beat the drop this season. While Watford will have to keep things tight at the back, they will depend on Emmanuel Dennis to bail them out with his exploits up front.

Although West Ham had their confidence hammered again on Boxing Day, their hosts have not kept a clean sheet all season and are not about to start now, given some inevitable rustiness after a fortnight in cold storage. Injuries have limited the Irons’ effectiveness in recent weeks, but they should still have enough threat to edge a team which has such a soft underbelly – particularly if Antonio is closer to full fitness and back in form inside the box. David Moyes will be hoping for a return to winning ways for his Hammers, to end a truly extraordinary year on a good note.

If the underdogs Watford are to get anything from the game, it is their talisman who has to step up to the occasion. Emmanuel Dennis has been one of the brighter spots of a dark season for the Hornets so far, as it has been his exploits that have inspired Watford to the few positive results that they have had this season. The Nigerian forward has racked up seven goals and five assists in 15 Premier League appearances this season, and has been one of the prolific forwards in the league despite playing for a team that is likely to find itself in a relegation scrap next year. The Hornets have heavily depended on their talisman to come up with their attacking output, and will hope for a few more goals before he leaves to represent Nigeria in the African Cup of Nations.

As for the visitors, their main man for this outing is none other than the man upfront. Michael Antonio is the club’s all-time top goalscorer in the Premier League era, and he has also had the most goal involvements for the Hammers this season with seven goals and four assists. It comes as no surprise that the Hammers’ streak of bad form coincided with Antonio’s barren patch in front of goal when he could not net in eight appearances – but his goal off the bench against Southampton is certain to encourage the West Ham faithful. Sent off the bench at half time to make an impact, Antonio did just that as he found the goal within four minutes. Their main man may be back in form, and that might mean a return in form for the rest of the team as well.