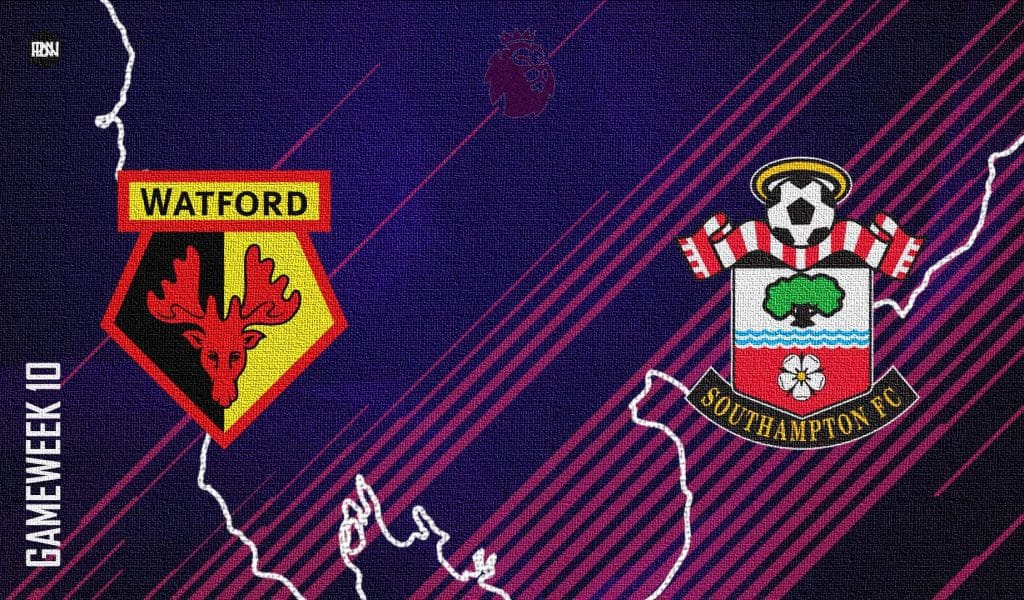 Watford will look to make it two straight wins in as many games, when they face Southampton in their Premier League meeting on Saturday. The Hornets who sit 14th on the table recorded a 5-2 win over Everton at Goodison Park in their last league outing, marking a great turnaround to life under their new manager Claudio Ranieri after a 5-0 loss to Liverpool in his first match in charge. The Hertfordshire outfit have collected a total of 10 points from their nine games so far.

Their opponents Southampton sit 16th on the table, having collected eight points from their nine games this season. The Saints played out a 2-2 draw against Burnley in their last league outing, and will go into this weekend’s fixture off the back of a loss against Chelsea in the fourth round of the Carabao Cup on Wednesday. Ralph Hassenhüttl’s side gave a good account of themselves against the league leaders, but were edged out on penalties after a 0-0 draw in regulation time.

Watford have not won at Vicarage Road since the opening weekend of the season, though, collecting just one point from their last three home league fixtures against Wolves, Newcastle and Liverpool. Going into the weekend’s fixture, history favours the visitors as the Hornets have won just one of their last 13 league meetings with Southampton, meanwhile, and lost both games against the Saints when they locked horns during the 2019-20 Premier League campaign.

Watford boss Claudio Ranieri confirmed that Danny Rose is available again after recovering from a calf problem, but while Kiko Femenia remains a doubt – Francisco Sierralta, Christian Kabasele and Peter Etebo will all miss out through injury. Last weekend’s goalscorer and forward Emmanuel Dennis will also miss the game through a suspension. It is likely that Ranieri sticks with the winning combination that clicked so well last weekend.

As for Southampton, Armando Broja has been ruled out of the contest with an ankle injury that he suffered in last weekend’s draw with Burnley, meaning that Che Adams is likely to start up front. Jack Stephens is also still out with a knee problem, while Mohamed Elyounoussi remains a doubt with a wrist injury, but James Ward-Prowse is available again after a suspension.

Watford have struggled at the back all throughout the season so far, as they boast the third-worst defensive record in the league. Only Norwich and Newcastle have conceded more goals than Watford (17), and the Saints will look to make the most out of their opponents’ defensive frailties on Saturday. But in order to do that, Southampton will need to be clinical with their chances – something that they have not managed to do yet this season, as they boast the joint third-worst attacking record this season. Only Norwich and Burnley have scored lesser goals than the Saints (8) this season, and the absence of Armando Broja is only going to make things worse for them. Adam Armstrong has not been amongst the goals since the opening weekend, and will likely be replaced in the Saints line-up by Nathan Redmond – who will look to run behind the Watford line of defense and try to create openings for his strike partner Che Adams to profit from.

The Norwegian forward will be key for Watford this weekend just as he was last weekend. King scored a brilliant hat-trick to help Watford turn around a 2-1 deficit away from home, and will hope to return to the scoresheet when he leads the line against Southampton on Saturday. After an unsuccessful spell at Everton last year, King proved a point at Goodison Park last weekend – and will be looking to keep up his hot streak of form at Vicarage Road.

Southampton’s talisman will return to the team after serving his three-match suspension courtesy of his straight red card against Chelsea in a 1-3 loss at Stamford Bridge. The English midfielder has scored twice this season in the Premier League – both coming from the spot, and it is his creative influence that will be key for the Saints to try and get anything out of the outing. Ward-Prowse has made 10 key passes and created 10 chances this season already, and will look to inspire his team to a win in the absence of their frontmen.