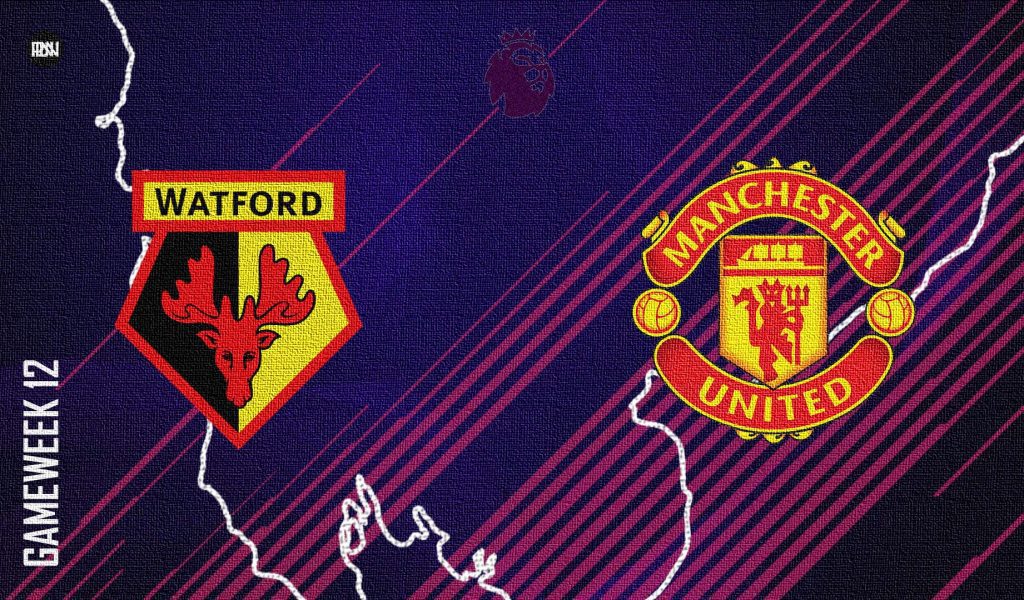 The final international break of 2021 is finally over, and even after some intriguing games and shock results on the international stage, fans will be more than happy to welcome back club football this weekend. Premier League returns for the 12th gameweek of 38, and all teams will be raring to fight it out for three points again. This weekend, Watford welcome Manchester United to Vicarage Road, with both teams desperate for a win.

Watford had a good start to life back in the top-flight of English football, with a shock 3-2 win over Aston Villa on an opening day. However, three losses on the bounce and just two wins from seven games saw the Hornets go back to their old ways, as they sacked head coach Xisco Munoz after less than 10 months in charge, and replaced the Spaniard with Claudio Ranieri, who has led the team in the last four games, winning one and losing three. He now faces a stern test in Man United, as the Hornets look to rise from their lowly 17th spot and take a step towards surviving a season in the Premier League.

Manchester United have had a poor season so far. Their opening day 5-1 win provided promise for fans that this season could finally end an 8-year wait for the title. However, the season went downhill after that, even after the return of Cristiano Ronaldo. Both Ronaldo and manager Ole Gunnar Solskjaer have come under fire in recent times, with Solskjaer’s reign said to be on its last legs now, especially after back-to-back home losses against arch-rivals Liverpool and Manchester City. The Red Devils failed to score in either game, and conceded 7 goals in total against both Liverpool and City. The team and the coaching staff as a whole have come under immense criticism this season and after 11 games, their title hopes are all but over, with the club in 6th spot and 9 points away from the top spot. It will be a challenge to guarantee a top 4 spot, and with a team full of superstars, it remains to see how the Red Devils bounce back after a tough period.

Watford FC will be without defenders Francisco Sierralta and Christian Kabasele, with both of them missing out through hamstring injuries. Midfielder Ken Sema suffered a knee injury before the international break, ruling him out of international duty with Sweden, and is set to miss out against Manchester United as well. There are few more players on the treatment table for the Hornets, with Kwadwo Baah and Peter Etebo expected to be sidelined for some weeks. Midfielder Juraj Kucka will also be unavailable for Watford this weekend, after being sent off against Arsenal in the last gameweek.

Man United suffered a blow in the international break, with midfielder Paul Pogba suffering a thigh muscle injury with France. He joins his fellow countryman Raphael Varane on the sidelines and is expected to be out for a few weeks. However, Pogba was already suspended for three games and was set to miss out against Watford and Chelsea next weekend as well. Left-back Luke Shaw pulled out from the England squad with a concussion that he suffered against Manchester City before the international break, but is set to return to the squad. Fellow Red Scott McTominay also pulled out from the Scotland National Team and is a doubt ahead of the trip to Watford. Striker Edinson Cavani sat out the defeat against City and did not join up with his national team as well, and remains a doubt for the weekend as well.

To say United are going through a bit of an identity crisis right now would not be an over-exaggeration. The Red Devils started the season well, with a team that looked like it had adopted a playing style of high-pressing and quick passing. However, in the past couple of months, they have gone from title challengers to a team that seems unlikely of even securing the top 4. They have some big names in their backline, and after a decent 20/21 season defense-wise, it is a surprise to see the United defense struggling so much.

In recent games, Ole Gunnar Solskjaer has tried out a 3-man defense, with Harry Maguire, Victor Lindelof, and Raphael Varane, and Eric Bailly deputizing for the injured Varane against City. However, while the 3-man defense worked against a beleaguered Tottenham Hotspurs, they were exposed against Manchester City, with the Blues not showing an inch of complacency to let their rivals back into the game. With just 2 clean sheets in 11 league games and 17 goals conceded, questions have to be asked as to why the defence is so weak. The signing of World Cup winner Raphael Varane was meant to strengthen an already solid defense, but it hasn’t worked out as well so far. The Frenchman has been a different class whenever he’s played, but injuries have limited his playing time at the club so far.

Watford will be confident of having a chance of securing a good result, with the Hornets having beaten the Red Devils 2-0 at Vicarage Road the last time the two teams met here. With United going through an unsettled period right now, Watford’s attack of Ismaila Sarr, Emmanuel Dennis, and former Red Josh King will all be on their toes to make life as difficult as possible for United. Anything other than a win for United will dump even more pressure on the Norwegian manager, and the team as a whole. With their playing style already being called into question, it is past time for the United superstars to step up and show their class. Watford, albeit posing a lesser threat than the likes of Man City and Liverpool, are still a tricky opposition to beat. United have looked vulnerable on the break, and that could play right into Watford’s hands who will let the 20-time league winners have more of the ball and look to hurt them on the counter.

The young Senegalese winger has been the Hornets’ shining light so far, with 4 goals in the league so far. He has continued his Championship form into the Premier League, which has brought delight to Watford fans. He is a fan favourite at Vicarage Road, and Sarr is repaying the belief and faith shown in him by both Xisco Munoz before and now Claudio Ranieri.

The 23-year-old winger has wonderful dribbling skills and has the pace to beat his man easily. He has the most shots, has completed the most dribbles, and created the most chances out of anyone on the team, cementing his status as one of the most important players in the team. He has made the right-wing his own with his wonderful performances, and with the club now threatened with the prospect of relegation after finding themselves in 17th position.

Ismaila Sarr will be key to Claudio Ranieri’s men and their performance against United on Saturday, and he has shown his class since the beginning of the season. Sarr will be very crucial as he is the team’s top scorer, but also one of the chief creative outlets for the Hornets. Against a struggling United defense, he will look to isolate and trouble Luke Shaw on the right flank as much as he can.

The Manchester United talisman has not been exactly in-form and hasn’t been his older self that we saw when he first arrived in England more than a year ago. When the Portuguese struggle, the rest of the team struggles as well, with his ability to create chances and make things tick for United. So far, he has 4 goals and 3 assists in the league so far and hasn’t scored since September when he faced Newcastle at Old Trafford.

He still has been influential though, forming a good partnership with his compatriot Cristiano Ronaldo, when much was made of his ability to play with the superstar at the start of the season. He was brilliant in the game against Tottenham Hotspur, which was United’s last win in the league. Although his numbers have not been as good as last season, he has been the one to make it happen for his team. With Paul Pogba not exactly in the best of forms, and Marcus Rashford still finding his feet after a long injury layoff, the creative burden has fallen on him, and he has been the only one to create dangerous chances for the United attack.

His form is crucial to Man United’s play, and Solskjaer will be hoping he gets his Portuguese star back up in last season’s form soon. Watford on Saturday provides a really good chance for Fernandes to get a goal or two and get back into his groove.