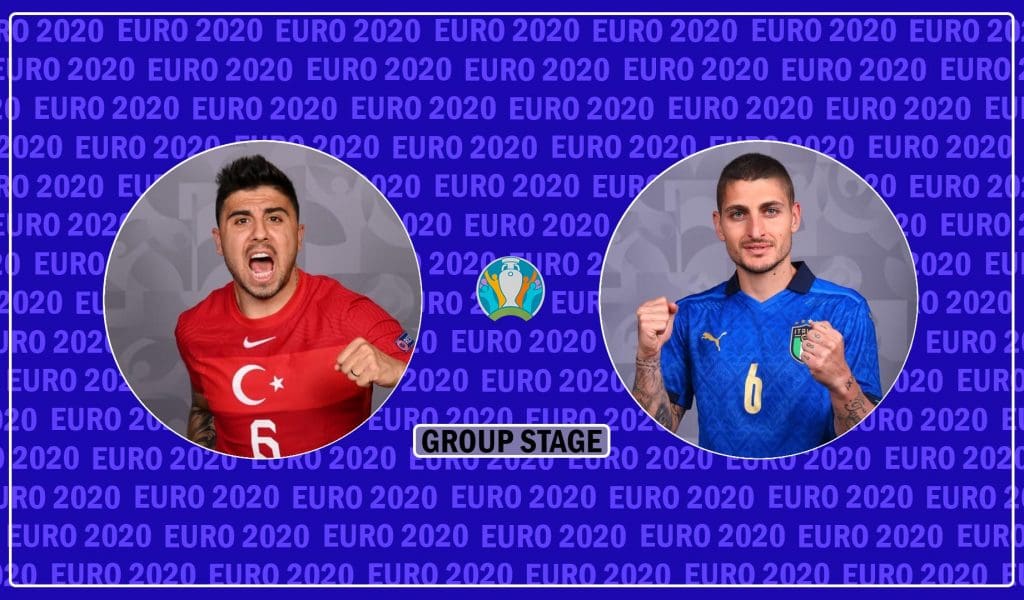 The UEFA Euro 2020 opening match will take place in Rome on Friday night, with Turkey taking on Italy in a Group A match.

Finally, the wait is over. The much-anticipated UEFA Euro 2020 will finally start off this Friday night with a Group A match at Stadio Olimpico pitting a resilient Turkey against an in-form Italy after a year-long postponement due to the pandemic.

While the Azzurri hope to take advantage of home advantage in Rome, their Turkish counterparts are hoping to avoid defeat in their first match of the competition for the fifth time.

Turkey had a strong Euro qualification campaign, finishing second behind France in Group H, losing only one of their 10 games and allowing only three goals. The heartbreak of relegation in the UEFA Nations League followed, with the Crescent-Stars unable to get going in the event last year, playing out a series of draws and losing to Hungary twice. However, Senol Gunes’ team, has gained some momentum coming into the Euros, having won four of their six games since the turn of the year, including a 4-2 victory against the Netherlands in the World Cup Qualifiers in March.

Italy, a four-time world champion, will combine great experience with youthful energy this summer as they aim to break a half-century of European Championship disappointment with one of their most highly regarded squads in recent memory.

The Azzurri have been on a roll under Roberto Mancini since suffering the humiliation of missing out on the 2018 FIFA World Cup. The Azzurri breezed through their Euro Qualifiers, dominating Group J with ease after winning all ten of their games, scoring 37 goals and conceding only four.

Owing to its unique record under coach Roberto Mancini, who has turned a team lacking in direction and belief into a slick, well-oiled winning machine since his appointment in 2018, La Nazionale will play each of their group stage games in Rome, beginning with a tense opening night match against Mediterranean rivals Turkey.

Turkey had no significant absentees heading into the crucial encounter on Friday. For the game against Italy, manager Senol Gunes can use his complete squad. The Crescent-Stars are anticipated to play in a 4-1-4-1 formation, with goalkeeper Ugurcan Cakir protected by two banks of four and five players, respectively, and captain Burak Yilmaz serving as the lone striker. It can also change into a 4-4-2 with Yusuf Yazici moving upfront, alongside Burak Yilmaz.

Under Gunes, Turkey has been renowned for its defensive stability and discipline, which is anticipated to be on display once more this week. Merih Demiral of Juventus and Caglar Soyuncu of Leicester City will form the backbone of Turkey’s defence, supported by Zeki Celik and Umut Meras, who will be encouraged to press forward on occasion.

Okay Yokuslu, who will play as a holding midfielder, will take on additional defensive responsibilities in the hopes of disrupting Italy’s midfield runners. Ozan Tufan, who will be playing more of a box-to-box role for Turkey, will most likely assist the 27-year-old. Yusuf Yazici will play in the other attacking midfield slot, with his major responsibility being to provide assistance to Yilmaz at the top.

Unlike Turkey, Italy has already suffered a pair of injury setbacks heading into the tournament’s first match. After suffering an injury during training, Stefano Sensi had to be replaced by Matteo Pessina earlier in the week. However, following the squad’s formal submission, Lorenzo Pellegrini has suffered an injury and has been ruled out.

Italy has written to UEFA to request a replacement, with Gaetano Castrovilli set to join the squad. Marco Verratti, the Azzurri’s key midfielder, is also out due to a knee injury, but he could return in time for the Azzurri’s next group match.

In goal, Gianluigi Donnarumma is a sure bet as he seeks to put his club’s future concerns aside and concentrate on the task at hand. Although Alessandro Bastoni is more than a feasible option for the manager, the seasoned Juventus pairing of Leonardo Bonucci and Giorgio Chiellini are poised to start as the centre-backs. Alessandro Florenzi and Leonardo Spinazzola pick themselves out in the open.

Jorginho is the clear starter at the base of Italy’s three-man midfield unit, having just won the UEFA Champions League with Chelsea. Nicolo Barella, who played a key role in Inter Milan’s Serie A title, is also a sure starter in the centre, where he will attempt to provide the creative spark. In the absence of Verratti, Manuel Locatelli is expected to take over as Azzurri’s third midfielder.

In terms of the offence, Ciro Immobile leads the line ahead of Andrea Belotti and newcomer Giacomo Raspadori, with Lorenzo Insigne on the left-wing providing support. Domenico Berardi, on the right side, may just push out Federico Chiesa for the starting spot on Friday.

What lies ahead for Lukas Nmecha this summer?
Tino Livramento: Chelsea’s own Hakimi
To Top