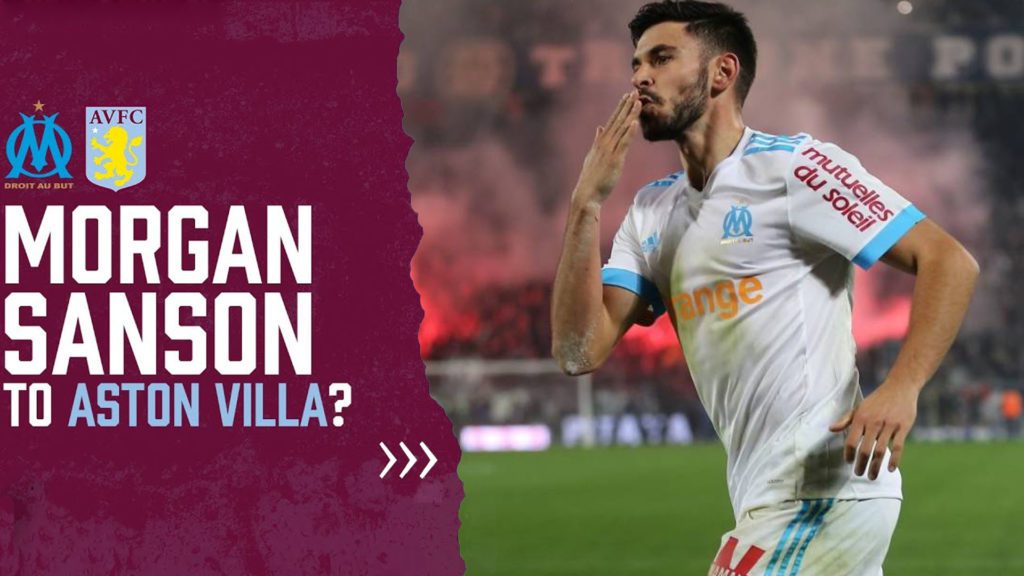 We are halfway through the January window and Morgan Sanson of Marseille is once again linked with Aston Villa. Villa is in talks for a £15 million deal with the midfielder and have taken huge leaps recently in order to seal the deal.

Conor Hourihane is expected to leave Villa Park this month reporting to which Dean Smith’s side has regained their interest over a move for Sanson. The Ligue one sensation has been linked to Villa multiple times with rivals Everton sniffing around to get the taste of Sanson, most of the times.

Looking at Sanson’s performance in the Lique 1, I can assure you that he surely is one lad capable of playing in the midfield alongside players like Ross Barkley and John McGinn.The 26-year-old is a bucket of talent and possesses skill set that only a few have. His style of play is typically one which would fit into Dean Smith’s tactics. He is both a goal-maker and possession-breaker who knows how to contribute as well as tackle. Morgan lacks ability in the air but does cover things up with offensive flair being apt in dribbles, pin point passes and making sure the ball ends up behind the keeper.

Morgan Sanson has already been involved in five goals this season for Marseille in 11 games that he has played. In 120 games for the French giants, Sanson has found the net twenty-two times and has been the direct reason his teammates have scored goals thirty times.

The Frenchman provides stability in the midfield while adding some flair in the field. He is more of a playmaker who likes to control the pace of the game paring with his involvement and can turn into someone who wins the game for Villa single-handedly.

This season, he averages 0.24 goals per game while providing 0.37 assists in 90 minutes, not bad for someone who’d cost just twenty odd million and loves to roam around opponents final third.

Ross Barkley has been a sensation in middle of the park for Aston Villa, and his chemistry with Jack Grealish as well as Ollie Watkins has been icing on the cake. The Englishman was disregarded for majority of his time at Chelsea and many believed the once English golden boy is not more golden, but his spell at Villa Park gives us glimpses of everything we hoped he would turn into.

While Ross Barkley is on loan from Chelsea, Morgan Sanson would come for a longer term. The Frenchman is being viewed as a long term prospect who would bring glory for Villa with his talent. Barkley and Sanson both have a similar style of play and with chances of the former leaving back to Chelsea, Sanson can chip in for his place. However, the management would want both players to stay and challenge each other in order to bring out the best.

Sanson’s place in Aston Villa still isn’t clear with midfield being mastered by the likes of McGinn, Luiz and Barkley. The Frenchman, however, is blessed with technical brilliance, ability to sneak past the defenders, tight ball control and a knack to retrieve possession. And it is these abilities that will cause a healthy selection headache for Dean Smith.

The main reason for Villa to buy Sanson would be to strengthen their offensive arena. His role in the side would not only be to create goals but to score one. For a player blessed with both creativity and pace, this is the least a coach would ask for.

Ross Barkley, on the other hand, have been brilliant since his arrival and benching him for Sanson would not be Dean Smith’s preferred option (obviously if Barkley stays). The Englishman has done all that his new coach has asked him to, be it covering majority of the field or playing quality football with ambitious mindset. The midfielder has already impressed his new coach and to make Smith bench him would be a lion’s task for Sanson.

All things said, healthy competition between Sanson and Barkley would reap more benefits to Dean Smith than either player alone.

The Frenchman I feel is one step ahead of Barkley, wholly and solely because of his defensive contributions. He is as adept in the latter half of the line as he is in the attacking quadrant, and rarely do we see a midfielder who is a both a threat to opposition and a wall for his team.

Sanson could really boost the attacking engine room of Aston Villa who is already filled with the likes of Jack Grealish, El Ghazi, Trezeguet and Traore. His sheer relentless and never give up attitude will be a moral booster for a team who tastes more defeats than victories. But, it surely makes sense for Dean Smith to focus on Barkley as of now as has proved to be a key cog in Villa’s wheel. However, if Blues are to buy him back, Sanson surely fits in the list to fill in his shoes.

So, it’s Sanson who should be bought as soon as possible but until then Villa should enjoy the luxury of Ross Barkley.

Club hero or disappointment? How will Arsenal fans reflect on the career of Mesut Ozil
Should Newcastle United sell Javier Manquillo?
To Top