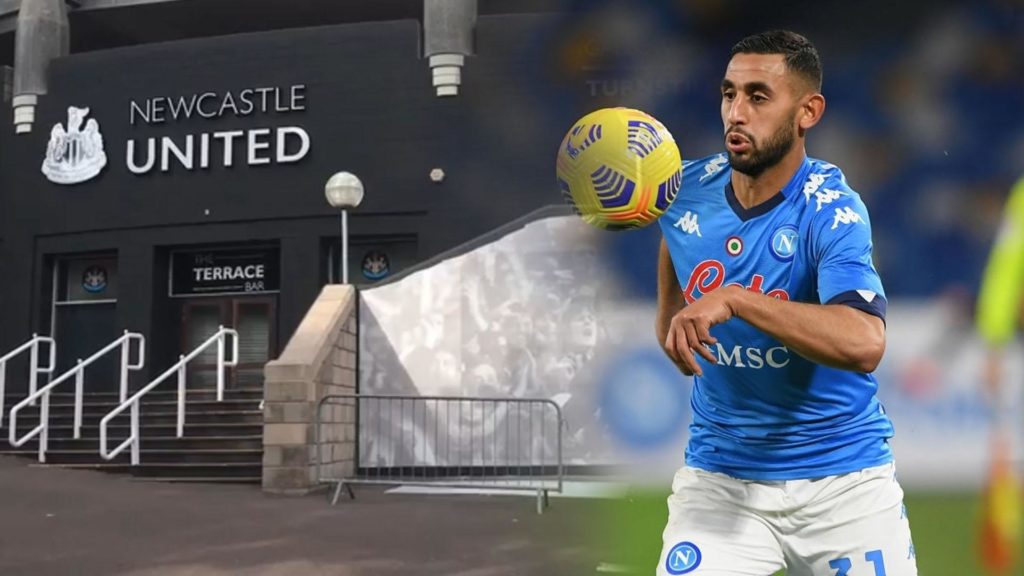 According to Le Buteur-football news outlet in Algeria, Newcastle United are hoping to sign Faouzi Ghoulam from Serie A giants Napoli in this January transfer window.

The report also claims that Newcastle are already in contact with his agent, Jorge Mendes, and are closing in on a loan deal for the Algerian.

The Toons had been linked to him a year ago and also submitted an offer, but only for the player to reject the loan move and decided to fight for his place in Naples.

The 29-year-old full-back is a seasoned veteran for Napoli who made over 200 appearances since arriving from Saint-Étienne for a reported £4.50 million move.

He is a solid full-back who can cover a variety of positions down to the left-hand side of the pitch. He is also a former Algerian International but most of his career has been ruined by injuries.

Faouzi Ghoulam has not made more than 15 appearances a season for more than three years now for Gli Azzurri, and now he has seen his playing time diminish as he is further down in the pecking order since the arrival of Mario Rui as back-up to Elseid Hysaj in the left-back position.

It’s his attacking threat for which he was renowned for under Benitez. He delivers quality balls into the box. He has good hold up play up on the left side of the pitch. Not an aggressive dribbler but is very quick and powerful and can trackback easily.

The Algerian can run up and down the wing tirelessly and is especially good at joining attacks. Ghoulam is also a tremendous passer, capable of switching play to the opposite wing with a raking 40-yard pass or picking out the run of an advancing forward with a beautifully timed and weighted through-ball. He also is a very handful in set-piece situations as he can deliver those lofty balls into the box and more than often his crosses are of pinpoint accuracy.

His weaknesses include his lack of concentration and commitment while defending. He very rarely commits to tackles and leaves big spaces behind him in a one-on-one against decent wingers. His style is to close down a player then launch tackle but it often sets the opposition winger on the loose to exploit space behind him. He likes passing forward and starting attacks, but those balls can at times be sloppy and go straight to opponents.

It seems the Magpies are back again for a left-back in the market. It was only last summer when we paid a hefty transfer fee for Jamal Lewis. After a decent start to his Toon career, he faded a bit and delivered some very poor performances. He often loses concentration while defending and is exposed frequently.

While in the right-back area Steve Bruce’s side has three players in their roster; Javier Manquillo (is solid defensively but doesn’t provide an outlet going forward), DeAndre Yedlin (will be a free agent by this summer), and Emil Krafth (struggles against pacy wingers due to his slow pace). So, if we do need a full-back we should buy one, who can cover both sides of the pitch.

The puzzling thing is why we haven’t moved for Jetro Willems. We need to upgrade our fullback positions to give us any chance of not be involved in a relegation scrap. Just look at Fulham, for example, they were all over the place when they began their campaign (they suffered heavy defeats) then they brought Kenny Tete and Ola Aina as quality replacements for full-back positions after that they look more solid at the back and good offensively. So, it’s a conundrum Newcastle United need to resolve as soon as possible, otherwise, they will be in a precarious position come February.

As for Ghoulam, his rare outings in the Serie A this term suggests Ghoulam may not be an upgrade on any of the players Bruce has already called upon to play at left-back in the Premier League this season. It may be a risky arrival.

Chelsea to revive themselves against Fulham?
Why Ainsley Maitland-Niles isn’t a left-back
To Top