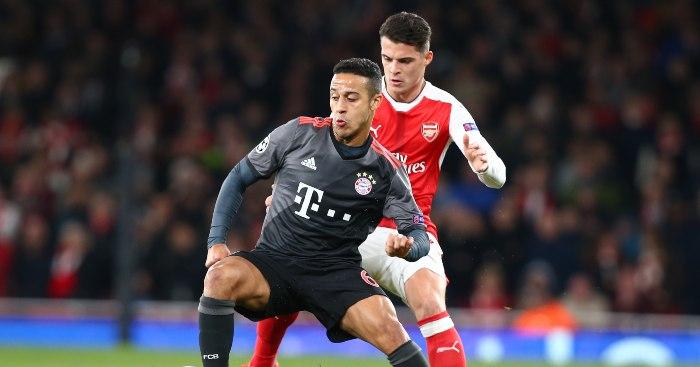 Liverpool vs Arsenal is undoubtedly a heated contest, and you get to see two teams with vastly contrasting styles go at each other, but this may be just the match up for which we have all been waiting. Arsenal has come up trumps in the last two meetings, and Arsenal’s 3-4-3 is certainly proving to be a formidable structure to break.

While Liverpool may not have had any real intent or hunger to win in the last two matches against Arsenal, a revamped side with the likes of Thiago and Diogo Jota seems like it may just infuse some more energy into this already star-studded line-up.

Let us take a look at how Thiago Alcantara and Granit Xhaka can be pivotal parts in the team and the tactical battle that can follow in the middle. Thiago came on against Chelsea in the second half and immediately broke records for all the right reasons. He completed the most passes in the half and looked totally at ease with the ball.

Both of them play in almost the same position but under managers who have somewhat different philosophies. Thiago new to the Prem – plays under Klopp, who has always gone to a 4-3-3 formation with a star attacking trio and a midfield that likes to press high up the filed.

Thiago here is brought to play as a solid holding midfielder, but his long passing range also means that he can assist in the fast-paced counter-attacks that Liverpool adore. In my opinion, he will be more instrumental in orchestrating the attacks from the back, and his creativity and composure on the ball will bring him more liberty to take the ball forward and occasionally play as the deep pivot or a position that is similar to that of the quarterback in the NFL.

Embed from Getty Images
While Xhaka also plays in the same deep pivot role but under Arteta and his 3-4-3 formation, I feel that he is more of a cover to the defence and used primarily to break up the attacks of the opposition. A rigid figure in the back which forms the first line of defence.

Both of them have great character on the field and rouse their teammates. Xhaka may have had some mixed performances, but he seems to have found new life under Arteta and has become a cornerstone of the team, albeit one which is not easily noticed.

This tactical battle undoubtedly lines up to be a feast in the middle of the park and their performances on the respective day can have a big say in the result of the game and overall performance of their team.