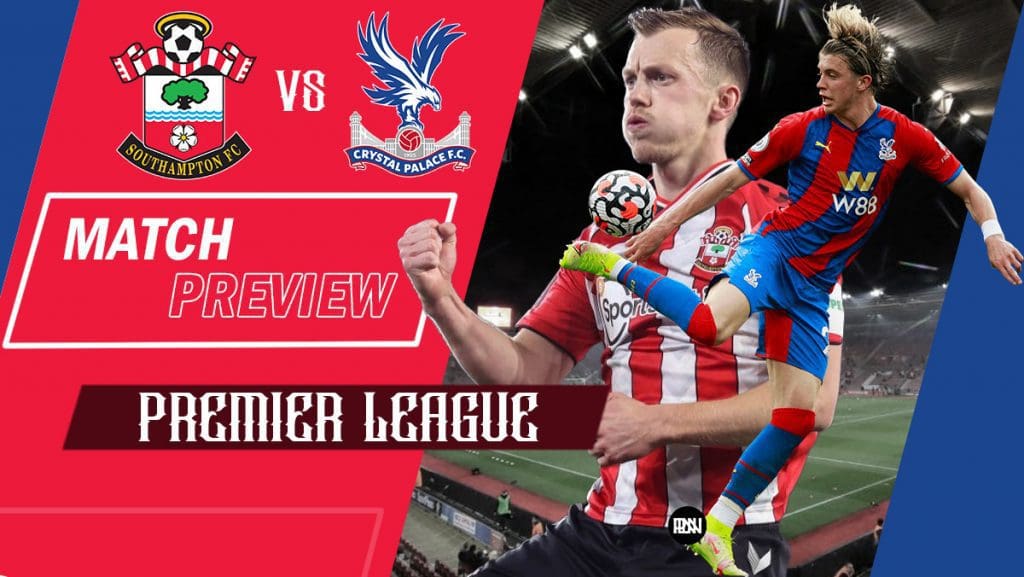 Southampton host Crystal Palace this weekend, and this one is an exciting bout, with both clubs eager to finish their season inside the top half of the league table.

Southampton were involved in a very lively affair last weekend, with the Saints drawing 2-2 against Brighton and Hove Albion away from home after the Seagulls took an early lead against the visitors through Danny Welbeck, and then doubled their lead just before halftime. However, James Ward-Prowse had other plans, as he led the Saints fightback with a sublime free-kick that saw them half the deficit in stoppage time of the first half. Southampton then started the second half in the same fashion as they had ended the first, and they got their second inside the first ten minutes, with the captain stepping up again. Ward-Prowse led from the front with his brace and secured a hard-earned point for the Saints.

However, that draw meant that their miserable run continued, with just one win in the last eight league games. A win on Saturday will do the Saints a world of good, with their aim to finish in the top 10. The draw against Brighton left them sitting in 13th place, just one point ahead of Crystal Palace.

Crystal Palace comes into this game with a slightly better form than Southampton, although the Eagles have won just one in their last 5 games in all competitions. Their last win came against Arsenal, which was a comprehensive 3-0 win at the start of April. However, since then they have lost three consecutive games, and have drawn one. The Eagles are coming off a heated goalless draw against Leeds United, where they put in a decent shift and created better chances, but were let down by some poor finishing and some outstanding saves by Leeds goalkeeper Ilan Meslier. Manager Patrick Viera will be hoping for an improved performance from his side as the Frenchman aims for a win on Saturday and break their run of winless games.

Tino Livramento, the young Saints fullback, was subbed off last weekend with a horrible ACL injury, and has been ruled out for the remainder of the year, the club confirmed on their website. The 19-year-old has been a regular feature for the Saints this season following his move from Chelsea and will be a big miss for Ralph Hasenhuttl. Goalkeeper Alex McCarthy is the only other injury concern, as he continues to recover from a hamstring injury, and will be expected to miss out on Saturday’s game. Hasenhuttl has a strong squad to choose from for the weekend, with everybody else fit and firing.

Crystal Palace will be without Nathan Ferguson, who could very well miss out on the remainder of the season through injury. English fullback Tyrick Mitchell is also a huge doubt for the Eagles and will face a late fitness test. However, midfielder Luka Milivojevic is expected to return to the squad after recovering from a thigh injury and is set to be in contention. Patrick Vieira could shake up things in the lineup, after the goalless draw at Leeds United, and look to add more attacking intent into the starting 11.

James Ward-Prowse is Southampton’s go-to man in the big games and has performed when it matters. Ward-Prowse has been one of the finest servants for the Saints and this season as well, the Englishman leads the goal contributions chart for the Saints. He is a big danger from set-pieces, with his ability to score from dead-ball situations, and his superb corner deliveries. He was on hand last week, scoring a brilliant brace for the Saints, and will be the danger man again on Saturday. If Southampton earns a foul anywhere near the box, Ward-Prowse is sure to step up and try to find the top corner of the goal. Ward-Prowse needs one direct free-kick goal to match his idol David Beckham’s single-season record of five, and he will be hoping to do it against Palace.

The on-loan Chelsea player has really enjoyed a stunning campaign in Patrick Vieira’s midfield, becoming the key cog in an ever-evolving machine. His desire, passion, application, determination and willingness to go the extra mile as added some much-needed energy and spark to Palace’s midfield, unlike they ever harnessed during Roy Hodgson’s days at the helm, and his performances have earned him an England call-up. It is unclear where his immediate future lies with the uncertainty at Chelsea right now, but the midfielder won’t be worried one bit about that as he is confident is development and progress will carry on as time moves on. Eight goals and three assists from 29 appearances is nothing short of sensational, and again the 22-year-old will be looking to hurt Southampton with his relentless pressing.