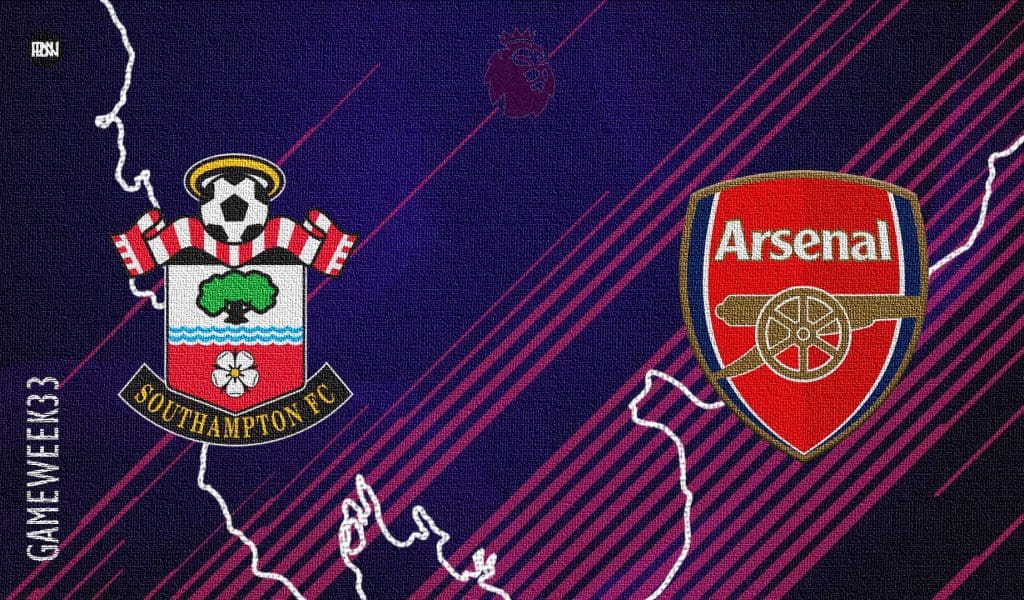 Southampton host Arsenal at the St. Mary’s, on matchday 33 of the Premier League campaign.

Both the teams are running on a dry spell, currently, without any sign of improvement. While Southampton will be going in the weekend on the back of a 6-0 thrashing by a rampant Chelsea side. Their opponents will not be coming on high confidence, either, after losing 2-1 to Brighton at the Emirates.

For Mikel Arteta and co. the sight of Champions League football seems to be slipping from under their feet. The defeat in the last game against a spirited Brighton side meant that Arsenal are on a run of 2 straight defeats against the mid-table teams. However, the concern as a whole lies in the team’s inability to score upfront. And this has been for a while now. Currently, however, the gunners have just managed to score mere 2 goals in their last 4 league games, while conceding 7 goals. Suggesting that it is not just the attack, even the defence is not helping the cause itself.

Arsenal have scored just two goals from their last 51 attempts.

Meanwhile, as far as Southampton are concerned, one can say that Ralph Hasenhutl has done a remarkable job in building the squad’s stability. But it has been more than 3 years now and the fans expect more than a mid-table finish, and rightly so! The team, supposedly, have not been consistent with their performances.  With 1 win in the last 6 league games, the Saints are just not keeping up to their paces, and have been often found throwing away the matches from a winnable position.

All being said, it ought to be an interesting battle between the two sides. Where Arteta’s men will try to avoid 3rd defeat in a row, to keep their hopes of Champions League football next season intact. While Southampton will push hard for the thousands of home fans, who want their team to break the shackles and move upwards from thereon.

The last meeting between the two sides

The last time these two sides met earlier in the season, it was Arsenal who triumphed over Saturday’s host in one of the most convincing performances from the Gunners. The match ended in a 3-0 convincing victory for Arteta’s men.

While thousands of travelling supporters will be hoping for the same performance from their side, Ralph Hasenhutl-on the other hand- will be looking to martial his troops to avoid that kind of a result again in front of the home fans at the St. Mary’s.

SNEAK PEAK: Players to look out for

The young English winger has been a beast in the making and has been very adventurous upfront for Arsenal’s progress under Arteta. Bukayo Saka is the man in focus for the gunners. Even when they have not been in their best, the young English midfielder/forward has took it upon himself to pull his side out of the rubble. Saka’s impressive tally of 9 goals and 5 assists in the league, this season, has no doubt catch the eyes of many.

Not just this, the 20-year-old winger just won the “PFA player of the month award” for the month of March, shrugging of competition from the likes of Ivan Toney & Harry Kane.

Making perfectly timed runs in behind the defence- Saka can be a menace to Ralph Hasenhutl’s side. No doubt, Arteta will be hoping for more of the same from his young baller on Saturday.

Southampton’s go-to man in the big games just cannot be kept out of the limelight in a match of this intensity. Ward-Prowse has been one of the finest servants for the Saints and this season as well, the Englishman leads the goal contributions chart for the Saints.

This game for Ward-Prowse becomes much more important as not only does he have the experience to go against an opposition of the calibre, but the visitors are struggling to find balance in their midfield. They have been losing the battle of midfield, which the pundits of football term as the ‘heart of the game’. Thus, Ward-Prowse could be the key for Hasenhuttl’s squad as the Saints look to upset Arsenal.

Southampton will be pleased to hear about the timely return of Armando Broja (on loan from Chelsea), who missed the last game against his parent club.

In addition to this, Shane Long, Alex McCarthy and Lyanco, could possibly make a comeback from injuries in the game. Especially, given the fact how Ralph Hasenhutl suffered a massive blow last weekend against Chelsea, he will sure shot take even the slightest of chances to make a few changes if necessary.

Meanwhile, Arsenal have been handed a massive blow when it was confirmed that Tierney will be out for the whole season. Adding to the list that already holds the big names of the squad such as Tomiyasu and Partey.

The main talking point, however, remains Arteta’s left-back choice in Granit Xhaka from the last weekend’s loss against Brighton. That really did not work. So, there is more than a chance of Nuno Tavares occupying that spot in the coming weekend.