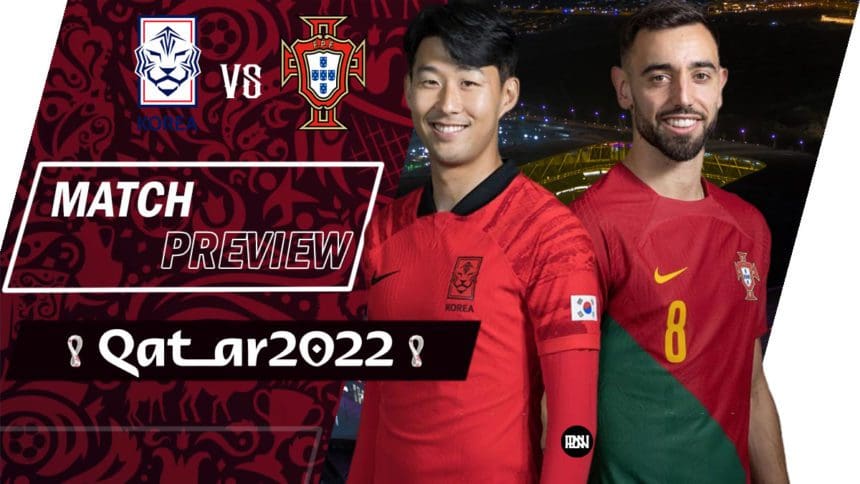 To this point, the World Cup in Qatar has been a huge success, delivering excellent football and plenty of fun for everyone involved. It is the last round of group fixtures and only few teams have confirmed their status in the knockout stages, with plenty of other teams still in the mix to make the top two spots in their respective groups. It is a similar story in Group H, where South Korea are battling to make the Round of 16 as they take on Portugal in the final game.

South Korea were on the wrong end of a 5 goal thriller against Ghana as they lost 3-2 to the Black Stars. The Koreans did brilliantly to comeback from a 2-goal deficit to level the scores, but Mohammed Kudus’ second goal just 7 minutes from the equalizer broke the hearts of the South Koreans as the Ghana team held on to the one goal lead till the final whistle despite sustained pressure by the Taegeuk Warriors. They now face a mammoth task as a result as they sit in third place now, having earned just one point from their first two group games. They will have to defeat Portugal in addition to the result in Ghana vs Uruguay going in their favour.

Portugal on the other hand will be somewhat relaxed heading into the game, having already confirmed their place in the Round of 16. They won both their group games so far, but will still look to consolidate their position at the top of the group. Ghana, in second place and on three points, have a chance to qualify at the top of the group, but will have to beat Uruguay by more than three goals and hope Portugal lose against South Korea. Manager Fernando Santos was pleased with his side’s performance in the 2-0 win over Uruguay which sent them through to the Round of 16, although he has insisted that there is still room for improvement. Portugal have to avoid defeat against Korea to cement their position as kings of Group H, but Korea will be a hard side to defeat given they have to win at all costs to qualify for the next round.

South Korea have no injuries or suspensions in their team, but will be without manager Paulo Bento on the touchline, after the Portuguese was shown a red card by the referee after the final whistle in their defeat against Ghana. Bento protested heavily after referee Anthony Taylor blew the whistle for full-time before South Korea could take a corner, which led to his sending-off.

Portugal will be without Otavio and Danilo Pereira with both midfielders missing out due to injuries. Young fullback Nuno Mendes is also expected to be absent from the matchday squad and potentially the rest of the tournament after he was forced off with an injury in their win over Uruguay.

If you are a fan of thrillers, Group H is the place to be on Friday. There are three teams still vying for the last qualifying spot and it is set to go down to the wire. South Korea have a few scenarios that will enable them to qualify ahead of Ghana, who are currently in the driving seat for the last spot.

South Korea have not had the best of World Cups so far, with their talisman and captain Heung-min Son not firing. He has not had the impact that he usually has, and as a result, Koreans have had problems upfront. South Korea need to win at all costs against Portugal, and will have to maintain a better goal difference than Ghana and Uruguay if they want to qualify alongside Portugal.

South Korea play in a 4-2-3-1 under Paulo Bento, with Son as the centrepiece of the team. They switch to a 3-4-3 shape in possession, with one of the midfielders dropping as the third center-back, which helps the full-backs to advance. Son regularly drops deep from central areas and looks to switch the play or pick out a pass to his striker. They like to maintain possession, but against a stronger Portugal team who have superior quality in midfield, they are likely to concede possession. This could be a problem for Son and Co, as it will be very hard to break down the organized Portuguese side. The Portugal attack is in brilliant form right now, especially Bruno Fernandes, who will look to expose South Korea’s defensive fragilities in the box.

It is a tough ask for a team not at their best level, to win against a squad which is one of the favourites to go on and lift the fabled World Cup trophy. However, the World Cup’s magic has seen stranger upsets take place, and South Korea cannot be ruled out just yet. It will be interesting to see how they cope without their manager on the touchline, which is sure to be a big miss.

Premier League players to watch out

If there ever was a time that South Korea needed Son more than ever, it will be on Friday. The Tottenham Hotspur forward has not stepped up to the mark for his national side this tournament, and fans as well as his teammates will be hoping he can regain his touch and take his side through to the knockout stages for the first time since 2010, and only for the third time in their history. Son will match-up against fellow Premier League player Joao Cancelo on the right flank, or Diogo Dalot, if Portugal manager Fernando Santos decides to rotate his side.

The Manchester United man is proving his doubters wrong time and again, and he did it once again in their win over Uruguay. The midfielder scored both goals in his country’s 2-0 win, to take them through to the knockout stages. Fernandes is having the time of his life on the pitch right now, with 2 assists and 2 goals in 2 games at the World Cup so far. He is everywhere on the pitch, creating chances, taking shots and even showing his defending skills when needed. Fernandes is undoubtedly one of the first names on the team sheet for Portugal right now, and he is tipped to continue his exploits against an unsettled South Korean team on Friday.

Clamour for Phil Foden’s selection vs Wales justified; will he start against Senegal?
Next Article 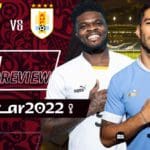