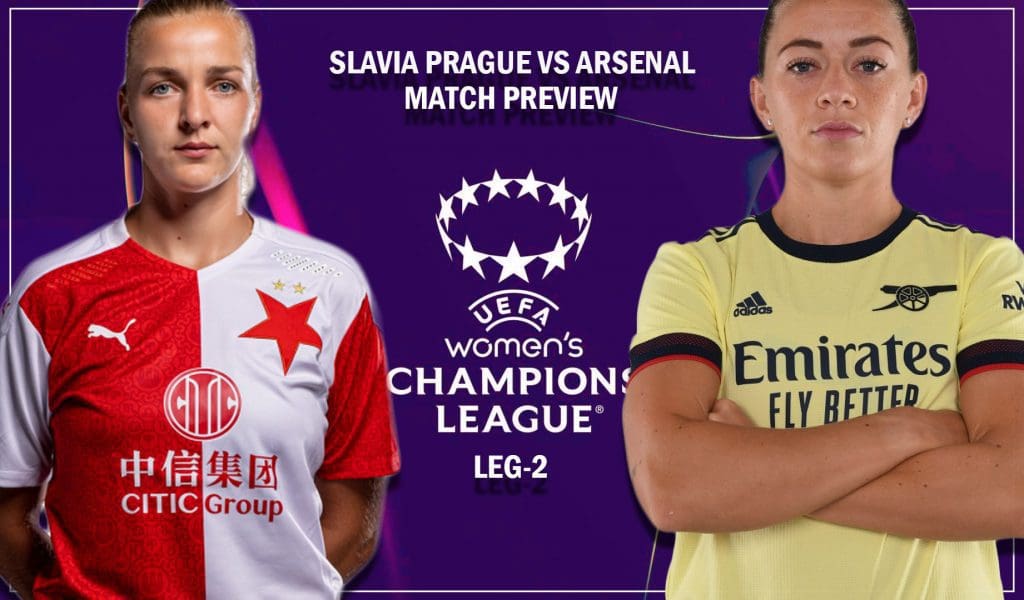 Arsenal will start the second-leg of their UEFA Women’s Champions League game against Slavia Prague this Thursday, as the Gunners plan to qualify for the expanded competition. With a three-goal lead heading into the match, manager Jonas Eidevall may be looking to experiment with the squad in this game.

Arsenal are now unbeaten in their last 13 fixtures, with their last loss tracing back to February of this year. After beating Chelsea 3-2 on the weekend, the team will be hoping that they are able to entertain the traveling fans. It’s also unlikely that new signing Tobin Heath will feature.

Slavia Prague have had a positive start to the league campaign, with three wins in three games putting them in 2nd behind city rivals Sparta. Unbeaten in the last 18 domestic matches, in a run dating back to June 2019, Slavia will hope that form can start to reciprocate in Europe.

Viki Schnaderbeck and Malin Gut will continue to serve the sidelines with knee and ACL injuries respectively, alongside Jordan Nobbs, who is out after getting an operation on her ankle. Caitlin Foord is unlikely to be featuring in the match, after suffering a slight quad strain.

Despite being 3-0 up, I wouldn’t be surprised to see Jonas Eidevall still wanting Arsenal to play on the attack. Commonly known as “playing the Arsenal way”, both the men’s and women’s teams seem to never want to hold onto a 1-0 or 2-0 lead, and instead play attacking football until the very final whistle. After owning up to making tactical mistakes against Chelsea, it’ll be interesting to see if he still adopts this playstyle.

With the way Eidevall usually plays, we should see a lot of goals against Slavia Prague, as the manager loves to press high up the pitch, keep the ball in the middle of the pitch, play counter-attacking football, and creates numerical superiority in the central positions with 3 forwards when tasked against a 4-3-3.

Something that has changed under Jonas Eidevall is the number of times that the fullbacks run into central positions when not given the chance to overlap if required to; thus creating confusion between the defenders, and when not picked up is a dangerous weapon which Arsenal will attempt to trigger. This is on display numerous times against Chelsea and I think we’ll also see it used against Slavia.

The creator for Arsenal in recent matches, Mana Iwabuchi will be a major threat against the Slavia Prague backline. After not appearing on the scoresheet in the first leg, Iwabuchi will be determined to get a few goals and assists on the board. With an eye for goal and playmaking feet, Iwabuchi is a naturally talented footballer and after an amazing strike against PSV, she’ll be hoping that she can also score many more goals in the Champions League.

Despite a disappointing performance against Chelsea, she was still able to collect an assist and have an impact as her split-second thinking may have won Arsenal the match. Mana will be looking to unlock the key for Arsenal at Meadow Park on Thursday which makes her my key player going into the match.

Slavia Prague’s star striker, Tereza Kozarova will be hoping that she can get the better of Arsenal with her goal-scoring abilities. After scoring 104 times since 2014, in the league alone, Tereza and her teammates will be hoping that she can score as she has for them so many times before. At 29 years of age, the Czech international will be wanting to compete at the highest of stages, and competing in the UWCL is the highest level of women’s football in Europe.