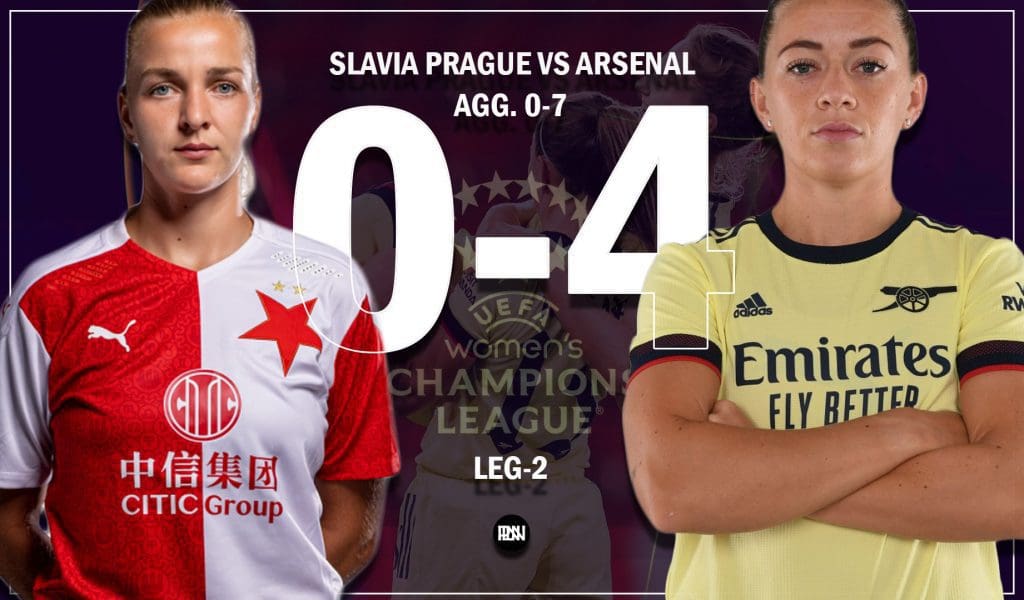 Match report of the UEFA Women’s Champions League clash between Arsenal and Slavia Prague, where Arsenal got the better of their Czech counterparts with a 7-0 victory on aggregate.

Arsenal started in their classic 4-3-3, with Iwabuchi playing as an attacking midfielder. A surprisingly strong side from Jonas Eidveall, with the only weaknesses seeming to be playing Lydia Williams ahead of Manuela Zinsberger, and Teyah Goldie being on the bench, but even those are debatable.

The first half was a dull affair with the best chance coming from Arsenal with Vivianne Miedema just losing control of the ball inches away from the goal. An agonising watch for any neutrals but the Gunners have been on the attack during the match.

Lia Wälti and Katie McCabe come on for Mana Iwabuchi and Frida Maanum. Seems to be an interesting swap, and despite the 0-0 scoreline, it seems to be a defensive switch.

Vivianne Miedema opened the scoring from a lovely Beth Mead cross. A beautifully controlled volley. And the Dutch GOAT doubled Arsenal’s lead after being in the right place at the right time which has always worked for her, and since her first goal, the game has really opened up for Arsenal. Viv scores her 100th goal for Arsenal (and it only took her 110 games) and it seemed something has clearly clicked after the changes from Jonas Eidevall as a succession of goals have quickly followed. With a genius fake shot which fools the keeper into diving, Viv calmly slots it into the bottom left corner. A brilliant player who gets a brilliant hattrick.

After Nikita Parris was brought down in the box, Kim Little took the ball, put it onto the spot, and fired it into the top corner. Captain and now Dr. Little has put Arsenal 4-0 up on the night and 7-0 up over both legs. And it’s only been eleven minutes since Viv’s first goal saw the back of the net.

And it’s full-time! A surprisingly tedious 4-0 win to Arsenal seals their place in the UWCL for next season. With Chelsea being the only other English team in the Champions League, after Man City were unable to progress against Real Madrid, Arsenal have a real good chance of going the furthest into the competition out of the WSL clubs this season. Jonas Eidevall must have clearly known what he was doing, as the goals came flooding in after his substations.

How can Manchester United lineup against Newcastle United? | Premier League 2021/22
How Andreas Christensen has put behind adversity to become an asset for both club & country
To Top