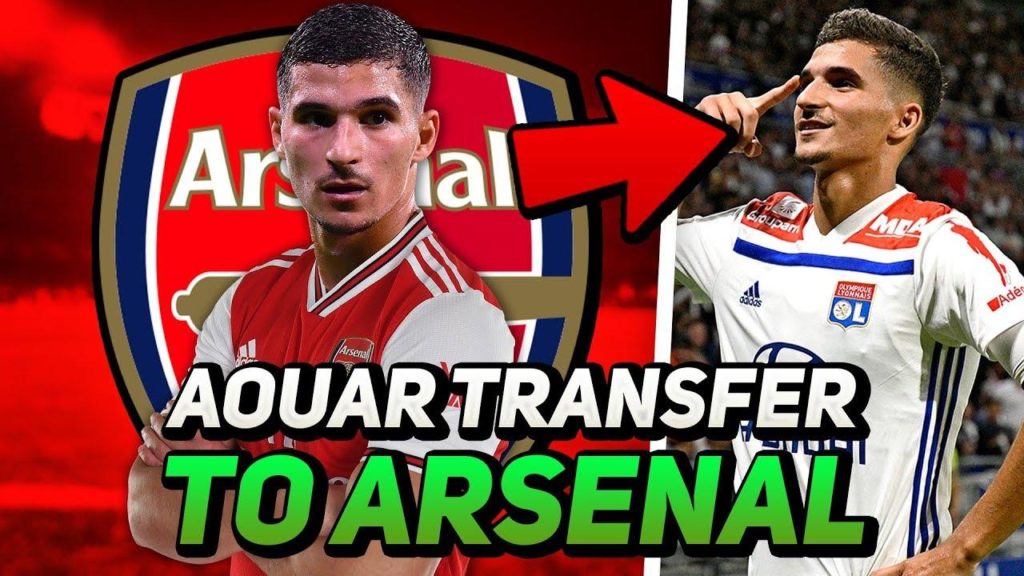 Arsenal are being very heavily linked with 22-year-old central midfielder Houssem Aouar. Reports are claiming that the Gunners are really determined to get the Frenchmen into their club. Aouar currently plays for Lyon is an exciting young talent that has been in the headlines for quite some time now. He was reportedly linked with the likes of Chelsea, Liverpool, United and now Arsenal.

The Gunners have been looking into Ligue 1 prospects for a while now, players like Nicola Pepe and Guenduzi and Alexandre Lacazette have all imports from France and are desperate to add Aouar to that list.

But with Arsenal already having an overload of Midfielders in their side, it begs the question: where will Houssem Aouar play at Arsenal.

Why Are Arsenal So Keen:

Houssem Aouar is still only 22-year-old and with immense potential, he was instrumental in Lyon’s run in the Champions League where they beat Manchester City 3-1 in the quarter finals. Aouar scored once and provided 4 assists in this campaign which saw Lyon turn out to be the surprise package. He averaged 1.8 shots per game in a Ligue 1 campaign that was cut short.

He was so good last campaign that he got a call up to the French national team, over some of the bigger names in the National Side. He couldn’t feature however as right before travelling he tested positive for Covid. But that doesn’t discount the fact that Didier Deschamps clearly saw how good of a player he is. Houssem Aouar is a technically gifted player, with great dribbling ability and an eye for goal.

Where Does Aouar Fit In At Arsenal?

Another reason why Mikel Arteta is keen on bringing in the player is because of his style of play. Arsenal have always been regarded as a team that plays beautiful football, with most of their passes being quick one or two touches and slicing the opposition up with those quick passes in and around the final third.

That is exactly the kind of football that Aouar plays, he makes quick short passes and moves into pockets between players to make room for his teammates. But he is also not shy to take on one or to defenders if the right pass is not on. He can turn players in tight areas which will be vital to Arteta against teams that play high pressing football.

Aouar completed 4.4 dribbles per game in the champions league last season showing how good he is on the ball. He also wins fouls in key areas often because of his ability on the ball.

With Arteta at the help the Gunners have scored some amazing goals with passes building out from the back, swift passing with forward players making runs between defenders and opening up spaces for midfielders. Which is a major part of Aouar’s game with his back to goal he likes to lay off passes for teammates and make one touch through passes.

The Gunners have bags of attacking talent in their squad, so how will Arteta fit the Frenchman into the squad. The preferred position for Aouar is attacking midfield where he thrives as a number 10. He can also play on the left wing cutting inside to create chances. But Arsenal will have to make a defensive sacrifice to play him in midfield as Aouar has very few defensive contributions.

If Arsenal do manage to get Aouar there will be many midfielders leaving this season, the likes of Mesut Ozil, Matteo Guendouzi, Lucas Torreira & Joe Willock could all see their names on the de[arture list. Arsenal already have an attacking number 10 in the form of Dani Ceballos so it will be interesting to see where Aouar slots in if they manage to get his signature.

Arsenal have already had a formal bid made for the player which was rejected by Lyon, who have said the bid was way short of the value of the player. With the French side wanting €45m for the midfielder, reports claim that Arsenal are preparing a second bid with Guendouzi heading to Lyon as part of their bid.

Aouar is a serious talent and an investment that could pay dividends for many years to come.