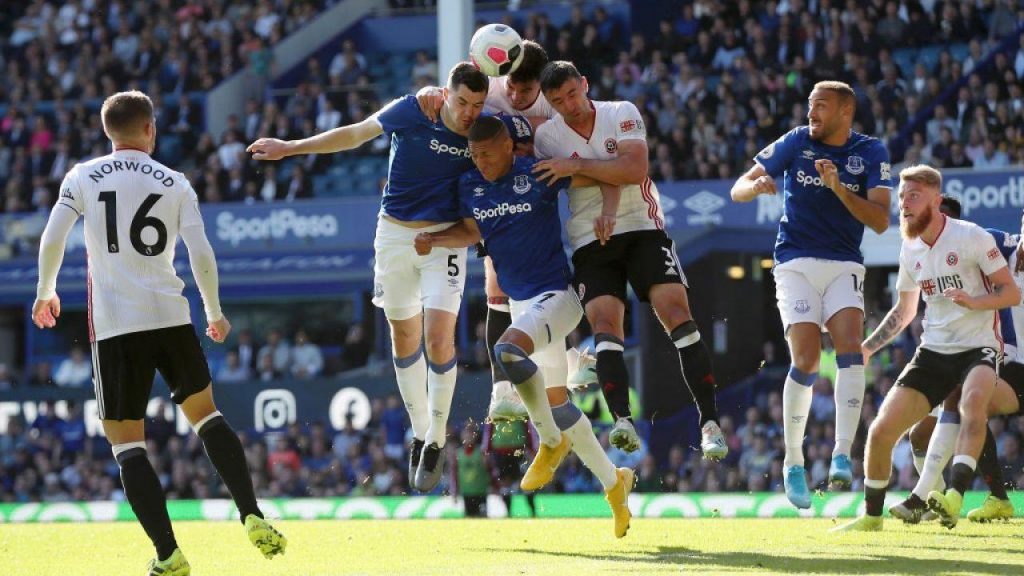 Sheffield United face Everton in their last home game of the season in the Premier League tomorrow.

The Blades host Everton tomorrow at the Bramall Lane in an exciting Premier League clash. Chris Wilder’s side have garnered 54 points from 36 games in the League so far. The Toffees have 46 points from as many games. Both teams are desperate for a win as the Blades are in the run for Europa spot and Everton want a top 10 finish.

Mason Holgate and Yerri Mina remain on the sidelines for Ancelotti’s side and the Italian will be forced to play a back three. The three centre-back formation has failed to impress in the past few games as the Toffees are on a four-game winless streak. Sheffield have a fit squad and miss two squad players – Leon Clarke and Luke Freeman.

So, without further ado, let’s take a look at the combined XI of both teams ahead of tomorrow game. The formation is a bit weird and unbalanced 4-2-3-1, but the intention was to pick players who have been very impressive for their sides so far.

Dean Henderson takes the goalkeeper spot in our combined XI. The 23-year-old Manchester United loanee has played 34 games this season and has missed both the games against United. He has 13 clean sheets so far and has made 95 saves in the league.

Everton’s full-back duo Seamus Coleman and Lucas Digne take up the wings in the four-defender formation. Coleman hasn’t been at his best this season but due to the unavailability of right-back in Sheffield, he takes the spot. He has featured 25 times for the Toffees. Digne has been brilliant as usual for Ancelotti’s side this season. In 33 appearances, he has bagged 7 assists so far.

Gylfi Sigurdsson takes up the number 10 role in the combined lineup. However, he has been forced to play a deeper role under Ancelotti and that has hampered his performances. He has featured 33 times and has contributed in four goals this season.

Richarlison and George Baldock take the wide midfield positions. The 23-year-old Brazilian has found his mojo back under Ancelotti. He has scored 12 goals this season and has also bagged 3 assists from 34 games. Baldock has started all 36 games under Wilder and has played his part in five goals this season.

Dominic Calvert-Lewin has been absolutely phenomenal for Everton this season. He has 13 goals to his name and is the obvious choice for the striker spot.