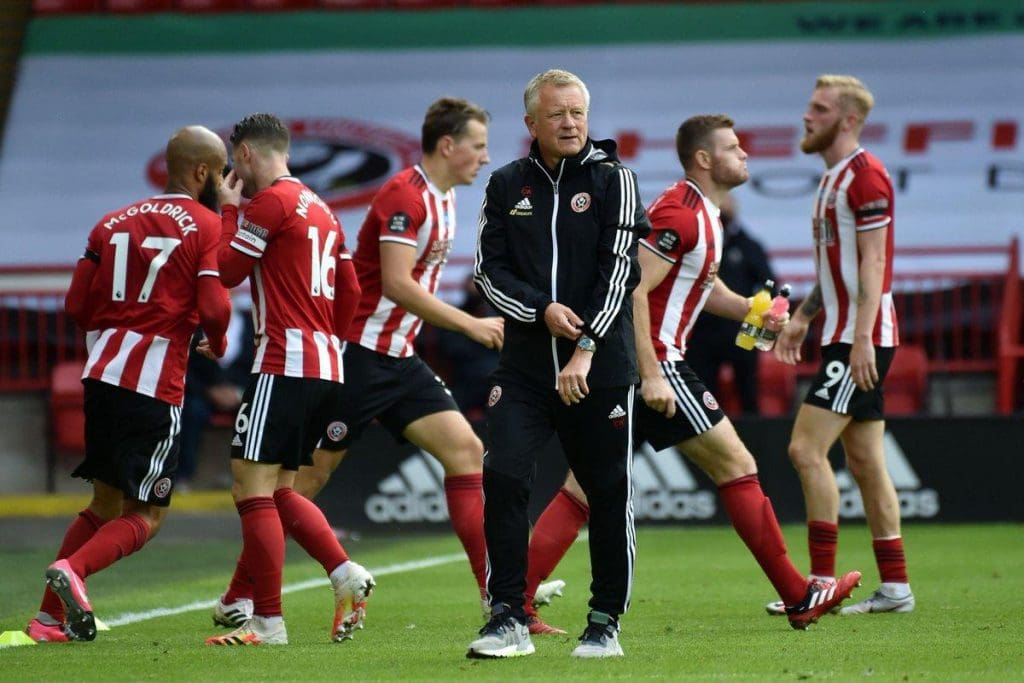 In the matchweek 37 Premier league fixtures, Everton make a trip to Bramall Lane to face off against an impressive Sheffield United team.

Sheffield are currently on a mission to get the European competition spot, realistically the Europa league, through Premier League position on the league table.

Facing Everton will be a very huge task for the Blades, especially with the Toffees’ team quality which looks to have an upper hand over Sheffield on paper.

Both teams facing each other on Monday evening will no doubt be focused on some players who are capable of commanding the outcome of a match with sublime performances. Sheffield and Everton are indeed blessed with quality players but few duels will be an intriguing battle all through the 90 minutes.

The Irish defender has so far won 4 points for Sheffield from each of the two goals, he scored against Burnley and Wolverhampton Wanderers.

Egan has been integral to the eighth-placed that has achieved unbelievable position in the Premier League table so far.

The 27-year-old has shown that he’s a tough defender and a fantastic ball playing centre-back. He has been playing an important role from the middle of a back three in Sheffield’s defence.

Due to his aerial prowess and game reading ability, his expected role in nullifying Calvert-Lewin’s threats and movements on and off the ball will be very vital for the Saints.

Dominic Calvert-Lewin looks to have been on a different level since Carlo Ancelotti took over as the manager. The 23-year-old forward had scored five goals in 16 games under former manager Marco Silva but under Ancelotti, the young talented striker has been involved in nine goals in 13 league games, scoring eight goals and assisting one.

When his other striker is failing, the Englishman has risen to the task in delivering goals consistently. And the Englishman will be looking to continue his impressive goalscoring form against Chris Wilder’s team..

Chris Basham has been a regular figure at the defence for the Blades this season. He has featured in all 36 league matches for Sheffield. He has consistently played a pivotal role in Sheffield’s impressive season in the top flight.

Playing on the right side of the three-man defense, the 31-year-old will undoubtedly be needed to curtail much of Richarlison’s threats from his domain.

The Brazilian attacker is not just a good forward, but his trickery, pace and finishing is part of his greatest qualities. His energy and ability to create chances for his teammates makes him more difficult to contain.

Richarlison has scored 12 goals and assisted three in 34 league matches thus far. Richarlison’s new position being deployed in by Ancelotti takes him more closer to the box and Sheffield’s defenders will surely have a lot to do to nullify his threats.

Sander Berge is already proving his potential in the Premier league so far. The young defensive midfielder has being really impressive for Sheffield, thereby, making it hard for Lundstram to get more playing time recently.

With Berge’s performances since the league restarted, it’s obvious that the young Norwegian took advantage of the lockdown to build up his stamina and his fitness level.

His ability to make decisive tackles and interceptions makes him a difficult player to play against. Especially his ability to cut off a counter attacking threats with his excellent reading of the game are part of why he’s such an asset to the team. He really plays the role of a defensive midfielder and gives his defenders much confidence with his presence.

If there’s any player capable of disconnecting or limiting Everton’s attackers from getting necessary services from their creative players, Sander Berge is undoubtedly the player to cause the Toffees such problem.

The 30-year-old Iceland international has been in the league for quite some time and his experience in the league conjoined with his quality can’t be overlooked. He has been one of the most respected playmaker in the league who has shown his ability to punish his opponents with his quality set-piece and through balls. His consistent displays over years is enough to prove and impose his quality over Sheffield’s midfield and defense.

A good tactician once said: “when the battle is won at the midfield, the game is half won”.

Oliver Norwood has combined well with the likes of Lundstram, Berge et al, Forming a strong five-man midfield in order to outplay their opponents from the midfield.

Norwood has being an ever present figure for the Blades who has been breaking down opposition passes. His ability to control the game from deep position will once again prove to be a useful tactic in order to overpower Everton’s technically gifted midfielders.

Before Andre Gomes had the terrible leg break, the Portuguese midfielder was producing consistent and high quality displays which makes someone wonder why he left Barcelona to join the Toffees.

A lot of doubts has clouded his return, wondering if he can rediscover his previous form but fortunately for him since his return from the lengthy injury, he has been able to win back his place and put himself back into the manager’s plan. Gomes has since been given regular playing time coupled with impressive displays like he never left. His tussle to gain the midfield control over Sheffield’s Norwood will be an exciting struggle that can change the outcome of the match.

The Scotland international has clearly been Chris Wilder’s favoured striker and looks like a guaranteed partner to either Lys Mousset or Billy Sharp. McBurnie looks to be having a difficult time in finding the back of the net but his all-round play has been of great importance to the team’s play and chances.

Sheffield United’s Mcburnie has an excellent hold up play, bringing his teammates into play with decisive passes. His strength and movements will undoubtedly give Everton defenders some problems unless he’s been marked by an intelligent defender who has same strength and ability to read the attacker’s movements like what Mason Holgate has shown he’s capable of doing.

Holgate has been a consistent performer for Everton since Carlo Ancelotti took over from former manager Marco Silva. The highly-rated centre-back has started in 14 out of 18 matches under the former Real Madrid boss. He has made himself the best partner to Michael Keane while displacing Yerry Mina from the first eleven.

The young Englishman has impressed tremendously under Ancelotti and he’s expected to play a prominent role for the Toffees against the Blades especially when he face up with Oli McBurnie.