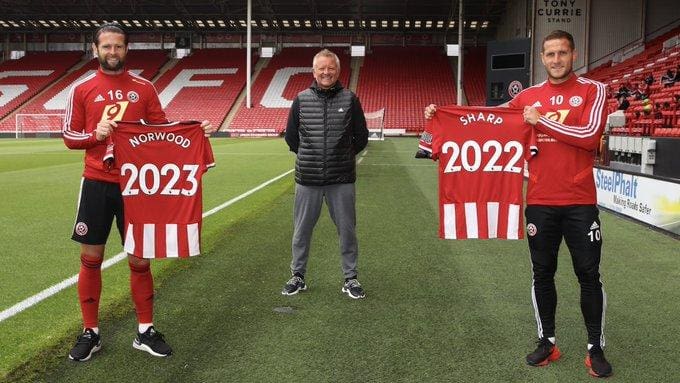 Sharp put pen to paper on a two-year deal, which will see him stay at the Bramall Lane till the summer of 2022. The forward has scored 93 goals in 197 appearances for the club since his return for a third spell in 2015.

Sharp has managed four goals for the Blades in the Premier League this season including their opener in the top-flight.

This club means everything to him.

Billy said following confirmation of the new deal: “This was a no brainer for me, personally. I’ve said previously about wanting to finish my career here and the talks were pretty simple.

“I want to be a part of this squad for the next two years and see what heights we can reach. The manager and the staff have pushed me to get fitter, stronger and have helped me become a better player. I was over the moon when the gaffer came to me and this feels like it is the best contract I’ve signed, but I’ve worked extremely hard on and off the pitch to earn the deal.

“I would have been looking over my shoulder going into my final year next season, but now I’ve got that bit of comfort which will enable me to keep working hard and contributing and I’m honestly really thankful to the gaffer who still sees me as having a role to play.

“We’ve done everything and more to be ready for the forthcoming restart, it’s been an unprecedented time for everyone, but it’s the same for all players and clubs and it’s going to be down to us to ensure we finish the season as high as possible.”

Norwood on the other hand will see his extension keep him at the club till 2023. Following his arrival from Brighton & Hove Albion in August 2018, the midfielder has featured in over 70 games for Chris Wilder’s team.

Norwood said after extending stat at Bramall Lane: “There’s been a deadly pandemic that’s hit the country, so it’s taken more time then we’d have all hoped, but I honestly wouldn’t have felt comfortable signing at a time when the club was in a bit of unknown in terms of what it would be losing financially.

“Obviously, though, I’m delighted to commit my future to a club that has had the best of me, but there is so much more to come as I continue to mature and grow as a player, it’s not as though I’m going to lose my pace!

“I’ll always been grateful to Sheffield United for giving me the chance to establish myself as a Premier League player, but we’re not settling for where we are now. We’ve all been written off in the past, but now we’ve made people sit up and take notice, we’ve proved people wrong for a long time now and that’s the mentality of the group.

“We’re now ready to finish the season off and who knows where it will take us. The lockdown came at a bad time for us as I thought we were just finding top gear. It’s been terrible seeing so many people lose their lives, though, so we’re conscience of the real world out there, but at the same time football returning is a bit of light at the end of a long tunnel.”

The pair will be involved in the Blades fight for an European spot as the Premier League prepares to resume on June 17.

Kai Havertz signing; a big statement by Chelsea says Craig Burley
Emile Smith-Rowe on conversations with Mikel Arteta while on loan
To Top