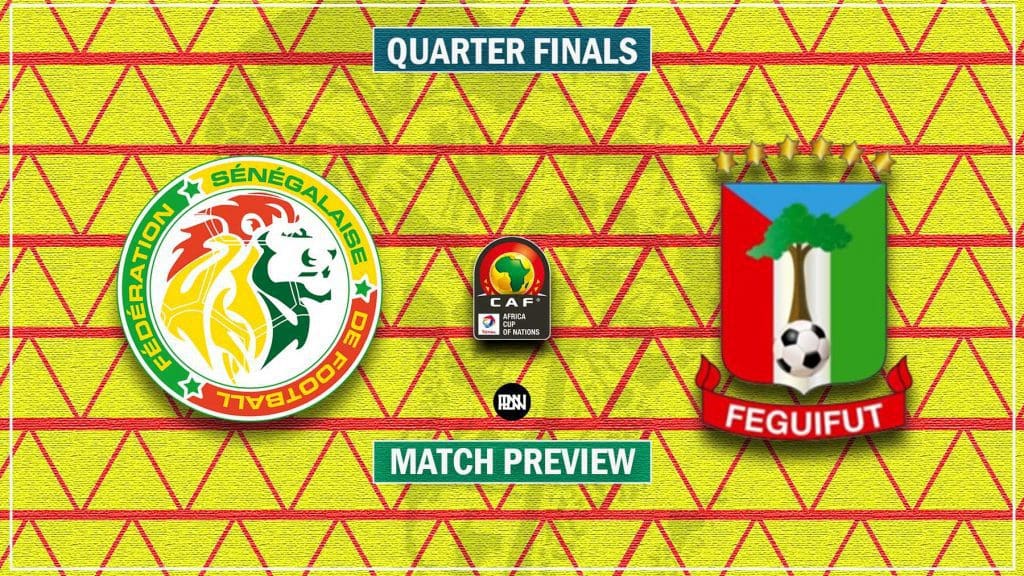 Filled with surprises and huge expectations, Afcon 2021 has presented the world with quality and shock moments in this edition with many African heavyweights crushing out. The quarter-finals of the tournament is in progress with Senegal taking on Equatorial Guinea on Sunday night.

Known from the beginning as one of the tournament favourites, Senegal have struggled to be at their best level collectively as a team despite their high profile players across Europe.

Equatorial Guinea on the other hand have shocked many in the competition and presented the unexpected reality of football having passed Algeria in the group stages and knocked out Mali in the round of 16 on penalties.

A 2-0 victory was enough for Senegal to book a place into the last eight as Sadio Mane and Bamba Dieng found the back of the net last Tuesday.

The National Thunder head into the game after another impressive result after knocking out a superior Mali side on penalties and will look to stun Senegal and continue their fine run in the tournament.

Liverpool forward Sadio Mane might come off the beach in this fixture after suffering a head injury in a brutal collision with blue sharks goalkeeper Vozinha in the round of 16. His replacement Dieng could come into the starting side after a brilliant performance against the Blue Sharks.

Meanwhile, The National Thunder will have to make do with the absence of Josete Miranda, who is suspended after picking up a yellow card for the second consecutive game.

In his position, Jannick Buyla could see his third start of the competition and another chance for the 24-year-old to impress Coach Micha. Equatorial Guinea will have the rest of their squad available and this a major boost coming into this game.

Senegal picked up a comfortable win over nine men cape Verde. This followed an unbeaten run in the group stages, where they claimed a 1-0 victory over Zimbabwe in their group opener on January 10 before playing out successive goalless draws against Guinea and Malawi respectively to finish top of Group B.

Despite their attacking adversaries, the Teranga Lions have a great defensive record in the tournament with many notable names from Europe’s elite clubs. The likes of Gana Gueye and Diallo of Paris Saint Germain have been crucial to their current position and performance in this tournament. Chelsea’s Edouard Mendy and Kouyate of Crystal Palace have all had great performances coming into this game. Skipper Kalid Koulibaly will be at the heart of the defense administering control and being a threat from set-pieces as well. Bounar Sarr has been excellent down the right flank anytime he surges forward bringing excellent crosses into the box of which most have not been converted by the Senegalese attack.

Senegal will look to create most of their chances from wide areas with their full backs high. There is no doubt in terms of quality in this side. Not just favourites for this tie but also one to keep a close eye on in this tournament. If there is anything this competition has taught us, it is to expect the unexpected and Equatorial Guinea will look to make the unexpected happen requiring immense concentration and discipline in this fixture.

Equatorial Guinea on the other hand are one of the surprise teams to have reached the last eight of the tournament having knocked out the Malians on penalties.

The National Thunders head into Sunday’s game unbeaten in all but one of their last nine games across all competitions, winning five games and drawing thrice with their defeat against Ivory Coast being the only exception. Being underdogs in this fixture presents the National Thunders with great confidence and a quest to stay strictly according to a game plan like they did against Mali in the round of 16.

Equatorial Guinea will look to sit back and soak the pressure from Senegal and eventually break on the counterattack to get in behind the experienced Senegalese defence. It is clear that Senegal are superior in all aspects of the game in terms of quality, composure, organization and the finishing touch. Equatorial Guinea will look to cause a major upset on Sunday night

FIFA’s best goalkeeper 2021 and the wall between the sticks at Stamford bridge, Senegal goalkeeper Mendy will look to be at his very best in this fixture. The Chelsea shot-stopper has not conceded any goal in this tournament and with the preferred backline of Sarr, Koulibaly, Diallo and Cisse, A clean sheet looks likely for the 2021 champions league winner. The Chelsea goalkeeper has 8 clean sheets in 20 appearances in the premier league this season and 55 saves to his name. With great goalkeeping positioning and reflex ability, Mendy will be crucial for Senegal if they are to progress into the next round

He should also be fit enough to join his teammates despite the collision between himself and Vozinha in the last game.