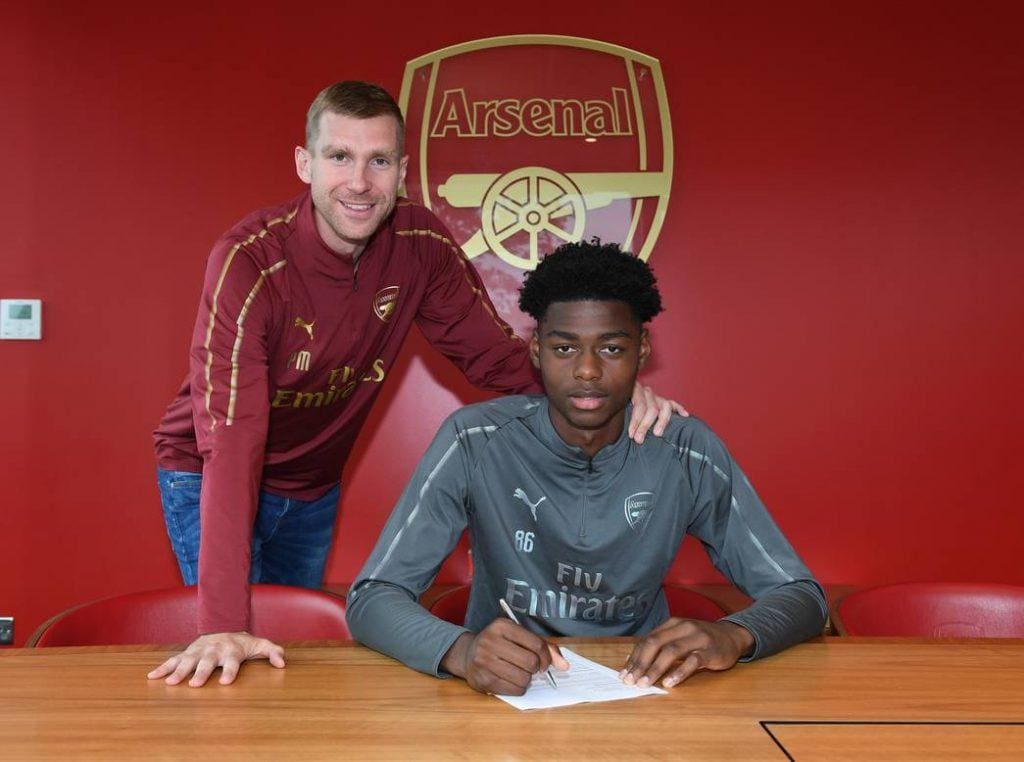 Arsenal might have signed and paraded some world class goalkeepers in the first team over the years but not much could be said about the amount of first team goalkeepers that has successfully made the transition from the club’s Hale End academy to the senior team.

Dating back to the late 90’s, a certain goalkeeper Stuart Taylor known as a perennial substitute goalkeeper, was the last product of Arsenal’s goalkeeper to have emerged from the club’s academy and made his way to the senior team.

At an early stage, he seemed potentially destined for a big future with his boyhood club (Arsenal), seeing off competition from more experienced goalkeeper Richard Wright, but unfortunately he couldn’t quite make the push to become the club’s No. 1.

Considering the rare occasion of seeing an academy graduate goalkeeper making a claim in the first team, Arsenal could be on the verge of witnessing the emergence of a wonderkid, who has received several raves for his quality between the sticks and high ceiling potential despite his young age.

Introducing the highly rated 19-year-old goalkeeper Arthur Okonkwo, who joined Arsenal at the tender age of seven and has since made the step towards the senior setup.

He has now spent over a decade at the club, first; featuring on the bench for the Under-18 side when he was still an Under-15 player until he came a prominent team member of the young side.

After years of hardwork, dedication and attention to details, the 2018/2019 campaign proved to be his notable breakthrough season, as he was able to showcase his worth and talent at both Under-18 and Under-23 level.

During that season, he kept 7 clean sheets and conceded 12 goals in 14 appearances across all competitions. Unfortunately, Okonkwo couldn’t add much game time to his tally as he missed the whole of last season, after being hit with a serious injury.

Before his horrendous injury, Okonkwo was frequently training with the first team squad during Unai Emery’s reign.

The 19-year-old left footed goalkeeper had been described as a player who possesses great reflexes, a composed presence in between the sticks.

“I’m looking to improve all aspects of my play, but particularly my left foot. I like the different drills, and my favourite is the crossbar challenge. I start off trying to hit the bar with my left foot from the penalty spot, then move five or ten yards further back, and then move back again. That helps me develop power and accuracy,” he told the club’s matchday programme.

Okonkwo has now fully recovered from an undisclosed ailment and he’s now back in contention to play a starring role with the Under-23 and the first team, if given the opportunity.

The Nigeria-eligible goalkeeper Arthur Okonkwo has recently been called up to train with Arsenal’s first team ahead of their opening 2020/2021 Premier League game against Fulham.

He was also among four players of Nigerian descent that had trained with the first team before the international break; the others being Tolaji Bola, James Olayinka and Daniel Oyegoke.

Both of Okonkwo’s parents grew up in Nigeria before immigrating to England for greener pasture. As a regular England youth international goalkeeper for their Under-16, Under-17 and Under-18, Okonkwo’s representatives have reportedly held talks with officials of the Nigeria Football Federation (NFF).

Arthur Okonkwo has just 12 months left on his current contract. His salary is reported to be above €68,000 per annum, which is about €1,200 per week.

He is signed with Adidas, and considering Arsenal’s lack of strong competition to Bernd Leno despite the latest signing of Runar Alex Runarsson from Dijon, the presence and tutelage of highly rated Goalkeeper Coach Inaki Cana could finally be the what Okonkwo needs to unlock his maximum potential.

Scout Report: Joel Ideho
What will Hakim Ziyech bring to Chelsea?
To Top