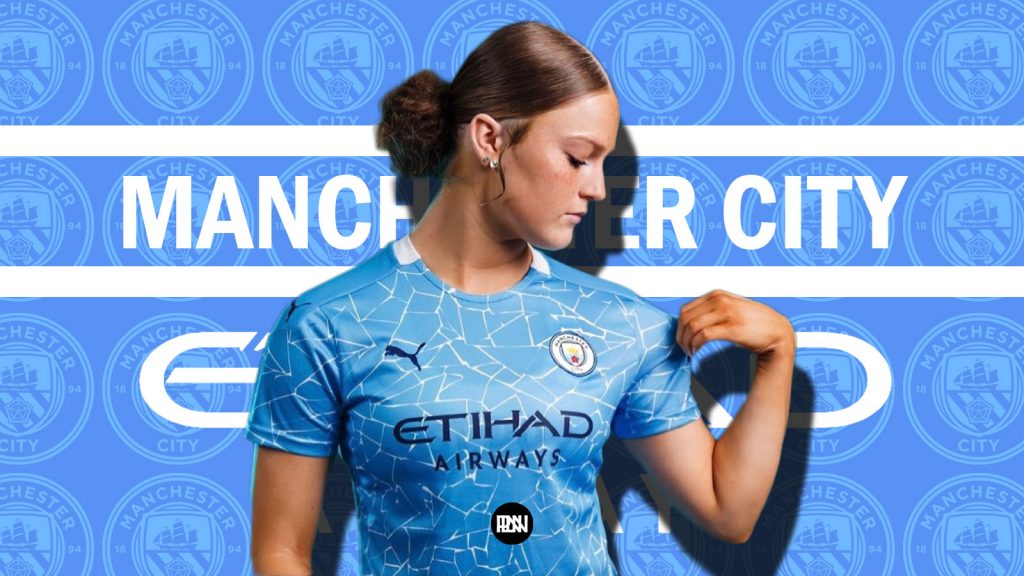 Ruby Mace has been a regular figure on the Manchester City Women’s team bench this season, and despite the Citizens having an injury crisis that hit their defensive segment of the club significantly hard (with Steph Houghton, Alex Greenwood, Ellie Roebuck, Karen Bardsley, and Esme Morgan all being injured in the defensive department), Ruby Mace still hasn’t made her WSL debut for the club and has only played 1 match, which was in the FA WSL Cup. So, who is Manchester City defender Ruby Mace?

Born on September 5th, 2003, Ruby Mace has only just turned 18 years old. She plays as a defender for the Sky Blues and has already been capped at the Under-17 level for the Lionesses national team. The former Arsenal player has been at Man City since joining this summer but as mentioned before, hasn’t received many opportunities to prove herself.

Ruby was raised in Essex and is the youngest in her family. Mace attended Coopers’ Company and Coborn School, which former teammate Alex Hennessy also attended. At age 14, she switched to Woodlands in Basildon and joined an elite development programme. The England Football Association nominated Mace to receive Sports Aid funding (which Hennessy also received), and she received £1,000 for football-related costs.

Mace made her professional debut at 17 years old when she appeared off the bench against North London rivals Spurs in the 88th minute of the FA Cup tie. She made her WSL debut just shy of a month later. She left the Gunners at the end of last season, with many stating a lack of game time as the reason why.

WHAT ARE HER SPECIALTIES?

Ruby Mace is a talented defender who isn’t scared to progress up the pitch if necessary, but usually attempts to pass her way out of trouble. Capable of playing in central midfield as well, Ruby is a versatile player who is good at everything she commits to.

In a BBC Sport interview, Manchester City manager Gareth Taylor said, “She’s been great in the way she’s settled in, and it’s helped that she’s had some really great role models around her – particularly in pre-season with Alex Greenwood, She’s learning so much. She is a player we believe will do really well for us in the future. I think she’s capable of playing in various positions, but we are concentrating on her as a centre-back. It’s important [that young players] get consistency in a position where we see her showing her best capabilities.”

That quote saw him talk about her friendship with Alex Greenwood, who she is likely to feature beside if she plays. However, the problem with that is with the likes of Demi Stokes, Alex Greenwood, Steph Houghton, Abby Dahlkemper and even Jill Scott featuring ahead of her at centre back, which has made her only feature once and be a regular on the City bench. This could be because she needs to get used to the City system, or because Man City sees her stepping into the team in the future, rather than now.

WHAT’S NEXT FOR RUBY?

As many have speculated, Ruby Mace could move to Aston Villa due to former manager Carla Ward working for the Villans. The pair worked together during Mace’s loan to Birmingham City last season, where she made 11 appearances and scored 2 goals to help them stay up. This would be good for Manchester City (as they currently aren’t utilising her), Aston Villa (as their defence has been shambolic so far), and Ruby Mace (who should want more game time).

However, Ruby Mace could benefit with a season in the Championship, as she would receive a lot of game time, and play almost every match. I think as Mace is WSL quality, she should go to a team that is, such as Liverpool. The Reds are 2-time WSL Champions and have been looking to bounce back into the WSL after relegation to the Championship 2 years ago. Playing for a team who are fighting for promotions could give Mace a winning drive, which Manchester City needs.