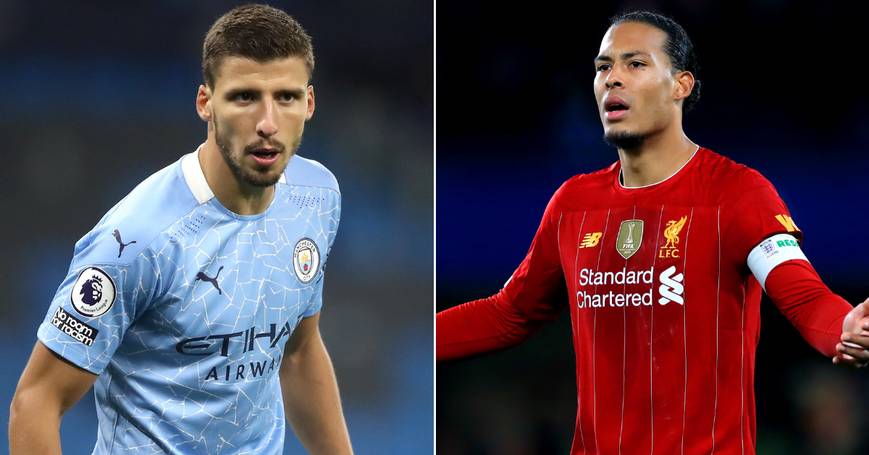 Ruben Dias was signed by Manchester City in late September for £65 million from Benefica. The Portuguese defender has shaped the backline of Pep Guardiola’s squad and has been the prime reason for their success at the summit.

Under his guidance at the defensive line, Man City have managed to keep a whopping 19 clean sheets in 28 games they have played overall competitions while conceding only 10 goals in the process. Pep Guardiola is extremely impressed with Dias’ performance and feels that his impact at City is similar to Van Dijk’s at Liverpool.

“Yes, absolutely,” Guardiola said when asked if his arrival can be compared to that of the Dutch defender at Anfield. “So far, how he’s settled immediately, in terms of mentality and he’s a guy who lives 24 hours for his profession.”

“Every step he does, at home, on or off the pitch, eating, sleeping, recovering time, preparation time, everything is to be perfect during this 95-minute football game. That’s why.”

“He’s not just a player who plays good, he’s a player who makes the other guys play good too,” the City boss added. “It’s 90 minutes talking, 90 minutes communicating, 90 minutes saying what they have to do in every single action. When that happens, it’s difficult for me and he’s undroppable.

“It’s quite similar like Eric [Garcia], Eric has this mentality to play 90 minutes talk, lead the other ones.

“Hopefully the other central defenders – John (Stones), Aymeric (Laporte), Nathan (Ake)- can learn and not just play for themselves and what they have to do, see what happens close to them. That’s why it’s a football game as a team, not just individuals.”

Now, let’s talk about why Ruben Dias impact has been greater than Van Dijk’s at Liverpool –

According to the reports, “City’s goals conceded per game have gone from 0.8 in the 25 games before Dias signed, to 0.4 in the 25 games since. Similarly, under Jurgen Klopp, Liverpool were conceding 1.2 goals per game before Van Dijk arrived – up until this season they were conceding 0.6 per game. They’ve both managed to plug the hole by half.”

While the goals per game have reduced similarly, the win percentage of City after Ruben Dias’ arrival has been far greater than that of Virgil Van Dijk.

Ruben Dias has played every minute in the Premier League since his move and has been indispensable since. The Portuguese international is difficult to be kept out of the team and has helped the team in a greater manner than just keeping clean sheets.

While Van Dijk helped Liverpool keep clean sheets with the fast reflexes and smart saves of Alisson Becker, Ruben Dias on the other hand has managed to bring the ethereal out of his partner John Stones which has strengthened the back of City.

John Stones has been more relaxed this season after the arrival of Dias and the duo have only conceded one goal in 12 matches that they have started together.

The injury-prone defender struggled for form and was on the verge of a move from City until Ruben Dias came as a good fortune. He is not the unconfident centre-back anymore and has worked immensely hard on developing his mentality, stability, composure and, commitment.

Dias has changed the environment of the dressing room and has proved to one and all why quality defenders are indisputable on the field and therefore indispensable to win titles.

What Arsenal will look like without Bernd Leno and David Luiz?
How can Joe Willock transform Newcastle’s midfield
To Top