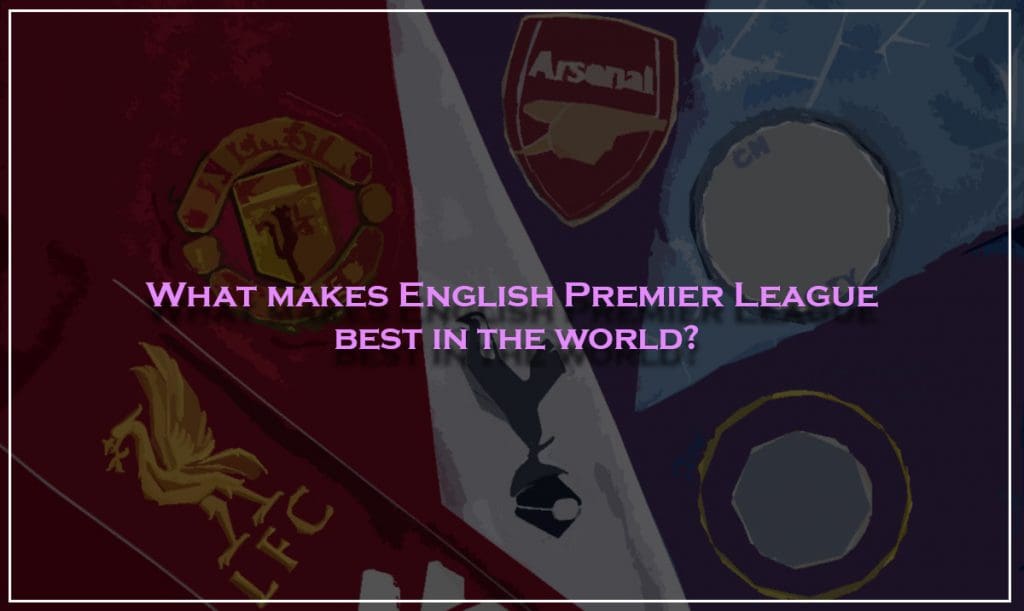 Many football fans consider the English Premier League (EPL) to be the world’s best football league.

You may be wondering if this is a fact or just a matter of opinion, as there are other great football leagues in Spain, Germany, and Italy.

You could say that one of the reasons people claim the EPL is the world’s greatest league is because it gets more TV coverage than the rest.

Let us explore some reasons why EPL is the best in the world.

What Makes The EPL Different From Others:

The truth is that EPL’s race for the title is what sets it apart from other leagues.

There are essentially two or three rival clubs in other leagues that compete for the trophy, but the EPL has six different teams who could become champions.

This adds a level of excitement that many do not find in other countries’ leagues, which is why it is common for Spanish and German fans to religiously follow the EPL and their own.

Since anything can happen season to season, and managers often make serious changes in the squad, you can expect anything to happen, making it exciting instead of monotonous.

One of the factors that blew everyone’s minds was Leicester City’s rise to the top when it was just a small-time club.

The EPL is extremely unpredictable, making it interesting for individuals from across the globe to tune in and follow the results.

The Players in The English Premier League

One of the common arguments people make when trying to argue against the EPL being the best is that two of the top players in the world play in Spain and Italy. These two players are the ones who consistently qualify for the Ballon d’or every single year, and their names are Cristiano Ronaldo and Lionel Messi. Well, for starters – CR7 is back at Manchester United; but there is more to it…

So how can the EPL be the world’s best if two of the most elite players play for different countries?

The answer is simple; football is a team game, not an individual sport.

If you do a tally of the top international players in the world, you’re going to find that it’s the EPL who has the majority. What this means is that if you’re a fan or spectator who watches the football matches on TV or live, then you get to see some of the world’s top talent every single week. This carries over very nicely to the overall team performance in the EPL and is one of the main factors that set it apart from other leagues.

You may be wondering how it’s possible to determine if the EPL has more talented players than other leagues, and it is a simple observation.

International tournaments like the Euro and World Cup pick some of the best players from their country. It became apparent that the EPL supplied 74 total players in such tournaments, compared to 48 players by Bundesliga and 32 by La Liga.

This means that of the total players in the tournaments, 20% came from the EPL, while others fell short.

This is true for all international tournaments, which clarifies that the English Premier League provides the top talented players of the world for all major competitions.

EPL boasts some of the best football stadiums in the world, with top-class seating and viewing options for many who do not need to travel long distances to watch a football match. The football fields are kept in prime shape, with professionals constantly monitoring the quality of grass and using chemicals to keep it in perfect condition.

The top clubs in the EPL have world-class grounds, such as Arsenal’s Emirates Stadium and Liverpool’s Anfield. Even the smaller football clubs have decent football stadiums, which says a lot about the quality of the EPL.

In 1965, when TV coverage was still in black and white, only a few viewers watched the weekly highlights of the football match.

40 years in the future, and now the EPL boasts an incredible amount of viewers, more than 600 million worldwide, from around 200 countries, which is incredible to think about.

The masses eagerly anticipate live matches, and the revenue generated from these broadcasts is distributed among the twenty clubs.

So the EPL is the most-watched football league globally, and the level of excitement felt by viewers is unmatched for any other of the world’s leagues.

Many individuals also find joy in betting for the sport, and experts agree that to have the highest chance of winning, you must stay informed when betting in the EPL.

Olivier Giroud: Return to the Les Blues and why he should be around the French setup more often
Newcastle United leading the race for Sven Botman
To Top