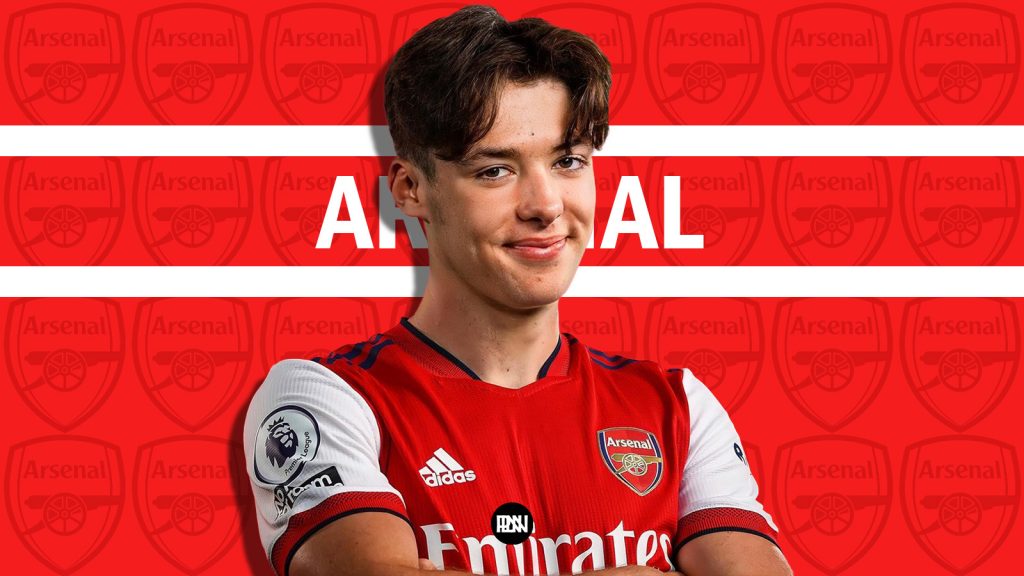 Arsenal are reportedly leading the race for Bologna full-back Aaron Hickey, according to various reports.

The Gunners are believed to be eager to bolster their defence this summer, having missed out on a top four spot to fierce rivals Tottenham Hotspur on the final day of the Premier League campaign.

Mikel Arteta and his staff have identified the left-back position as an area they could significantly improve, and the Scottish wonderkid appears to fit the bill.

Compatriot Kieran Tierney has produced some stunning displays for the club since arriving from Celtic – but has struggled to stay injury-free for prolonged periods.

While 2021 summer signing Nuno Tavares has failed to convince management that he has what it takes to become a capable stand-in for Tierney.

According to reports such as Football.London, Hickey is a “top target” for the Gunners this summer. But they are set to face fierce competition for the 19-year-old. West Ham have entered the race for Hickey’s signature, according to reports in Italy. While, Brentford and Newcastle United are reportedly also keen. German champions Bayern Munich were reportedly keen once before, but the former Hearts man remarkably turned them down in order to join Bologna in a £1.5m deal.

The move has rather turned out to be a successful one, with the full-back becoming a regular in Serie A, also earning his senior caps for Scotland earlier this year, and has been named in Steve Clarke’s latest squad for the Tartan Army’s crucial World Cup play-off campaign against Ukraine.

Below I will attempt to evaluate Aaron Hickey in-depth using The Eye Test and Underlying Stats to come to a conclusion about the potential effectiveness of this signing and if I believe the Scottish starlet could become a success in the Premier League.

*Note: This is based on my personal evaluation of the player. I will be drawing on extensive hindsight knowledge, in-game footage as well as YouTube highlight reels to evaluate Inácio in this section*

Operating as an attacking left-back or wing-back, the assuredness and composure with both feet is a striking attribute of the 19-year-old’s game.

Praised for his intelligence on the ball for his age within the Hearts set-up, alongside a maturity beyond his years, it was no surprise to see Hickey named in line-ups still as a teenager for The Jam Tarts.

He would go on to make his Hearts debut near the end of the 18-19 season in the Scottish Premier League, substituted on against Aberdeen. Afterwards, he would also feature in Hearts’ Scottish Cup Final against Celtic that same season, with Hearts narrowly losing out to the club Hickey had a stint with as a youth player.

The defender has made quite the splash in Italian football since his arrival though, a football culture that certainly takes to expansive wing-backs with open arms.

His versatility has also seen him feature centrally for Mihajlovic’s men, even featuring in a midfield berth against Juventus earlier this season – a testament to his tremendous qualities in possession and the assuredness and level-headedness he brings to the Bologna squad.

This ability to transition into more attacking areas, and also the ability to break opposition lines and drive his team up the pitch has drawn favourable comparisons to many top level full-backs, such as Bayern Munich’s Joshua Kimmich when he featured heavily there in his latter years, with the German maestro interchangeable between defence and midfield.

Such lofty comparisons simply aren’t made in a haste, this kid possesses that kind of versatility and panache to his game. However, his performances throughout Serie A this campaign has successfully highlighted how good he is going forward.

The Glasgow-born ace’s goal-scoring ability down the flanks has made him very useful to his current employers, and he is certainly not one for scoring a scrappy effort as you would associate with most defenders. A low piledriver against Genoa sticks out, alongside an effort finding its way in against Lazio despite Lazzari trying to match the Scotsman’s tenacity – a fierce strike eventually bundled in.

Also, his 20-yard scorching effort against Sassuolo in December is another that stands out.

His attacking style of play is also seen in Hickey’s constant aggression, a constant desire to chase after the ball and advance The Red and Blues further up the field. In moments of immense pressure on the ball, Bologna’s number 3 is aggressive in inserting himself into the battle but also calm in playing his fellow teammates into space.

Opponent’s pressure doesn’t faze him one bit, he is perfectly capable of evading it and progressing the ball to keep attacks flowing or to start them off.

Often, aggression and tenacity isn’t matched by a calmness on the ball but Hickey’s game is extremely well-rounded for a player just shy of his 20th birthday. A defensive steel to his game also demands he’s played as a full-back option, blocking balls into the box, halting attackers who look like they’ve got the drop on him and challenging to start a Bologna counter-attack.

His incredible strengths lie in retrieving the ball with a last-ditch challenge, before executing a new attack with skill. At times, he does indeed seem reckless with it, and it’s something he’ll have temper when moving over to English football, but the rate at which he wins the ball is something loved by his fans in Italy.

Nonetheless, his wonder-strike against Sassuolo stole the headlines, an arrowed shot leaving Gianluca Pegolo rooted to his spot, but Bologna’s clean sheet in a 3-0 win was indicative of Hickey’s impressive defensive work.

When faced up against on-rushing attackers, or when they’re entering the penalty area, he uses his frame and is incredibly alert standing up to them and not rushing into any rash tackles giving away needless penalties or free-kicks. He holds a tremendous propensity to make telling and timely last-ditch blocks, and tackles.

Hickey is indeed a very capable defender, an incredibly engaging and alert one, something that can’t be said for Arsenal’s current fit option in Nuno Tavares.

Serie A has certainly tested Hickey to his limits, coming up against forceful and combative footballers, but it’s an experience that he is responding to brilliantly well but more importantly one that is perfectly fine-tuning his game, both in the tactical and physical sense.

*All stats from FBref.com and compared to other full-backs in the Top 5 Men’s Big Leagues + European Competition, and in comparison to his Bologna teammates. Unless otherwise noted, all stats are based on per 90 minutes played*

First and foremost, it’s important to note that Hickey registered an impressive five goals and laying on another in 36 Serie A outings for Bologna, which means he will indeed be ranked amongst the best in goalscoring metrics amongst full-backs in Europe’s top five leagues.

These current metrics are amazing for a full-back and would be considered top numbers of strikers, again a testament to the incredible bravery and courage exerted in Hickey’s game. He has shown he is the ideal embodiment of a marauding attacking full-back.

However, in the creative sense, he ranks low through his solitary assist and if he indeed makes the move to the English top flight, that is something he’d need improvement in considering the increasing attacking demand of a modern-day full-back.

Though, within the Bologna setup, he is clearly amongst the most creative in the whole squad. He’s certainly amongst the top three creative defenders in the team. He ranks second amongst defenders in the squad for key passes (18), sixth for final third passes (37), second for passes into the penalty area (22) and second for crosses into the penalty area (9).

It’s vital to remember he is only 19 years of age, so with more refining, learning and development in his game, the assists will be shown for his efforts. The fact that he can find the back of the net, should be enough in itself.

His defensive metrics against passes and crosses make for more telling reading and highlighting how impressive he is when facing up against opponents. He ranks in the top 13% of full-backs for % of dribblers tackled (59.3%), and in the top 1% for number of times dribbled past (0.35) per 90 minutes suggesting that he is amongst the best when standing up against opposing wingers. Hickey also ranks in the top 13% for shots blocked per 90 highlighting his specialty in his last-ditch defending.

Amongst the Bologna squad, he’s again one of the best for his all-round defending. He’s the best ranked defender in the squad for successful pressures (110), best for blocks (66), second for tackles won (22) and third for tackles + interceptions (84). It’s easy to see why he is making giant strides in his development, especially at the tender age of 19.

Aaron Hickey is indeed a wonderfully gifted full-back, capable of becoming effective and influential both in the attacking and defensive phases of his game. Five goals for a full-back really is no mean feat, and any top outfit will look at that and think he’d be incredibly useful going forward.

Indeed he is, capable of bagging the extraordinary goal as evidenced by most of his goals for Bologna in Serie A, Hickey has shown he can slice and dice the best defences in the Italian top-flight, and that’s mightily impressive considering the defensive emphasis placed on teams in the division.

Certainly, one assist to his name and the low numbers he pulls up when creating chances could deter potential suitors, but that must be read in the context of the division he’s playing in and also his tender age. As stated previously, Hickey is only going to get better and that is a scary thought, especially after the way he’s been expressing himself all season.

The 19-year-old will need to pick his next club wisely, however, one who will provide him with the game-time his development needs with the World Cup around the corner, he will be looking for first team guarantees and that should be at the forefront of his decision. Maybe a team outside the Premier League top six could be perfect for his maturity and development, and West Ham and Brentford who are reportedly interested in his services could well present with the ideal environment to thrive, but to more importantly make mistakes and learn from them.

He shouldn’t rush into joining a big, high-pressured outfit like Arsenal could be next season, with Arteta under-pressure to deliver Champions League football and trophies. Those kind of moves will come in the future so joining a team with the capabilities to build and one which places emphasis on providing youth with opportunities in the first XI should be at the top of his thinking. But again, Mikel has shown his grace of working with talents and bringing out the better of them over time and developing them into some serious ballers.

Nonetheless, expect a bidding war for Hickey in the summer with the expansive wing-back one of the hottest talents in Europe today. 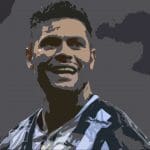 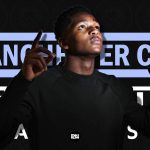