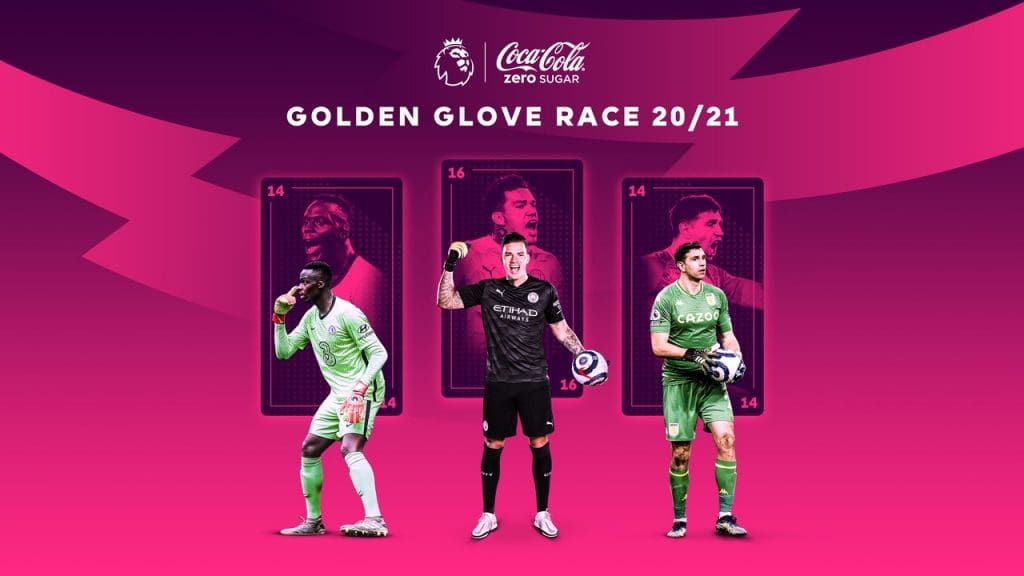 Last year’s winner, Ederson, is yet again the front-runner this term, as he has kept 16 clean sheets in 29 games for Manchester City. The Citizens have romped ahead of every other team this season due to their impressive defensive performances. Ederson is also the only goalkeeper this season who has been involved in a goal, as he provided a raking long-range assist to Ilkay Gundogan, who finished gloriously in the Citizen’s 3-0 win over Spurs in February.

However, more on the goalkeeping side of things, Ederson has been resilient and more often than not been a brick wall. Yet, it can be argued that City’s backline has played a huge role in this as the likes of Ruben Dias and John Stones have been impenetrable this season.

A facet in which Ederson has excelled this season has been his ability to save his side goals in 1v1 situations. The Brazilian is brilliant at making himself large, which eventually leads to players fumbling the ball or has resulted in Ederson saving the shot.

Moreover, Ederson has only conceded 12 goals from inside the penalty area which is about 4 to 5 goals lesser than the quality of chances conceded by Pep Guardiola’s side this season, because, according to Opta’s Expected Goals on Target metric (xGoT), Manchester City should have conceded about 16 to 17 goals from inside the box and while Ederson is not topping this statistic, he has saved almost whatever has come his way and deserves a lot of credit for it.

The 33 million pounds Manchester City spent on the ex-Benfica goalkeeper almost 5 years ago, has been one of the best investments in the Premier League and Ederson is coming up with the statistics and the subsequent awards to prove it as the Brazilian is surely the one to beat for the Golden Glove this season.

Last year’s relegation battlers, Aston Villa, have become one of the most frequent names in the top half of the table this season and a lot of it has been down to their heroic defensive performances. At the center of it, is Emiliano Martinez, who Aston Villa signed this summer for 20 million pounds from Arsenal, after the Argentinian’s impressive performances towards the end of the Premier League last season, as he also played a crucial part in Arsenal’s FA Cup victory last August.

Emi Martinez has been impeccable this season as he has kept 14 clean sheets in 28 starts and the numbers just keep piling up. Martinez’s save ratio has also been the best this season for goalkeepers who have made at-least 10 saves from inside the box with a save ratio of 69.7%, which is greater than both the other contenders in Ederson and Edouard Mendy.

However, the Argentinian’s most impressive statistic is the fact that he has made 99 saves already this season, which is the best for goalkeepers in the top half of the table, which tells you how big a role Martinez has played for getting Villa where they are right now.

While Arsenal may have thought they were the winners in the Emi Martinez deal last October, they would be kicking themselves right now, as he is a top contender for the Golden Glove this season which has resulted in Aston Villa currently being only a point away from Arsenal in the league with a game in hand.

If a year ago, you were to tell a Chelsea fan that their goalkeeper will be a contender for the Golden Glove next season, it would have been unimaginable and laughable. However, the signing of Edouard Mendy last summer coupled with Thomas Tuchel’s recent success at the back has made that aforementioned statement a quite possible one.

While Frank Lampard’s side was not all that easy to get through, Tuchel’s Chelsea has given Edouard Mendy little to nothing to save. Cesar Azpilicueta, Antonio Rudiger, Thiago Silva and Andreas Christensen have solidified that backline and have restricted Edouard Mendy to only 16 saves in nine outings under Thomas Tuchel i.e., less than 2 saves a game.

Mendy, under Thomas Tuchel, has already kept as many clean sheets as he did under Frank Lampard with 6 lesser appearances and given how Chelsea are currently playing, there would be no surprises if Edouard Mendy overtakes Ederson and fends off Emiliano Martinez to win the Golden Glove this season.