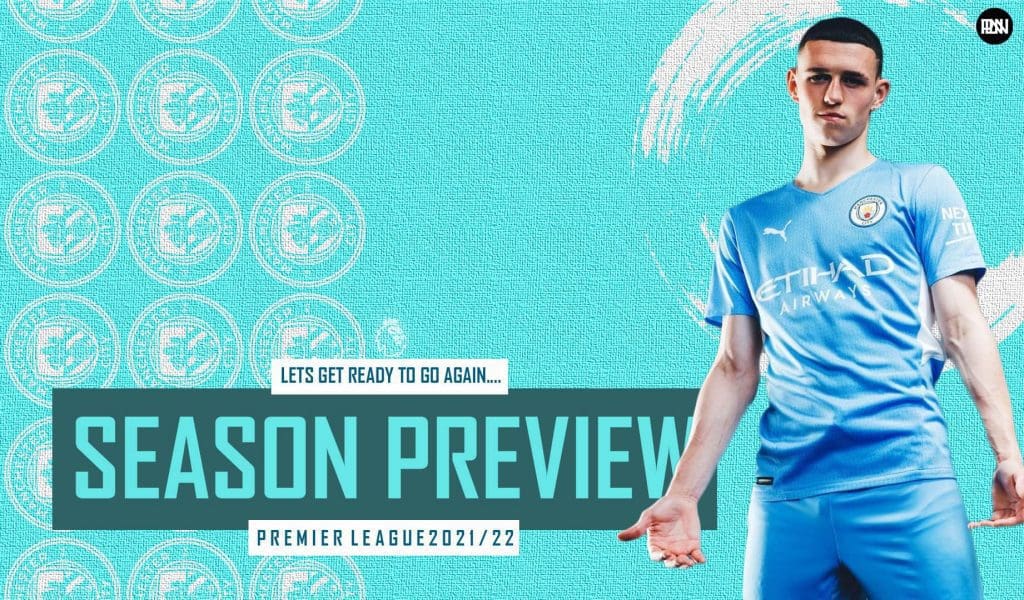 The Champions of England under Pep Guardiola were the team to beat last season! They conquered England with utmost dominance and will look to defend the title with much more intensity. Pep and his team in blue have quality written all over the pitch and the mentality of always evolving and developing has made them one of the best teams, not just in England, but all over Europe.

With the only scare of losing in the Champions League Final, the Blues of Manchester were nearly perfect in the culminated season and the desire of the club to be THE PERFECT ones always pushes them to make all dreams possible.

The appointment of Jack Grealish and a push to get the best English striker, Manchester City have portrayed their desire to get glory. With a rock-solid defence and a star-studded attacking line, Manchester City do have everything to win the league yet again.

Pep Guardiola will enter the season with one of the most stable squads while other teams will be searching for a balance in the squad. All the players in the team are very well aware of their roles and how they have to contribute to the team. This will definitely give them edge as they enter the new season.

Having already conquered England thrice in the last four seasons, many believe that this might be the year where Guardiola just aims for the club’s first-ever European Trophy. But with the Champions League being so uncertain, Pep will definitely love to defend the league which could be a much tougher task with the competition in the Premier League better than ever. With no team able to defend the Premier League title, other than City, in the last decade, can the Blues really do this again?

If City were to finish on the top of the podium, they will have to avoid injuries and will need to have a great balance considering their European ambitions. The squad depth could be key for any team this season as the Premier League turns back to normality. City do have great attacking back-ups but keeping their defenders fit will be a task for the medical team.

But if City go trophy-less this season, keeping in mind that this season will be much more competitive than the previous one, will this be the farewell to Guardiola? This might sound very surprising but the City board did appoint the Spanish manager for a European glory but the manager has not been able to serve the purpose and missing out on the league title as well might just be the end of the reign for the ‘Best Manager’ out there in the city of Manchester.

Although the team looks all well prepared for the new challenge, they just can not hide the fact that they still lack the No. 9 which many think is the most important position on the field. Despite being the highest-scoring team last season, City did miss out on the striker who can lead from the front. With Spurs’ board looking adamant on keeping Harry Kane and no other striker to fill in the boots, the responsibility of Gabriel Jesus or any other make-shift False 9 will increase more than ever. Every other Premier League has worked on defensive recruitments and thus the goals-galore just might not be that often anymore.

Also, with Eric Garcia already off the books, Laporte’s future being uncertain and Ake not performing to the expected levels, Manchester City will have a lot of pressure to keep John Stones and Ruben Dias match fit every week. A replica of what Liverpool have suffered recently due to injuries might lead to a deja-vu for the Premier League Champions.

With the competition expected to be closer than ever, any team aspiring to be title contenders should learn to be consistent. A wind always flows over the big teams that say that a black patch does occur for them in a season and this leads to a major downfall. This could very well happen with City despite of them having a very good start to the season.

During this phase, they face arch-rivals Manchester United, a well-drilled Everton team, and the two dark horses, Aston Villa and West Ham United. After not able to claim superiority in the Manchester Derbies recently, Pep will definitely love to get his team better this time. Also matches against Villa and West Ham just can not be under-estimated as the teams on their day would be better than any squad they face.

‘The Face of the Best League’ as he is known as, De-Bruyne undoubtedly will be the most valuable player for City despite the arrivals of other new stars. The Belgian’s absence is always felt despite the talent the team has. His wide range of passes and his vision has always made him shine brighter than everyone.

The arrivals of Jack Grealish and a star striker (possibly Kane), who too have been the MVPs of their respective clubs might just not be enough to take the thrown from De Bruyne. Rather their additions will allow De-Bruyne to be better than ever. The inclusion of Jack Grealish will give the Belgian more freedom to roam on the pitch and do what he does best and the inclusion of a poacher up top might help him break the PL record of most assists in a season.

Despite their intentions and will to go for the Champions League, it will be foolish to rule them out of the title contention in the Premier League! But will it be much difficult than the previous season? Definitely YES! The enforcements and improvements that every other rival team has made this season don’t make City the favorites this season but for sure One of the Favorites to clinch the English Football’s highest honor.