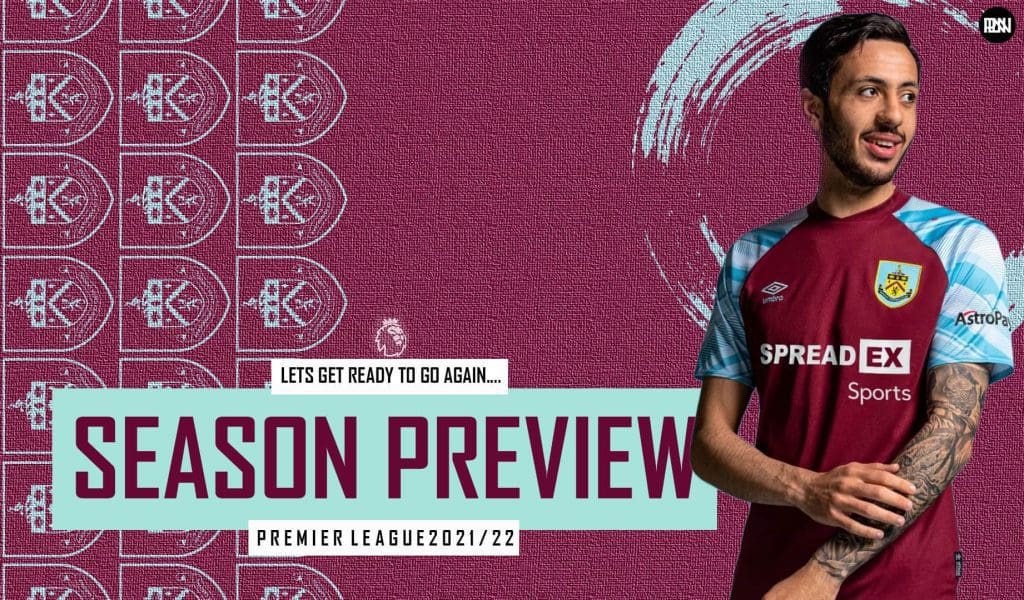 The 2021/22 Premier League season will be Burnley’s sixth consecutive season in the top-flight of English football. Burnley had their best season in 2017-18 when they finished in seventh place as the best of the rest outside the traditional ‘Big Six’. However, they were not able to achieve the same heights since then, and have gone backwards instead. They have finished in the bottom half of the league table in two out of three season since and it looks like it could be a while before they are back up into that position again.

Last season, even though Burnley finished 11 points outside the relegation zone, they had a torrid time in the opening games and could not find a rhythm to string together a good set of results. Their struggles from last season included a bad attack, injuries to key players and a lack of quality squad depth. They had just 4 wins out of 19 at home and were equally bad away from home with just 6 wins.

Burnley started the season with just two signings in the summer transfer window, which were Dale Stephens for £1 million and goalkeeper Will Norris on a free. Squad depth was one of the major contributors to the below par performances the club put in last season.

This time around, Burnley have made just two signings yet again, with goalkeeper Wayne Hennessey and defender Nathan Collins joining the squad. Collins is considered to be a highly rated youngster and he could be a smart buy for the Lancashire club, and playing in a defensive natured team could help him develop.

Manager Sean Dyche who is known to play the typical English style of football, with long balls and a very physical game will be hoping for a much better season than last time. Dyche will want some more signings, but with the first game of the season just around the corner, it looks unlikely he will get any more. There are concerns among Burnley fans that this season could end in relegation, but they will no doubt turn up in numbers to support the club they love. With fans being allowed back into the stadiums, a vociferous home support could well help the team improve on last season’s horror show at home.

For Burnley, the primary target every season is to get to the 40-point mark and avoid relegation. This season will be no different. With the other squads and teams better than ever, it is going to be one of the toughest seasons for the Lancashire club. Although they were not involved in a relegation battle last season, they still finished 17th.

There is a growing concern, and rightly so about the future of the club in the league. Every season, with the mastermind of Sean Dyche, Burnley have stayed away from relegation, but this season it looks more of a possibility than ever. The expectations going into the new season will be to survive and get results however possible. Burnley is working hard at transfers, but its slow-moving nature has understandably left many frustrated. If they can survive yet another season in the Premier League, it will no doubt be seen as a successful season by the Turf Moor faithful.

As mentioned before Burnley had one of the worst attacks in the league, only Sheffield United and Fulham had a worse attacking record in the league. They need to improve massively on the attacking front to stand any chance of getting out of the bottom five places. Burnley’s main issue is their attacking outlet and that has hampered their chances of going further up the table in the past as well. With talents like Dwight McNeil, who drew many a praise with his performances last season, there is hope among the Clarets’ supporters that the attack can improve.

Another area Burnley need to work on is their lack of quality on the bench. Quite often when games are at a deadlock, there is not enough quality on the bench for players to come on and influence the game. The manager has reportedly been frustrated with the lack of ambition the club has shown in the transfer market. The team needs a few impact subs urgently and if they do not move quick, they could lose out on their preferred targets.

Last season Burnley were very slow to get out the blocks and found themselves in the relegation zone after seven games. They could muster only 3 goals in 7 games as well, and if they do not hit the ground running, it could spell trouble for the Clarets. Burnley begin their Premier League campaign at home against Brighton and Hove Albion which is followed by a trip to Anfield to face Liverpool. They return to Turf Moor in Game week 3 for a clash against Leeds United and then go back to Merseyside to face Everton in the 4th game week.

The opening 8 games are very tough for Burnley, with games against Arsenal at home, Leicester away, Norwich at home and Manchester City away again rounding up the first 8 game weeks. It will no doubt be a tough task for Sean Dyche and his players to get all three points in any of the games, with all the other teams having the better squads.

However, Burnley will be hoping to capitalize on some opposition slip-ups while also maintaining their defensive composure. Any good result in these games will be a massive confidence booster for the team and will help them in gaining momentum for a tough season that lies ahead.

The captain of Burnley Football Club, and without a shadow of doubt their most important player. Ben Mee brings a calming sense to the backline and along with James Tarkowski has formed an excellent partnership. His absence was a major contributor to Burnley’s poor opening record from last season. Ben Mee has been at the club for 10 years now and has been a rock at the back for them. He can spot an opposition run well and he has been praised for his intelligence on the field.

Sean Dyche plays a defensive style of play, which has brought Ben Mee’s talents to the fore. Mee likes to play long balls which is a characteristic of the way Burnley play. Offensively he offers a lot as well and is a threat from set pieces. A brilliant player, it would not be a far throw to say the Ben Mee is one of Burnley’s best player alongside Nick Pope right now.

It looks difficult for Burnley to finish above the bottom five places. The Clarets could be in for a long season which could potentially involve a relegation battle that could go on till the end of the season. Newbies Brentford, Norwich City and Watford are determined to survive in the Premier League and have made investments to their squad to work towards achieving that goal. Burnley on the other hand have not been very active in the transfer market, and with less than a week to go until the first game of the season, it seems very difficult for the club.

They rely heavily on their defense, and a lack of depth could cost them a place in the league. They have escaped relegation on a few occasions before and the Clarets fans will be hoping that Sean Dyche can come up with yet another way to save the club from relegation. If important signings are made, Burnley could well achieve the 40 points with ease, but for now it looks like Burnley fans will have to settle for a place in the Championship next season.