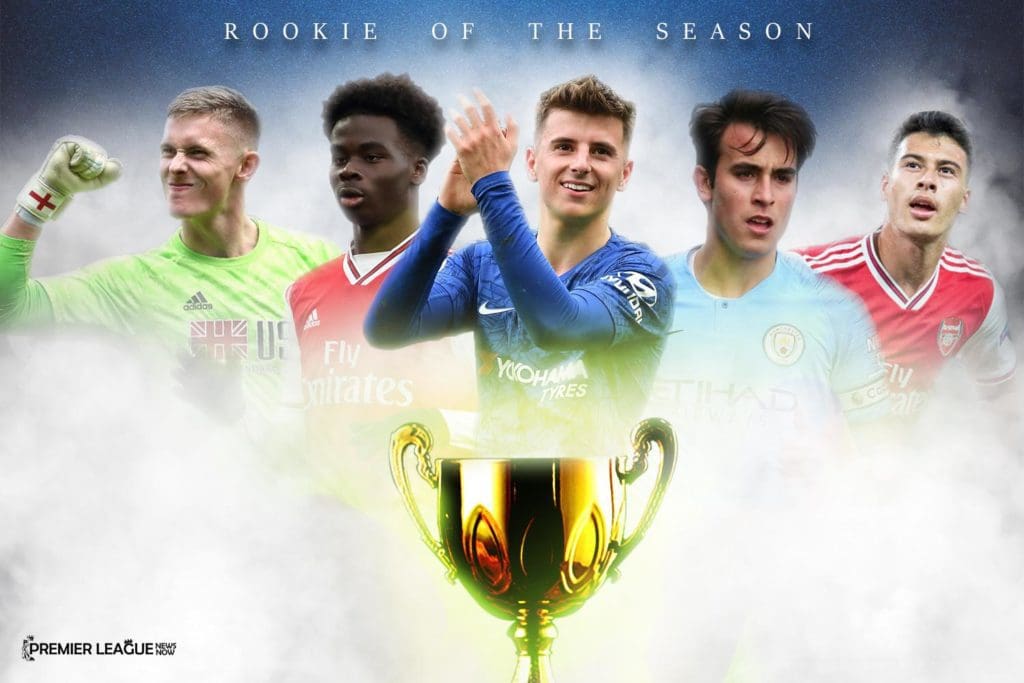 Did Bukayo Saka have a better season than Mason Mount? Or did Dean Henderson have the best season for a goalkeeper in his debut campaign?

That depends on what question you’re really asking. Which player was more valuable to their club? Which player had a better impact on and off the pitch? Which one of these players has a better future?

Although the Premier League does not have an award for the Rookie of the Year, we here at PremierLeagueNewsNow think it would be an interesting topic to debate on.

A rookie is an athlete who is playing in the top tier of any sport for the first time. So naturally young and established names like Trent Alexander-Arnold, Marcus Rashford, Raheem Sterling and Tammy Abraham will not fall in this category.

Here our picks for Rookie Of The Year:

One of the two eighteen year-old’s on our list is Bukayo Saka. He started his career with Arsenal’s infamous Hale End academy and burst on to scene in 2018 but it was the 2019-20 campaign in which revealed his true potential. A versatile player, Saka has played in numerous positions but mainly has played for the Gunners as a left-back after new signing Kieran Tierney was out owing to injury concerns.

Apart from his excellent short passing, Bukayo likes to take defenders and create chances for his forwards which is a key asset for full-backs playing under head coach Mikel Arteta.

When Arsenal announced they had signed a young 18 year-old from Ituano who play in third tier of Brazilian football, everyone was quiet excited to see Gabriel Martinelli. Martinelli has the ability to play in any of the forward positions. He is an excellent finisher along with work-rate to press from the front, making the opposition defenders commit mistakes and allowing his team to recover the ball back quickly.

Even though injuries may have not allowed Martinelli to complete his first season in the Premier League, in the limited amount of minutes he has played exceptional well. He has looked unflustered in the big matches.

After the League Cup game against Liverpool, manager Jürgen Klopp, labelled him ‘the talent of the century’.

After years and years of talent coming from Chelsea’s academy being loaned out or sold, this was the year were The Blues have given opportunities to their young stars.

One such prospect was Mason Mount. He played the first two years at loan to Vitesse and then Derby County before incoming new head coach and club legend Frank Lampard, decided it was time to allow the 21-year old to be a part of the first team.

And he has repaid the faith of the manager in 19-20 campaign. He was Chelsea’s most used player this season with 50 games played in all the competition. Mount’s versatility has allowed Lampard to use him in the central midfield, both sides of the attacking midfield and on the either sides of the forward lines.

The only defender in this list, Eric Garcia may have just burst on to the scene in the second half of this campaign but given the defensive issues for City this year due to John Stones’s poor displays and Otamendi not being trusted by Pep, he has stepped up in amazing fashion to partner up with Aymeric Laporte.

He is an academy graduate of the famous La Masia academy before moving to City in 2017. His was flawless in 4-0 thrashing of the newly crowned champions Liverpool.

Garcia excels in short passing and likes to take on opposition players if opportunity occurs. Certain elements of his game can be compared to Liverpool star Virgil Van Dijk but the young defender has long to go forward.

Next we head to Old Trafford where Mason Greenwood has had a terrific breakout season. Still just 18 year-old, the academy that has produced Class of 92 and great superstars like Sir Bobby Charlton and George Best, Mason has come through the ranks and prompted the boss Ole Gunnar Solskjaer to give the him a shot in the first team.

An out&out No.10 Greenwood has been an elite finisher during the course of the entire campaign. His hold-up is really good and being a two footed striker gives him a great advantage as striker. He has scored a ridiculous 17 goals in all competitions matching the likes of former United legends George Best, Brian Kidd and Wayne Rooney.

We round-off our list with another Manchester United Academy graduate Dean Henderson. Born in Whiteheaven, England he joined the Manchester United academy aged 14, having spent six years at Carlisle United . He hasn’t played a professional game for The Red Devils ever since but that possibility looks more likely to happen after the appalling displays of the current No.1 David de Gea have continued this year.

In 2018, he helped Championship side Sheffield United on loan from the parent club, get an automatic promotion spot in the Premier League. He was loaned back to The Blades were he been fantastic playing all the games barring the ones against parent club Manchester United. His reflex saves and ability to tackle with long-range efforts have applauded by fans and pundits alike.