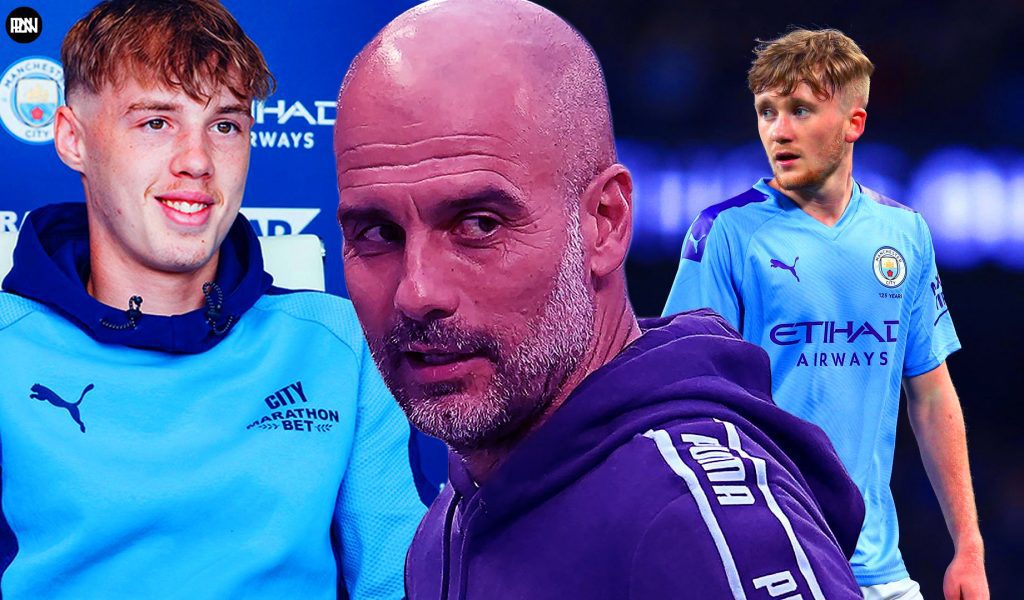 This season can be termed as officially over as the international tournaments are over. Players, after enjoying the summer break with their families will return to their respective clubs for the preseason duties.

Manchester City will look to get their squad ready for the upcoming season where they will look to retain their Premier League trophy. Preseason will give Pep Guardiola an insight on players, experimenting with the tactics and areas to improve. While the new academy graduates will get a chance to impress their manager. Here are 4 Manchester City players that everyone must keep their eyes on for this preseason.

First Player to be promoted from the EDS this season, Cole Palmer has impressed Pep Guardiola and his backroom staff already. Finishing last season as the 2nd top scorer in PL2, Cole Palmer will look to bring similar form when he goes into the preseason.

Naturally a central attacking midfielder, he has the ability to play on the right side of the front 3 as well. Pep Guardiola could use Palmer to give their star player Kevin De Bruyne an extended break. Much is expected from the youngster, and this is his chance to cement a place for himself in the City lineup. He is likely to start in a few games and make an appearance from the bench for the other games.

Pep Guardiola prefers 4-3-3 formation in which his midfielders are expected to play as advanced no. 8s, Cole Palmer suits this role because of his attacking mindset, and his ability to make late runs in the box to score goals could be useful when Manchester City faces any oppositions that prefer to sit back and absorb the attacks.

Technically blessed on his feet, Pep Guardiola likes such players and will hope that the youngster will be a reliable option for the coming season.

Tommy Doyle is the name that all the City fans are familiar with. The central midfielder from Eastlands is a lifelong Manchester City fan, and he has been around the first team since the last few seasons. Captain of the title-winning side in PL2, This could be Doyle’s chance to be a permanent name in the first team.

Manchester City are blessed with rich midfield talent, and Tommy Doyle is one of them. Preseason is where some of the first team players are given an extended break or protected from injuries. Likes of Ilkay Gundogan and Fernandinho will be given rest and Pep Guardiola will have to rely on Doyle to fill their spot.

A box-to-box midfielder, Tommy Doyle can also be used as a deep-lying playmaker for Pep Guardiola’s squad. He performed that role brilliantly in a cup match against Bournemouth and Pep Guardiola will expect him to show similar results. Tommy Doyle is the most ‘first-team ready’ player among the recent graduates.

This preseason will help Manchester City’s boss to come to a decision of whether to include him in his plans or loan him for first team minutes.

Much is expected from the young Belgian at Manchester City. Touted to be the successor of City captain Fernandinho, this is Lavia’s chance to show the people why he deserves to be promoted this early in his career.

Just at the age of 17, Pep Guardiola planned to promote Romeo Lavia to the first team. Fernandinho is likely to be rested for the preseason and Rodri has just returned from his national duties. The 17-year-old is likely to be played in the CDM role for few games of the preseason. A new face in the camp, Pep Guardiola will be expecting the Belgian to perform at his best.

Romeo Lavia brings the quality with him, his physical attributes and ability to break the opposition’s play would be the key to his performance when he goes into the preseason. Former Anderlecht man can play in a single pivot midfield, a quality Pep Guardiola’s system demands in a defensive midfielder.

This preseason is Romeo Lavia’s chance to earn himself a chance to play more minutes in first team and his performance will have a big impact on City’s transfer market plans.

City enters the preseason with only one recognized striker in the first team. Gabriel Jesus is likely to have more days off because of his national duties. Pep Guardiola will have to rely on Liam Delap to lead the attack for his team.

Already a favorite among City fans, Liam Delap is expected to enjoy more first-team minutes whether if City fails to replace Aguero with a big name. Manchester City has lacked a target man since Pep Guardiola arrived at the Etihad. Liam Delap is a tailor-made player to fill in for the abilities current attackers at Manchester City miss.

Blessed with bursting pace, Delap is the excellent header of the ball. Manchester City’s fullbacks along with Kevin De Bruyne love to deliver crosses in the box, and Liam Delap is the perfect player to convert those crosses into goals. Already played for the first team, Delap scored his 1st and only goal for Manchester City in a cup match against AFC Bournemouth. He fairly impressed everyone at City as he finished the season as a top scorer in PL2. His performances will be key to Manchester City’s decision of signing a striker for the upcoming season.

While Manchester City are on the lookout for a striker like Erling Haaland, they should atleast give a season to Liam Delap; who is their own version of Haaland.

MUST READ: Should Manchester City put their faith in Liam Delap?

Manchester City signed Nathan Ake to increase their depth in defensive roles. After ending last season on a bad terms due to his injuries, Nathan Ake seems fit to finally announce himself at the Etihad.

Premier League fans are no stranger to Nathan Ake’s performance, and everyone knows how talented the Dutch defender is. Naturally, a left-sided centre-back, Nathan Ake could also play as a left-back; an area that has concerned Pep Guardiola since 2017. It is difficult for Ake to play ahead of the likes of Laporte, Stones, and Dias in the centre back role, he could pretty much impress Pep Guardiola if given chance at the left-back.

City were linked to some left-backs recently and Nathan Ake’s performances could make Pep Guardiola change his mind. Nathan Ake could also play as a defensive midfielder and if Pep Guardiola decided to switch the team’s shape to 4-2-3-1 like he did few times last season, Ake can prove to be a dependable option due to his mobility. Nathan Ake deserves to play more minutes in the first team and this preseason is the time Guardiola must use him to the fullest.

Pep Guardiola must capitalize on Ake’s versatility for the coming season and the current preseason is Ake’s chance to prove the doubters wrong.