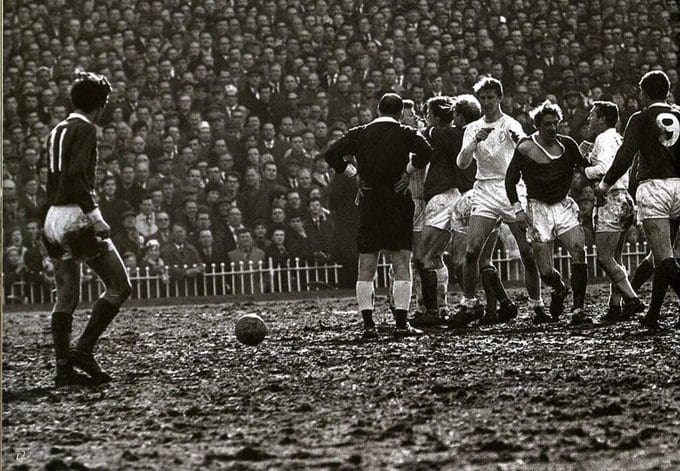 Sir Alex Ferguson wrote in his book about the hostile environment his United side face whenever they traveled to Elland Road, and once such fixture even saw a Leeds fan assault the then youth coach Eric Harrison on the touchline! However, even though the fans have a frosty relation, it has not soured relations between the two clubs, with several players moving across the two clubs to find success.

With Daniel James becoming the latest player to move between the two clubs, here we take a look at some of the best players over the years to exchange clubs:

Perhaps the most iconic name in the entire history of football, and definitely the most enigmatic name on this list, Eric ‘The King’ Cantona was one of the most famous and controversial players of all time. He was the most influential player of his time, and his teammates at Leeds and even Manchester United were in thrall of him.

Cantona joined Manchester United from Leeds United in 1992 after the Frenchman put in a transfer request at Leeds after being dropped from the matchday squad by then manager Howard Wilkinson. Before falling out with the coach, Eric Cantona was the most crucial and vital player in Leeds United’s 1991-92 title win. However, he was always a controversial figure and it came as no surprise to anyone when he burned his bridges at the Yorkshire club and set his heart on a move away from the club.

Upturned Sir Alex Ferguson, ever the sly and wily fox, and through connections with Wilkinson and his old charm, managed to lure Cantona to Old Trafford in a £1.2 million move, that was applauded by Leeds pundits for getting a tendentious player off the books but also met with anger by Leeds fans. However, it proved to be a masterstroke by Ferguson, as Cantona became one of the best players in the world, bringing 4 league titles, 2 FA Cups, and 3 Charity Shields at Old Trafford in his 5 seasons there. One of the most beloved players at Old Trafford, he was equally hated at Elland Road at that time, and still remains the best player to cross the Pennines.

One of the most decorated players on this list, Rio Ferdinand played for Leeds United from November 2000 to July 2002. He joined the Yorkshire club from West Ham United for a then-record fee of £18 million, making him the world’s most expensive defender at the time. Heavily tipped to be one of the best defenders in the world, there was a huge buzz about Ferdinand’s arrival at Leeds United.

His start was not the greatest one, but he gradually settled in and playing a crucial part in their UCL semi-final run in 2001. He eventually became the club captain next season, taking over from Lucas Radebe, and looked to set to go down as one of the many legends to play at Elland Road. However, in 2002, the club went through a financial crisis, forcing them to sell some of its star players. This included Rio, who became the world’s most expensive defender for a second time as Leeds United accepted a £30 million bid from Manchester United.

This move worked wonders and Rio settled in at Old Trafford in a United team that was going through somewhat of a rebuilding phase. He became the backbone of the team and a senior player as talents like Cristiano Ronaldo and Wayne Rooney arrived in the team and United set their sights on winning titles again.

He was partnered alongside Nemanja Vidic after the Serbian arrived in 2005 and those two formed an unbreakable partnership at the back, which is hailed by many as one of the best defensive partnerships of all time. Rio captained Manchester United alongside other greats like Ryan Giggs and Gary Neville in what was United’s most successful periods and left Old Trafford in 2014 after winning six Premier League titles, four Community Shields, two League Cups, one Champions League title, and one FIFA Club World Cup.

Once beloved by Sir Alex Ferguson when the pair worked together at Aberdeen, the pair had a falling out when they worked together at Manchester United. They were a successful pairing in Scotland, and dominated the 1980’s together, but did not have the same chemistry at Old Trafford, and this led Sir Alex to leave him out of the team which affected Strachan’s form and eventually led him to being put on the market.

Howard Wilkinson, then manager of Leeds United, set his sights on Strachan, and signed the Scot, making him the highest earner at the club in the process. The midfielder repaid the faith shown in him by the manager and the Elland Road faithful, helping the club win the Second Division title in 1989-90 season, in just his first year at the club. He was awarded the club captaincy on signing with the club, and he quickly became a beloved figure among Leeds supporters.

On winning the Second Division title and gaining promotion to the First Division, he was voted the Footballer of the Year for the 1990-91 season, as he led the Whites to a fourth-place finish in the league. The following season, in 1991-92, he led the team to the First Division title and earned an OBE for his services to the sport. Still a very popular and loved figure, his name is still sung at Elland Road.

A part of the famous Sir Matt Busby’s team, Johnny Giles was handed his debut after the devastating Munich Air disaster, in which eight of Man United’s first-team players died. Giles was playing for United’s youth teams before the crash, after being spotted by scouts in Ireland. The young Irishman was then called up to the first-team after that heart-rendering disaster, and he went on to play for Sir Matt for six seasons, making 99 appearances from the midfield, alongside the great Sir Bobby Charlton and  Denis Law. He won just one FA Cup in his time at Manchester United.

However, after being effectively frozen out of the squad by Sir Matt, Giles was furious and demanded a transfer. Johnny Giles joined Leeds United and famously told his wife that he was going to haunt his former manager. He arrived at Leeds in the 1963-64 season, with revenge on his mind, and worked hard to become one of the best midfielders in the country. He helped Leeds United to a Second Division title win in his very first season there, as he formed a partnership with one of the greatest Leeds United legends of all times in Billy Bremner.

The two of them became complimentary towards each other and worked together successfully to take Leeds to new heights. Giles became a prolific goal-scorer from his midfield position, scoring 115 goals for the Yorkshire team in his 12 seasons at the club. The Irishman won two First Division league titles, one FA Cup, one League Cup, and one European Cup with Leeds United before departing from the club in 1975, and cementing his place as an outright legend of the club.

His hatred for Man United and Matt Busby at the time, endeared him to Leeds supporters straightaway, and under legendary manager Don Revie, he led the team to become one of the best teams in football in the 1960s and 70s.

McQueen played for Leeds United for six seasons, from 1972 to 1978, and left Leeds after making 140 appearances. Spotted by Leeds scouts when he was playing for Scottish club St. Mirren, he joined the club at the behest of manager Don Revie who was rebuilding his team following the retirement of one of the best players in the club’s history, Jack Charlton. Revie saw McQueen as a long-term replacement for Charlton and was burdened with that at the young age of 20.

However, the blonde defender was successful with the club, winning the First Division title in the 1973-74 season, and became their first-choice center-back. Following the departure of manager Don Revie, McQueen also left the club shortly after and joined rivals Man United in what was a very controversial moment at that time. Gordon McQueen famously said in an interview, “99% of players want to play for Man United and the others are liars”. This statement enraged Leeds fans, as the Scot had stated a month ago that he wanted to play for Leeds for the rest of his career, and this statement was seen as a betrayal by Leeds supporters.

The defender joined Man United for a fee of £500,000, and spent seven years at the club, winning an FA Cup and a Charity Shield. He was known for his fearless defending and for popping up with goals at a crucial time, with the most famous of them being the 1979 FA Cup final goal against Arsenal.