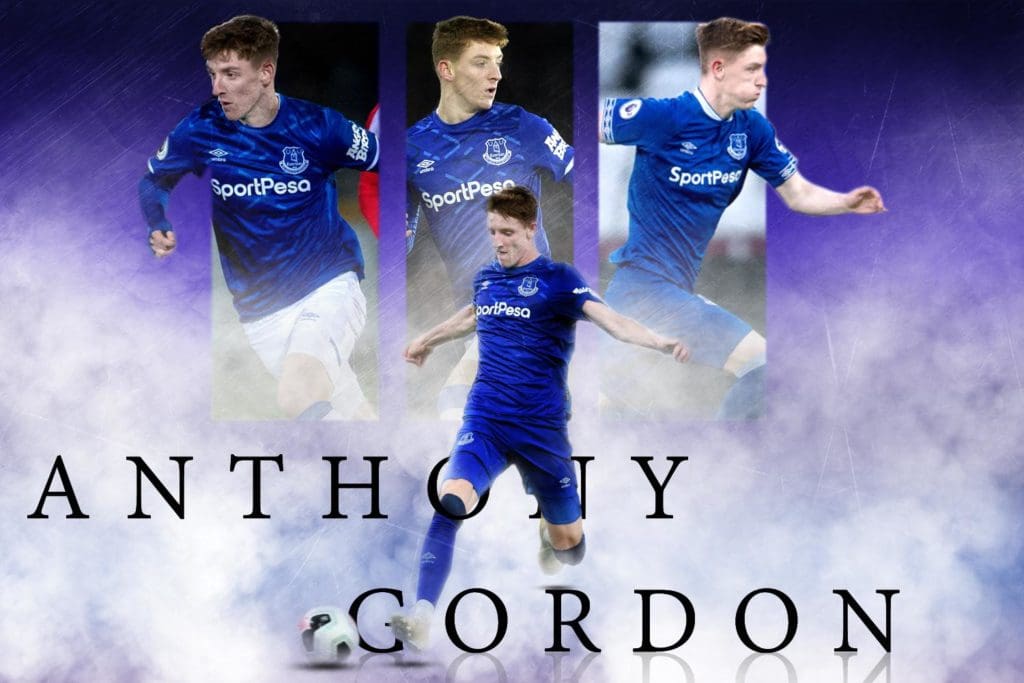 Anthony Gordon is a Liverpool born youngster who joined Everton at the age of eleven, after he was scouted while playing for his local club side South Liverpool and Whiston juniors.

Gordon rose through the Toffees’ academy ranks and being promoted to the Under-23s during the 2018/2019 season where he helped David Unsworth’s side with 8 goals and 4 assists in 27 appearances.

Gordon struggled to command a starting berth in the Under-23s last season but did enough to impress the club and was rewarded with a professional deal, signing a new four-year contract in March 2019 amid reported interests from Borussia Dortmund and Bayern Munich.

With conversations being held with the Toffees’ director of football Marcel Brands conjoined with Everton’s culture of giving opportunities to academy graduates convinced the youngster to commit his future to the Merseyside.

His contract deal followed immediately with a wonderful performance with the Under-23 side, scoring 8 goals in 10 matches before Christmas, which enhanced his opportunity into the first-team before Marco Silva was sacked.

Coming on as an 88th minutes substitute in Everton’s 3-0 Europa League group stage win over Apollon Limassol, Gordon made his first team debut and became the 6th youngest player to play for Everton’s first team when at the age of 16 years 286 days, in December 2017.

Duncan Ferguson, who was still the caretaker before the appointment of Ancelotti, handed Gordon his first appearance at Goodison Park in December 2019, during Carabao Cup quarter-final loss to Leicester.

Embed from Getty Images
In an interview with The Times, Carlo Ancelotti spoke about the talented 19-year-old player: “Anthony is a player with a lot of talent. It is not difficult to trust a young player when the player has quality and ability. Of course, the fact that he is so young means he has to improve but that is absolutely normal. But he has all the quality to play in the first team. In the last games we have until the end [of the season], he will have possibilities to play again.”

“First of all, he has a lot of technical skills. He can combine this with a good physical condition and resistance and so I think he has no problem to play as a midfielder. I put him, when he started to train with us, on the left side.

“He did really well, but I also think he can play as a No 10. In the final third, he has a lot of ability. I have patience. All the players who come from the academy are really important for us. The more players you have from the academy, the more possibility you have to have success.

“The experience I had in [AC] Milan when I was a player — it was a fantastic team and it was built on the players of the academy. It is true that after [Ruud] Gullit arrived, [Marco] Van Basten and [Frank] Rijkaard [we did well], but in the beginning [Franco] Baresi and [Paolo] Maldini were all players from the academy, and these players have a sense of belonging which is different to the others”.

Gordon has enjoyed regular appearances on the bench this season, featuring as a substitute thrice, playing a total of 64 minutes in two Premier League matches and one League Cup game, both on the left side of midfield.

With Carlo Ancelloti’s managerial experience and records of developing young talents, Gordon will undoubtedly have a lot to learn from the iconic manager and hopefully make more impact in the first team next season.