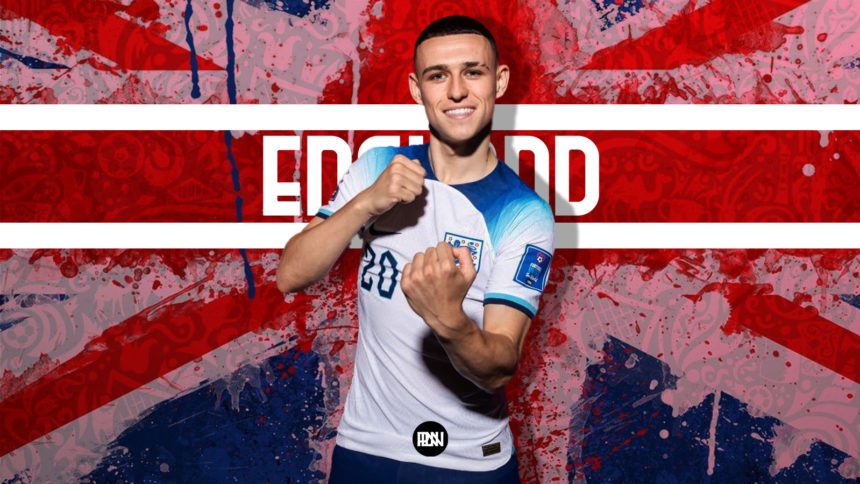 Following on from England’s disappointing performance in their 0-0 draw with USA in their second group stage fixture at World Cup, much of the uproar and public unrest surrounding Gareth Southgate’s crop of stars centred around the abilities of Manchester City‘s Phil Foden, and how his non-selection in the XI is hurting England’s chances of success.

Gareth Southgate gave a rather strange reasoning for not starting him, stating that he doesn’t play centrally for his club. Foden’s midfield competitor Mason Mount has long been a favourite of Southgate and a regular in the team not only because of his qualities in the final third, but for his hard work and application which seems fair.

However, not utilising Foden’s qualities has seen Southgate become the subject of much criticism. The England manager has somewhat become an unfortunate victim of the dearth of quality at his disposal. Damned if he doesn’t, damned if he does.

If Mount struggles to impress, Southgate’s decisions arrives with public scrutiny and criticism in which many fans and pundits alike suggest starting Foden instead. But what if Foden is provided with the opportunity, and fails to pull up trees too? What will become of the argument then? Unfortunately, much of Foden’s form for his country over the past year hasn’t been up to his usual club standard. Whether that’s to do with Southgate’s conservative and pragmatic, or the 22-year-old shirking under the weight of the England shirt is a debate still up in the air .

No doubt about it, Foden is arguably England’s biggest and most unique footballing talent. His club manager Guardiola thought as much when he emerged on the scene as a 16-year-old, describing the boy as a “gift” blessed with such a prestigious talent which, if nurtured and coached properly, could excel for club and country. Foden possesses the qualities, the character and temperament to match.

Things haven’t looked as plain sailing when he puts on an England shirt. Making his first start at the World Cup against Wales, with Southgate responding to fan and pundit complaints after the USA performance. It looked to be the same old story for both player and manager after England’s struggles in the first half.

The Manchester City midfielder yet again becoming the victim of his own versatility, shunted out wide on the right with his abilities struggling to come to the fore when the Three Lions needed it most. He was on the periphery, not just in terms of his position, hugging the right touchline, but in terms of his influence, minimal at best. His first World Cup start, deriving from much clamour and unrest, appeared to have passed him by.

However, a first-half showing doesn’t tell the whole story. You can’t see the full picture of a particular player based on 45 minutes alone, especially with Foden growing into proceedings before the break. Southgate knew as much and decided to change tact completely.

The second-half saw Foden and the rejuvenated Rashford switch wings, and it was a decision which proved a masterstroke.

With Southgate adding more width in England’s play, it provided the players with more space to operate in, and stretched the Welsh back-line and midfield which meant the Three Lions could be seen at their fluent best, picking up dangerous pockets and cutting through the resistance with relative ease. Foden looked like the star we’d seen for Manchester City. Driving inside from the left-flank into the half-space, pulling his markers apart with some dazzling close control, deceptive movement and deftness of mind which Wales couldn’t live with.

The second-half saw Foden provide his country with the penetration, imagination and creativity that seemed lost against USA. 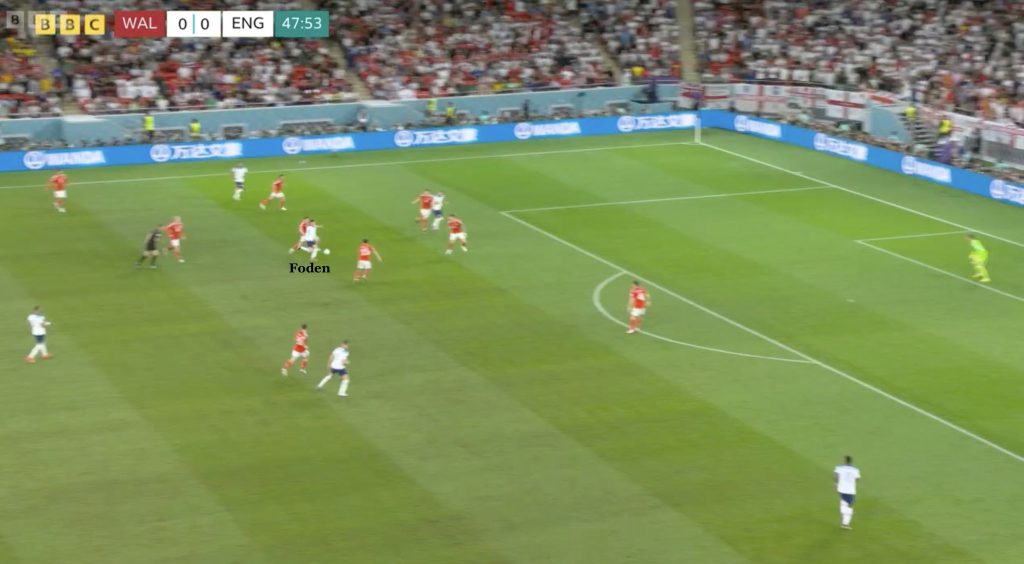 It was his driving run which led to Rashford’s opener from a free-kick. When the 22-year-old performs such actions, he immediately engages his opponents leaving space for others to exploit. Furthermore, Foden arguably is the best in Southgate’s team – along with James Maddison – in operating in tight spaces or when faced with pressure as seen above. It’s his carry that brings panic from the Welsh which the only option for Joe Rodon was to hack him illegally.

It is an element of Foden’s game which England must make the best use of for the future, from out wide on the left with the focus of coming in-field or from a no.8 position in midfield. No other player others such penetration and mesmerising skill as Foden does. For much of his England career, the Stockport-born star has again been a victim of his own versatility. His unique qualities in possession and on the ball means he can operate in various positions in attack. But it’s safe to assume that Southgate now knows where to utilize his most prodigious weapon.

Barely a minute later from his marauding run, he was found at the right place at the right time sweeping in a tap-in formed from Harry Kane’s sumptuous pass across the penalty area.

What a night! Absolutely buzzin’ to score my first goal in the World Cup! ⚽️ Come on England! 🦁🏴󠁧󠁢󠁥󠁮󠁧󠁿 pic.twitter.com/3rYoSXzHOr

Forecast for the immediate future

Not only does his playing out wide on the left or as a no.8 bring penetrating runs and creativity in the final third, but it crucially breeds goals, and that’s shown through eight of them for Manchester City so far this campaign. The 22-year-old exemplifies completeness and world-class decisiveness in the final third if he is placed in the right positions. The clamour for his selection against Wales is purely justified.

The next thing for Southgate now is, whether he’s brave enough to base his selection for the last-16 tie against Senegal on Sunday on meritocracy rather than loyalty. Not only did Rashford deserve a stake for selection, but Foden too. However, history proves that Southgate has always sided with his tried and trusted in Mason Mount and Raheem Sterling. Bukayo Saka will have much to say too, he’s consistently showcased his class for Southgate when called upon.

So we’re all in agreement, Phil Foden starts for England for the remainder of the World Cup?

While both players have always come up trumps for England, their spots are under serious threat and their forms in the lead-up to the competition suggests they shouldn’t be in the XI. Both Mount and Sterling have just five goals between them in the Premier League, while Rashford and Foden entered the tournament in fine form for their clubs, scoring 11 league goals between them.

Furthermore, Mount and Sterling failed to impress when handed the opportunity against the US. Rashford and Foden took theirs against Wales in a resounding win, so why change a winning team? That will be the question placed before the England manager in the lead-up to Sunday’s difficult encounter with the champions of Africa.

Where Southgate deploys Foden is another conversation entirely. A headache which he will need to handle with care, despite possessing arguably one of the finest attacking weapons in the whole competition.

There is a strong urge to argue that Foden should be deployed centrally for immediate future, but, as Southgate said in the build-up to the Wales game, it’s easier to argue such from the outside looking in. “Sometimes the discussion around just plopping him in as 10 in every game isn’t realistic,” the manager said, “because first you need the ball and second there are defensive responsibilities (in that role) that he isn’t given at his club.

“From the wide area, it’s different. The responsibility is different and the role is different. At 10 you have to cover a lot more ground and be aware of the spaces with the ball. If that bit of pressure isn’t right, then they are through you and into your back line. That is why we didn’t put him in as a 10 against the U.S. There are games where (…) there might be a little more freedom and that might be the slot he can go to and express himself, but his club don’t do that either, so there must be a reason for it.”

Guardiola himself said in the past that he sees Foden’s long-term future in the ‘free-8’ where City legend and icon David Silva used to operate, but that comes with huge responsibilities, more maturity, development and adapting to the physical demands the role brings. Can he fulfil such roles like a Bernardo Silva or a Kevin De Bruyne can? Certainly not now. The same can be said when comparing him to his England teammate Jude Bellingham who possesses an engine and endeavour that is simply unbridled. Foden just doesn’t have that aura, YET.

So the prospect of seeing him start centrally against Senegal seems near-impossible. Even Mount still looks the preferred option in that role, but we’ll cross the central role bridge when we get to it.

For now, the Wales showing will hand Foden much confidence moving forward, and he will be hoping it’s enough to stake a claim for a starting berth on Sunday. 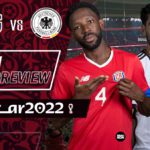 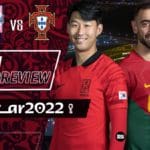