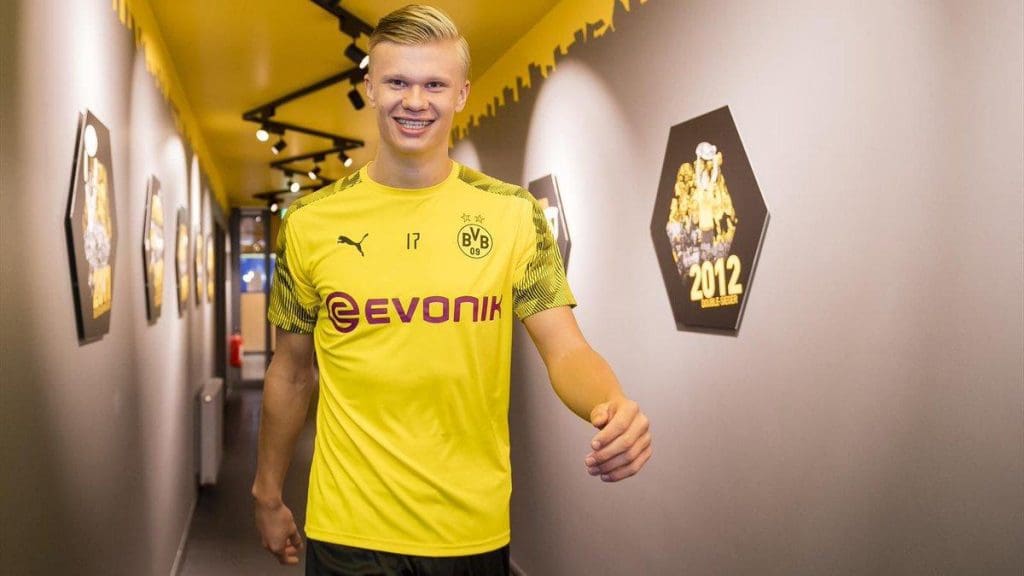 Manchester City drew Borussia Dortmund in the Champions League quarter-finals draw and all the talk surrounding the matchup is seeing Erling Haaland against one of the teams he has been linked to the most throughout this season.

Erling Haaland is one of the best in-form strikers at the moment and has been scoring goals for fun this season. He has been praised by teammates, pundits, various managers, opponents, and almost everyone has recognized the Norwegian striker as one of the players to take up the mantle after Messi and Ronaldo. This has led to Haaland being linked to some of Europe’s top teams, with Manchester City, Manchester United, Real Madrid, Barcelona, Liverpool, Juventus, Bayern Munich all after the young striker.

However, the 20-year-old has been strongly linked to the Blue half of Manchester and has been tipped to play for legendary manager Pep Guardiola next season. Pep, who has been silent on the links for most of this season, spoke about the young striker recently for the first time. Speaking after Friday’s Champions League draw, he said, “The numbers speak for themselves, of course, he is one of the best strikers in the world right now at his age. I saw few games, honestly, I didn’t have much time. But I saw the highlights and the numbers in the Champions League and the Bundesliga are impressive.”

The Spaniard remained coy on reports linking the Norwegian striker to Etihad Stadium. Pep insisted that he was not going to add fuel to the rumours. “He’s a player from Borussia Dortmund. I don’t like it when people talk about our players. He’s a player for Borussia Dortmund. You understand I cannot answer this question”, Guardiola replied in response.

Haaland, who has 33 goals in 31 appearances across all competitions this season has set the football world alight and has managers scrambling to sign the future superstar.

With former City youth star Jadon Sancho also returning to face his former club, this could be a very interesting match and Pep Guardiola and Co. will certainly be wary of Borussia Dortmund’s attacking force. Man City welcomes Dortmund to Etihad Stadium on 6th April for the first leg of the Champions League Quarter-finals.

Gabriel Menino: A unique talent who has grabbed the interest of Chelsea Football Club
Chelsea’s defensive strength signifies they need NO ONE!
To Top