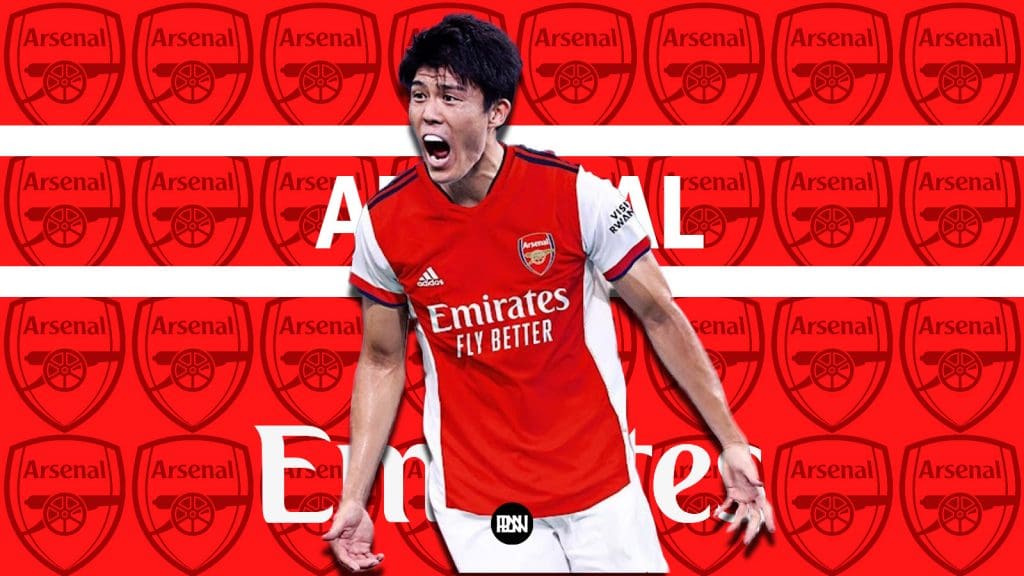 Arsenal have announced the much-anticipated deal for Takehiro Tomiyasu on a five-year deal.

Takehiro Tomiyasu is an experience versatile Japanese defender, who has been displaying consistent performances for Serie A side Bologna. The 6 ft 2in tall Fukuoka-born defender was previously reported to be signing for Tottenham Hotspur before they turned their attention to Barcelona’s right-back Emerson Royal.

Arsenal, in an official statement on their website, confirmed:

“Japan international Takehiro Tomiyasu has joined us from Serie A side Bologna on a long-term contract.

The 22-year-old defender started his career in his homeland with Avispa Fukuoka, where he developed through their youth ranks before making 45 first-team appearances between 2015 and 2017.

In January 2018 Takehiro moved to Europe, signing for Belgian club Sint-Truiden, where he spent 18 months – during which time he was voted as the club’s player of the season for the 2018/19 campaign.

His performances in Belgium earned Takehiro a move to Italy and he completed a move to Bologna in July 2019. During his time in Italy, Takehiro became a regular in Bologna’s defence, making 63 appearances in his two seasons with the Serie A side.

Technical director Edu said: “We’re delighted to have signed Takehiro. We’ve been watching him for a while now and we’re pleased that we have reached an agreement with Bologna. He is an important addition to our squad.”

Mikel Arteta added: “Takehiro is a strong defender with good experience in Serie A and at international level. He’s a versatile defender with great defensive qualities, high technical ability and composure on the ball. He will be an important member of our squad. We look forward to Takehiro joining up with us when he returns from international duty.”

Tomiyasu has represented his country at all levels from under-16s through to the senior side. He has made 23 appearances for the Japan national team and was a member of their recent Olympic squad, making three appearances at the Tokyo Olympic Games.

Takehiro will wear the number 18 shirt.

The transfer is subject to the completion of regulatory processes.”

Coming through the ranks of his local side Avispa and played for Belgian side Sint-Truiden during the 2018/2019 season before joining Serie A side Bologna during the 2019 summer. The then 16-year-old defender commanded a 7million pounds transfer fee despite his inexperience in Europe.

Takehiro Tomiyasu has a commanding figure, who is often being compared to Chelsea’s defender Azpilicueta, due to his ability to seamlessly play in a different role at the defense. He fits into the center-back position in a back three or four and plays as a right-back in a back.

He has been instrumental for Bologna, winning the confidence of his coach and fans with his impressive performances. In the last term, Takehiro Tomiyasu made 16 appearances at right full-back while being deployed into the center-back position on 17 occasions. As versatile as he’s known to be, he’s as well very comfortable with the ball at both feet, racking an impressive 4.16 progressive passes per game last season.

He moves the ball swiftly with his long legs and dribbles impressively. Tsuji Kanji, Mitsuzuki Kickers’ general manager, once said: “when he dribbled, probably no one in Fukuoka had a leg to catch up with him. He was fast.”

HOW DOES TAKEHIRO TOMIYASU FIT INTO MIKEL ARTETA’S SIDE

Takehiro Tomiyasu will be replacing the outgoing Hector Bellerin, slotting into the right-back position and carrying out Arteta’s game plan in his preferred 4-2-3-1 formation. Arteta has mostly preferred to have a three-man defense during the build-up, which allows Tierney to overlap and Granit Xhaka moving into the vacant space on the left side to provide a shield for the overlapping left-back while the right-back moves into the midfield, to support the central midfielder.

With the introduction of Takehiro Tomiyasu, during the build-up due to his versatility and ability to slot into the center-back position, he’ll be taking up the role by joining the two center-backs, forming a three-man defense, which allows Granit Xhaka to focus on dictating the play from the midfield rather than moving out of position to cover the left center-back/left-back position.

Tomiyasu is the kind of profile that fits in next to Ben White due to his pace, quick enough to cover laterally up and down the line as he can overlap and underlap seamlessly. Ben White struggles in the air, as was evident during Arsenal’s opening game against Brentford, where he was constantly dominated in the air by Ivan Toney – relying on Takehiro’s last season’s stats, he won 3.51 aerial duels per game, comparatively, Ben White won 1.46, Gabriel 3.11, Holding 2.46, and Mari 2.9. Both Ben White and Tomiyasu can easily interchange play and position, enabling a perfect blend.

Saul Niguez: What to expect from Chelsea’s new jack of all trades
Is Connor Roberts a smart buy for Burnley?
To Top