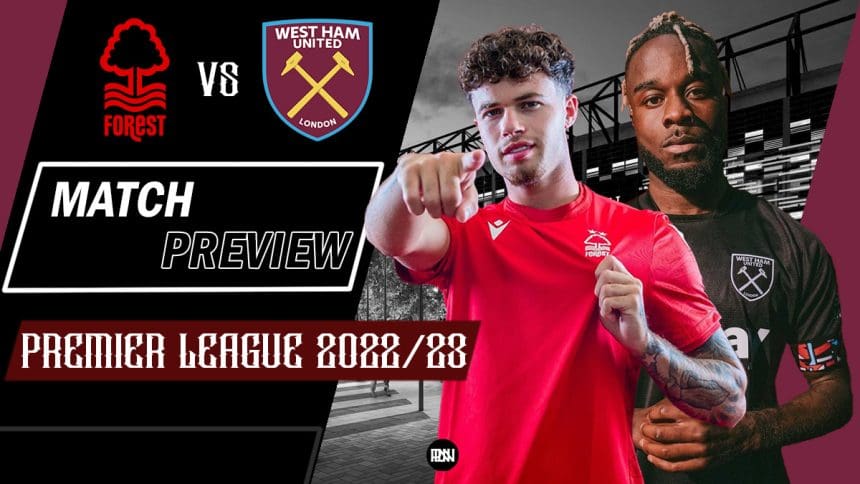 Nottingham Forest will look to pick up their first points of the Premier League campaign, as they welcome West Ham United to the City Ground this Sunday.

Last weekend, away at Newcastle United, Steve Cooper’s side struggled to get into the game at all. The Reds were completely outclassed by a dominant Newcastle side and will want to get back to their best on home turf this Sunday.

Backed by a sell-out crowd, Nottingham Forest have the daunting task of facing David Moyes’ West Ham. Forest probably would have wanted some easier opposition after last weekend’s poor performance, and with the Irons wanting to improve after their opening day defeat to Manchester City, three points seem increasingly unlikely. It’s the first time in 23 years that the City Ground will host a Premier League fixture. With a scorching hot weekend and 30,000 fans in attendance, there is no doubt the atmosphere will be electric.

One of the biggest talking points will be new Forest signing Jesse Lingard, who is likely to start against his former club. The Englishman rejected a return to the London Stadium this summer, and instead signed for Nottingham Forest on a lower wage – something which has left a sour taste in the mouths of many West Ham fans.

Just two weeks into the season and Nottingham Forest’s injury room is becoming worryingly busy. Omar Richards and Ryan Yates have been side-lined since the start of the season, and they have now been joined by central-defenders Steve Cook and Scott Mckenna – leaving Nottingham Forest short on options at the back. Harry Toffolo and Lewis O’Brien will continue to start ahead of Richards and Yates respectively, but questions still remain over who will replace Mckenna in the backline.

If Steve Cooper continues to play with three central defenders, French defenders Giulian Biancone and Loic Mbe Soh will be the two players competing to replace Mckenna. Having arrived this summer, Biancone will be looking for his chance to break into the starting-11 and this could be it. If he starts, Biancone will likely slot into a right-sided role, which could change the dynamic of the central defenders as Joe Worrall and Moussa Nikhate will shift over to the left.  Loïc Mbe Soh impressed in pre-season when given the chance and could also be given a starting berth this Sunday. The 21-year-old has often been used as a backup option throughout his time in the Championship but I can’t recall many moments when I’ve been disappointed by any of his performances although it could be a lot of pressure to drop him into his first Premier League game.

Another option would be for Forest to use a 4-3-3 system which we saw them switch to last weekend. This would give Steve Cooper extra personnel in attack, with the option to play Taiwo Awoniyi as a striker or left-winger as well as playing with two of Brennan Johnson, Sam Surridge or Alex Mighten up there with him.

West Ham are struggling with similar issues, with three defenders – including new signing Naif Aguerd – all doubtful for Sunday’s game. Veteran goalkeeper Lukasz Fabianski is also a doubt after picking up an injury during last weekend’s defeat to Manchester City. Alphonse Areola will start in his place, having joined the Hammers permanently last month. After a dull performance against the reigning Premier League champions, Moyes is likely to rotate his squad and it wouldn’t be a surprise to see new signings Maxwell Cornet or Gianluca Scamacca make an appearance in the East Midlands.

Let’s forget West Ham’s result last weekend. Yes, they had a shocking game, managing just one shot on target and failing to create any big chances, but they played Pep Guardiola’s Man City so that was expected. Moyes will want his team to bounce back in a big way, to start their push for a European spot.

West Ham like to play with as little possession as possible, hurting their opponents when they counter rather than dominating the ball. After watching the Forest game last weekend, Moyes will know that if he takes the game to Nottingham Forest, it’s likely that the hosts will struggle. If they try and play their usual style of football then they will struggle to break Forest down and chances could be at a premium.

Last season we saw Forest play the ball out from defence, looking for passing opportunities to play forwards and wingbacks in behind. Usually, someone like Joe Worrall will look to play the ball wide into the right-wingback or forward into a sprinting Brennan Johnson. If West Ham sets up in a counter-attacking system, the Reds will have the time and ability to play their style of football and will see them play far better than they did against Newcastle. Eddie Howe’s side chased down every ball, shut down every passing option and constantly put the pressure on Forest causing them to turn the ball over high-up and stopped them from moving the ball downfield. West Ham will need to replicate this.

One key battle to keep your eye on will be Neco Williams, Joe Worrall and West Ham’s left winger (Benhrama, Cornet or Fornals). Neco Williams will want to get high up the pitch to support the attack, meaning Worrall will drift out-wide to cover more ground. Worrall couldn’t contain Allan Saint-Maximin last weekend, and West Ham will know if whoever plays on the left can exploit the space left by Williams and isolate Worrall, they will pose a massive threat to Dead Henderson in the Forest net.

In last week’s preview, I singled out Dean Henderson as Nottingham Forest’s key player – and I think it was the right choice. The Man United loanee might not have been the best player on the pitch, but he put in a fantastic performance up in the North East, if it was anyone else between the sticks, Newcastle would have run away with it.

This weekend I’m going for Lewis O’Brien. Once again there was a handful of players I could have picked – Neco Williams, Brennan Johnson and Dean Henderson to name a few, but I think the new arrival from Huddersfield is the one to keep an eye on. Against Newcastle, Forest’s midfield was non-existent. They were bullied and dominated by Newcastle for 90 minutes and failed to link the team together. O’Brien looked good, but he excels when going forward and had too much defensive responsibility on his hands to have an impact on the game.

Orel Mangala should start alongside him and will add some much-needed strength and physicality to the midfield duo. This greater midfield presence will allow O’Brien to buzz around the pitch like he was used to at Huddersfield. The issue will be getting him onto the ball, but if West Ham sit deep and look to counter there should be no issue bringing O’Brien into the game.

For the visitors, it’s hard not to look past the incredible Declan Rice. The Englishman is rightly regarded as one of the best midfielders in the world and is one of the main reasons why the Hammers are top six contenders.

Rice will look to shut down passing options and win possession in midfield, before playing the ball forward. If Rice has a good game and dominates the midfield, he will help West Ham shut down any Forest attacks and could result in the Reds putting in a similar performance to last weekend’s defeat. The 23-year-old has also stated his desire to play higher up the pitch and whilst he is used in a defensive pair, we can expect to see him trying to get higher up the pitch and contributing to the West Ham attack.

Is Harvey Elliott the solution to Liverpool’s midfield crisis?
Next Article

Making sense of Rashford to PSG, and Rashford
Leave a comment