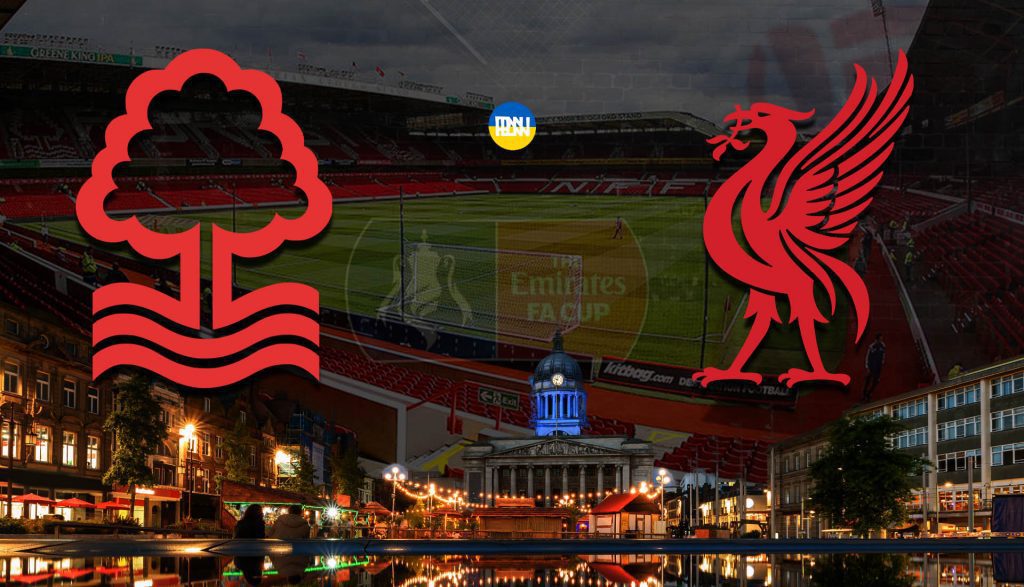 Liverpool will face a spirited Nottingham Forest side before the International break, as the two sides lock horns against each other in the quarter-finals of 2021/22 FA Cup, at City Ground, on Sunday.

Nottingham Forest, have been playing great ball this season. They are currently 8th in the Championship, and do not look as if they fear any side in the dream Cup run. Steve Cooper’s side have been the cause of upset for 2 Premier League teams already this season. In their journey up to the Quarter Finals.

First, the Gunners fall prey to the spirited Garibaldis and then it was Leicester City who were not ready for the riot. In the 3rd and 4th Round of the FA Cup, respectively.

Despite all the goods that have come their way this season, Steve Cooper knows that he cannot get head high over heals. Specially, not now. As his players prepare to host a Liverpool side, which does not look as if they are going to settle anything else for than lifting a quadruple.

Liverpool clearly have an upper hand over their opponents on Sunday. In the history of this fixture, the Reds have won 56  games, lost 30 and drawn 29 times.

However, in the recent past, the two sides have not faced each other much. As this is the first time they are facing each other since 1999.

Firstly, from Garibaldi’s perspective, this is a hardcore test. No matter, how well they have faired so far in the FA Cup this season. They cannot go into the game reminiscing the victories that have led them to the Quarter Finals. However, it will be foolish not to remember the victories over Arsenal and Leicester earlier in their cup campaign. Steve Cooper will surely be asking his players to gain some confidence off of those two amazing victories.

Talking about confidence, Forest are on a 8 match unbeaten run in all competitions. It is astonishing when we uncover the truth behind the unbeaten run. Cooper led side have been playing fearlessly and attacking on will. They have been giving impressions of the Rangers’ side under Steven Gerrard, many believe.

Although, they would have expected themselves to be higher in the Championship table. They still know there is a lot of season remaining to make amends. West Bridgford based club under their Welsh manager have been playing with additional attacking wingers. Adding to the fluidity of the wing play overall. Players like Spence (fullback), Brennan Johnson (Attacking midfielder),  just tend to put in crosses and thread in passes, respectively. If Nottingham Forest have a chance against a rampant Liverpool side, on Sunday, then let me tell you they cannot relax and have to do what they have been doing.

Jurgen Klopp has done wonders with the Liverpool side. I know when I write this, I draw too much attention to myself. But, the German has literally built a team that can now go up and challenge for the titles.

It is not easy to say that going into the game, the Reds have just lost a single game in the last 14 games across all competitions. They have already lifted their first silverware in EFL Cup, after beating Chelsea in the finals. And now Klopp’s army looks to leave their mark throughout the world in trying to achieve the unprecedented- lifting the quadruple.

While there have been no noticeable injuries to the side in the last games. The addition of the Columbian, Luis Diaz, has certainly added to the firepower of the Reds. Diaz has not failed to impress in his debut season in the Premier League. It just does not seem like, Diaz was bought by the club in the winter transfer window. The Columbian has fit in the system very well. Having successfully combining with his new teammates on the pitch, and off it as well.

There has been rhythm to Liverpool’s gameplay in the last 1 to 2 months. Liverpool have hardly put a foot wrong. Who would have thought, back in January, that Klopp’s side could challenge Manchester City for the Premier League title this season? But, after their latest victory against the Gunners. They go within one point of the defending Champions. Where all the focus is on the underdogs, Klopp will be eyeing for a walk in the park given everything flows as it is.

Forest & Steve Cooper have a list of injuries to deal with going in the match on Sunday. Steve McKenna, Max Lowe, Lewis Grabban and Steve Cook are all out due to injuries.

With a series of injuries, the Welsh will surely be looking to pull out through the backups. And will be handing the opportunities to the likes of Yates, Keinan Davis and others to show their worth as they have a few times this season.

As for Liverpool, both Trent and Salah have been ruled out due to injuries. While Klopp hinted as a precautionary rest for the Egyptian, he sounded equally concerned for the longevity of the English full back’s hamstring injury.

The German also confirmed that there will be no Caoimhin Kelleher between the sticks for the Reds, as Alisson will continue as the no. 1 choice. Although, there are no further reported injury concerns, Klopp would be feeling al jittery with the absence of two of the most serious contributors for the Club this season- in Salah & Trent. While, there is a high possibility that Bobby will be given a start on Sunday, to deputize in the absence of Salah if Klopp decides to rest Mane.