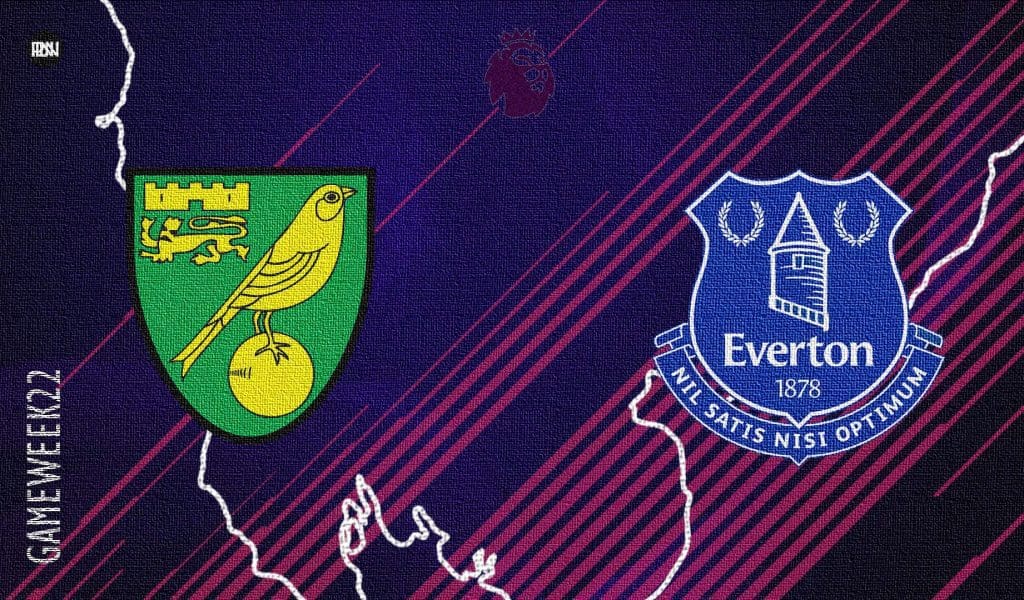 Premier League game week 22 is going to be interesting for both Norwich City and Everton as both of them are struggling to achieve their targets. Everton are currently at 15th position in the table and would want to be out of the relegation zone while Norwich City are currently 20th and are battling to come out of the relegation zone. In the head-to-head battle between the two teams, Everton has a slight edge as it has won seven out of the nineteen games played between them but Norwich City would also not completely lose hope as they have defeated Everton 2-0 once. Predicting a winner would be very difficult but we’re definitely up for a hard-fought encounter.

Norwich City will keep on dealing with its set of injuries and will play again without the services of Christoph Zimmermann, Lukas Rupp, Mathias Normann, Billy Gilmour, Andrew Omobamidele through injury. Good news for the Canaries fans as Todd Cantwell is back and ready for selection.

Speaking on Friday morning, Dean said: “We’ve got Todd Cantwell back training, he trained on Thursday. He’s back available for the squad. I wanted him to travel to West Ham but he came into the training ground and he was ill so we sent him home. Todd wasn’t quite ready for that first game (against Southampton) when I threw him in. It’s been a bit stop-start for him since he’s had a knee injury and illnesses. But we want to get him back as soon as possible”. Head coach Smith is expected to shuffle the squad with players like Jakob Sorensen who could get a chance in the central midfield.

Speaking at his pre-match press conference at USM Finch Farm, Benitez said: “All of the players were training yesterday [Thursday], so at the moment the only one not available through injury is just Tom Davies. He had his operation. All the others were training and now we have to treat them carefully. At the moment they are fine, then it is up to us to see who can be available for his game or the next games. We are quite confident we have people coming back…but they are still not fully fit. It is important to understand match fitness comes with games.”

Anwar El Ghazi will most likely make his debut after his loan move from Aston Villa while Alex Iwobi will miss out as he is occupied with the African Cup of Nations. Players like Yerry Mina, Richarlison, Branthwaite, Delph have also been taking part in training sessions and their match fitness will be assessed before the clash.

Norwich have suffered their sixth straight Premier League defeat, which made it eight matches without a victory. Norwich have won two of their last four games against Everton but have lost the last two consecutive games. Everton will also be looking to record their first victory in the Premier League since the start of December. Both teams have been in poor form in the Premier League but have a lot to fight for as one will fight to steer clear of the relegation zone and one will fight to come out of the relegation zone.

Finnish striker Teemu Pukki has performed well and delivered when needed for Norwich this season. He is one of the few players who has been reliable for Norwich on the forward side of the pitch. In his nineteen appearances for the club this season he has scored five important goals and will be the danger man for Norwich. Everton will certainly close him out and not concede any penalties as the two of his five goals have come from scoring penalties.

The 2021-22 season for DCL has been shaky due to long-term injuries. He has been missing most of the action this season and is back in full training for the Toffies. His lack of game time cannot make Norwich take him for granted as even in the four appearances for the club this season he has scored three goals and has been the danger man for Everton since two seasons scoring sixteen goals in the 20-21 season and thirteen goals in the 19-20 season. His comeback on the pitch will certainly make him crave for goals and will be the player to look out for Everton.