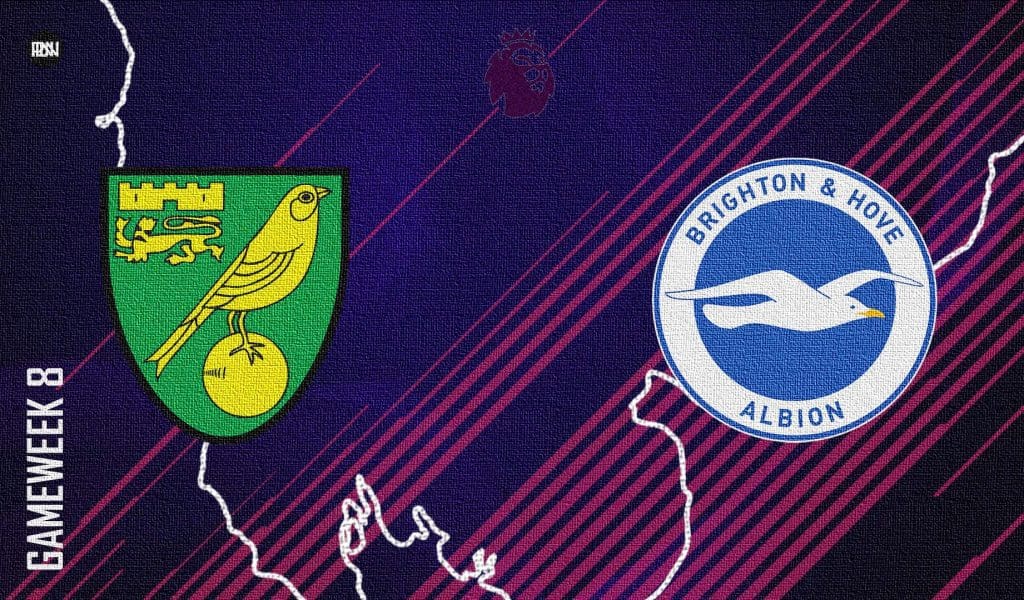 The October international break has come to an end, and after a fairly decent few international games, fans are eager to get back to club football, and especially the thrilling life of Premier League football. With 7 games played each, the league table is gradually beginning to take shape, although it is very tight at the top as well as the bottom of the table. In this week, the surprise of the season so far, Brighton and Hove Albion take on the relegation-threatened Norwich City away from home.

Norwich City have had a humble return to the Premier League, after absolutely dominating the Championship last season. While survival was always going to be tough for the Canaries, their form from last season and their summer activity gave the fans and neutrals hope. So far this season, they have had six losses and one draw to give them a solitary point after 7 games, which has left them at the bottom of the table. It seems to be the same story yet again for Norwich, who have earned the tag of a ‘yo-yo’ club over the past few years. Manager Daniel Farke and his men still have some time on their side, and they will hope for a miraculous turnaround to avoid yet again relegation.

Brighton and Hove Albion have surprised everyone this season, with a brilliant start to the season. With 4 wins and 2 draws in 7 games, the club sits just 2 points off the top and level on points with the likes of Man United, Man City, and Everton. There is a buoyant mood among Brighton fans at the moment, with no one expecting the Seagulls to have such a good start to the season. Their problems in front of goal from last season seem to have disappeared and under Graham Potter, the Seagulls look like a hard team to beat. Brighton fans will be hoping that they can keep up this form till the end of the season, and snag an unlikely and stunning European spot.

Norwich City have some mixed news on the injury front. Full-back Sam Byram is expected to miss out on Saturday against Brighton. However, a trio of midfielders could feature, with Todd Cantwell, Christoph Zimmerman, and Mathias Normann all set to return to the squad. Thankfully for Norwich, they were no injury concerns in the international break, with all players returning back unscathed. Striker Teemu Pukki, who became the record Finnish goalscorer on Tuesday, will be expected to start up-front.

Brighton and Hove Albion will be without striker Danny Welbeck and midfielder Steven Alzate, as both players are still recovering from their respective injuries. Defender Adam Webster could feature if he is passed fit for the trip to Norwich, with the centre-back having been out of action since suffering a hamstring injury in their 1-0 win against Brentford last month. Midfielder Enock Mwepu is a doubt about the visit to Carrow Road and faces a late fitness test. Mali international Yves Bissouma was reportedly arrested in the international break and made bail, and it is unknown if he will return to the squad. He was also suffering from a knee injury, which could keep him out for a few weeks. It remains to see if full-back Tariq Lamptey starts for the Seagulls, with the young Englishman being eased into the team after his long spell of injury.

SEAGULLS QUALITY TO BE TOO MUCH FOR CANARIES?

Brighton have played an attractive brand of football under Graham Potter ever since his appointment in 2019. He has been a breath of fresh air after Chris Hughton departed, and everyone at the club is very happy with how far he has taken the club. Last season, Brighton showed glimpses of what they can offer on a daily basis and since the start of this season, they have done just that and have looked very organized.

The Seagulls have been efficient in defense, midfield, and attack as well, and have shown they have goals in them which was what they were missing last season. Star players like Lewis Dunk, Yves Bissouma, Adam Lallana, Neal Maupay, and Leandro Trossard, have been in form while their goalkeeper Robert Sanchez has hardly put a foot wrong since his promotion to no.1 last season. If Brighton continues their current form, they will definitely be within a shout of the European spots. Graham Potter seems to have addressed their issues from last season and filled in the gaps and has turned the club into a very solid outfit.

Brighton’s rejuvenation could be bad news for Norwich City who have already had a dismal and poor start to their season. They have faced the likes of Man City, Arsenal, Liverpool, Everton, and Leicester City, giving them one of the toughest opening fixtures in the whole league. Understandably, they haven’t been able to get points on the board, and it seems their misery will continue on Saturday. Brighton & Hove Albion are looking like an incredibly hard team to beat, and a team that can take on the top teams in the league. With Norwich’s defensive and creative woes, it has left the team as the worst in the league so far. Despite their summer activity, the Canaries have not hit form and have the look of a disjointed outfit.

It will be upto Daniel Farke and his players to dig in deep and find their groove if they want to have any hopes of surviving a season in the Premier League. As for Saturday, while it seems Brighton will brush aside Norwich, the Canaries can still stun the Seagulls and it all makes up for an exciting clash at Carrow Road.

The Finnish striker has been the standout Norwich player for a few years now, and has been their main goalscoring outlet. Pukki has shown his goal-scoring competence in the league despite been starved of goal-scoring chances. He showed on international duty his goal-scoring prowess when he scored a brilliant brace to smash the Finnish record and become the top goal scorer for his country. Teemu Pukki needs only half a chance to score, and unfortunately for him and Norwich, they have not been able to create even that much. Norwich have scored just 2 goals in 7 games so far, with Pukki scoring both. He is the main attacker for the club, and an extremely invaluable player for the Yellows.

He will be the key to helping the Canaries get their season back on track and Brighton will definitely have to keep an eye out for him if they want to prevent Norwich from scoring. Although the Brighton defense is solid and hard to break down, Norwich could bide their time and will have to take any opportunity given to them by the Seagulls to get a surprise result at home in front of a packed Carrow Road.

It will be a battle of strikers on Saturday, as Pukki will go up against Neal Maupay of Brighton and Hove Albion. The striker has been in great form this season, scoring 4 goals so far and being instrumental in his club’s rise to the top half of the table. The French striker had a few problems last season and was only able to score 8 goals. However, this season he seems to have turned a corner and has already reached halfway to last season’s tally in just 7 games.

Graham Potter’s setup greatly benefits Maupay, with the striker being barely involved in the build-up play, but being in extremely good positions to finish off the attacking moves and secure points for his club. He provides huge influence in the final third, Maupay has structured his game in the area it matters the most and is also taking the chances that come his way. The 25-year-old looks on course to beat his tally from last season comfortably, and get even more than his career-high tally of 10 goals in the league from the 19/20. Maupay and Co. will be licking their lips at the prospect of facing a significantly weaker defense on Saturday and will be looking to get as many goals as possible.