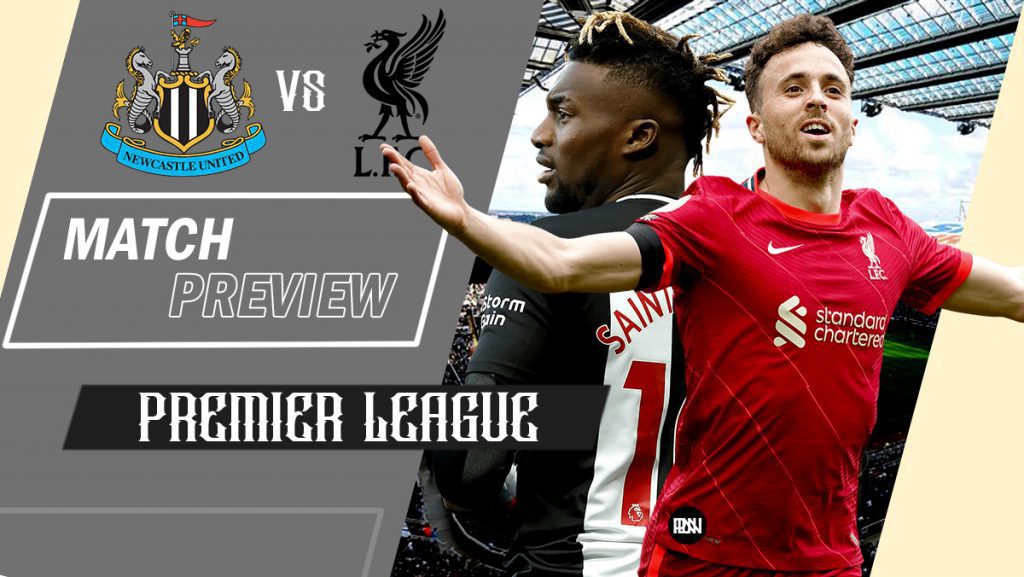 Jurgen Klopp marshals his men as Liverpool travel all the way to Tyne to face a spirited Newcastle United side in the clash between the two teams in the Premier League, at St. James’ Park, on Saturday.

Liverpool and Newcastle lock horns in the Premier League for the second time this season. The last time the two sides faced each other, Klopp’s side eased past the struggling visitors, 3-1 at Anfield.

However, a lot has changed since then. A new owner has certainly played the biggest of all parts in that development for Newcastle. From going all out in the winter transfer market, to literally outclassing themselves every time they step on the pitch. Although they have had a few downhill moments in there, like a thrashing at the hands of Spurs, but they have now got stability and a belief in the squad.

Going into the match on Saturday, Klopp and co. will be favoured to repeat the heroics again as they did at home back in December. But they know, it is easier said than done.

Meanwhile, Eddie Howe would be wary of the fact that it’s one of the most difficult challenges to face Liverpool given the current run the Reds are on. But they will be looking to get the backing of the thousands of home fans in black and white to at least get something out of the matchday.

THE LAST TIME THEY FACED EACH OTHER

Jurgen Klopp’s men came back from behind to beat Eddie Howe’s side, the last time these two sides faced each other in the Premier League, back in December. However, to be fair to the Magpies the scoreline does not show how well they played for the first quarter of the game.

But football is not about quarters, it is about how well you can do for the whole 90 minutes without lagging behind. And the Reds did just that. Despite trailing the game for the first 20 mins of the game, through a Jonjo Shelvey free-kick, Liverpool scored 2 goals in 2 minutes to gain the upper hand in the game.

Both Jota and Salah scored one after the other before Trent Alexander Arnold wrapped it up at the very end with one of the best strikes of the season to make it 3-1.

While the Reds will be expecting a similar kind of result, the home fans will be eyeing for a spirited performance from their side given a change of squad setting this time around- if it is anything to go by.

HOW CAN NEWCASTLE HURT KLOPP & HIS TACTICS

Liverpool goes into the matchday, on Saturday, with 12 wins out of 13 on the trot, in the Premier League – including a draw against Manchester City.

It is not a fluke when you’re in such an explosive form. Be it in the Premier League, or across Europe, it seems nothing is going out of sorts for Liverpool this season. Jurgen Klopp, without any doubt, has set up a hardcore squad that has adapted to the German’s heavy-metal system. But even they have had moments that could prove fatal in the match if committed again.

No doubt Eddie Howe will look to work on these low moments to hit the in-form Reds. The English Gaffer will surely look to exploit the defensive highline of his counterpart German’s Liverpool. Recently, they have been keeping a very highline of defence, often exploiting their custodian Alisson – who has been superb between the sticks this season.

Newcastle United have the newly found rhythm now and the services of the newly bought Brazilian midfielder in Bruno Guimaraes, to rely upon. They showed in their last game against the Canaries, in the 3-0 victory, how they will be going about their business in the last few remaining games of the season.

The Magpies are on a hot run themselves, with 4 wins in 4 games, while the new boy Bruno has been keeping his hot goalscoring intact as well. Thus, this overall show of courage and hard work have proved vital for Eddie Howe’s side as they rise from the brink of relegation up to the top half of the table – they currently sit at 9th going into the matchday. And they will at least look to scrap out a result with all of these plus points on their side.

Overall, this could be a huge battle between the 2 sides as Newcastle will try and continue to set their mark. And as for Liverpool, well, they will just keep doing what they have been throughout the season and will look to go above Manchester City for the time being, until the Cityzens play Leeds later on Saturday themselves. This title race is taking its most lethal form, as the end nears.

MO SALAH – A THREAT IN HIMSELF, LET ALONE THE WHOLE LIVERPOOL SIDE

It shouldn’t come as a surprise if it got reported that Eddie Howe worked more on stopping Salah than he did on Liverpool, coming into the game on Saturday. And why not so? The Egyptian has been in such tremendous form this season that it is hard not to include him in your team talks, as a manager.

While Mohamed Salah had to recover from 2 heartbreaks with his national side, first AFCON then World Cup qualifiers, both at the hands of his club partner, the Senegalese international Sadio Mane. The Egyptian has been much harder to stop, now that he has success on his mind with his club.

While this season has been a spectacle to Salah’s brilliance. It has been accompanied by Liverpool’s great form as well. From setting up the Egyptian to scoring the goals after getting at the end of his passes, teammates have been greatly supportive in Salah’s rise. He already is leading the top scorers’ chart, with 22 goals throughout the league campaign so far. Whereas, he has also assisted another 13 goals for his teammates in the Premier League this season. These stats add up to a total of 35 goal contributions in just 31 league games. Not to ignore the fact the Egyptian left almost 3-4 weeks of club football action, due to the AFCONs.

Jurgen Klopp will be more relaxed than the two managers, going into the matchday on Saturday, as he also got his other African forward, Sadio Mane, back in form. The combination of Salah and Mane have been running riot in the last few weeks, giving a glimpse from the old days to some of the Liverpool fans.

Mane has scored 4 goals and has also provided an assist, in the last 6 games for Liverpool across all competitions. No doubt the travelling fans will be expecting more of the same from their delightful African duo.

The home camp is suffering from the quartet’s injury for a very long time now – Trippier, Wilson, Jamaal Lewis and Isaac Hayden. While Eddie Howe is also missing the like of Ryan Fraser going into the game.

However, they have coped up well with all the winter signings playing their exclusive roles whenever called upon. The likes of Almiron, Schar and Shelvey were rested in the last victorious game against the Canaries, and Howe would love to deputise them back into the squad after the week’s rest.

Meanwhile, there have been no severities in the away camp. Klopp and Liverpool are coping well, with the hectic period. Bobby Firmino is the only known player to have been going through a niggle, but the Kop could expect to see their Brazilian magician back any time soon.

It could be very well expected that the German will make a few rotations to the starting XI that came out triumphant against Villarreal in the mid-week.

OFFICIAL – Jurgen Klopp has extended his contract until 2026
Manchester City away kit for 2022/23 season LEAKED!
To Top