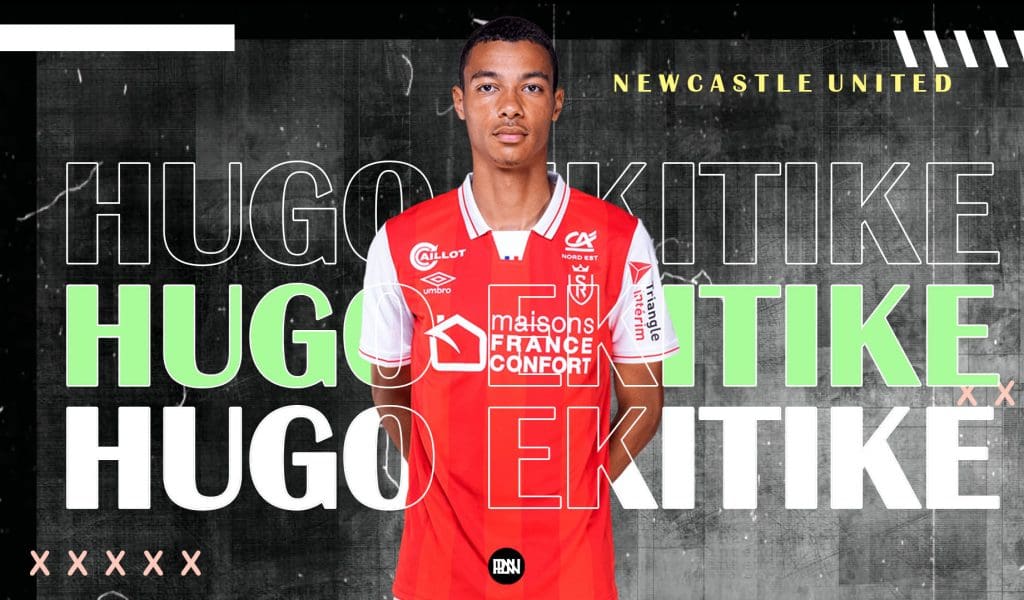 When Saudi Arabian billionaires freed England’s greatest underachievers from Mike Ashley’s prison of despair, little did the fans know that they are in for some treat as the steep rise of the men from Tyneside continues.

Earlier this week The Magpies were linked to Arnaud Kalimuendo, the young PSG attacker and this time they have hit the news for reviving their interest in Hugo Ekitike after the French teenager had rejected a deadline day move to St. James Park in January. With Callum Wilson, Chris Wood, and Dwight Gayle all approaching their thirties, a young striker might be at the top of Newcastle’s wishlist, with Kalimuendo being one of the names circulating.

Rising through the ranks

Carrying out the legacy of producing sensational talents in Ligue 1, Stade de Reims’ new bet is Hugo Ekitike. Hugo Ekitike started off his football career in Reims’ youth system. In 2020, he signed his first official contract with Reims and went to feature in 23 matches, with 9 times his name being on the scoresheet. He also had a brief loan spell at Danish Superliga club Vejle Boldklub in 2021, where he played 13 times scoring 3 goals and assisting another one. Due to a hamstring injury, he has been out of action since February, with Reims falling significantly and winning only three games during his absence. He is yet to receive his senior international call up but has represented Les Blues in U20 matches a couple of times and is just a few days away from being in contention to get his debut should he continue his promising development.

Off the ball movement

Ekitike has a lot of weapons in his arsenal with his off the ball movement being one of the finest. The closer he is to the opposing goal, the better. As the season has progressed, he has improved the potency of his threat against defences by focusing more on runs in behind. Ekitike’s off-the-ball movement is especially noteworthy because of his timing. He timed his movements quite well, typically attempting to stay behind the defender.

The 20-year-old also possesses the intelligence to indulge in one-touch finishes. This comes from his excellent game reading skills and a good sense of positioning. To add to that statement, Ekitike’s goals this season have mostly come in fast-paced circumstances where he has had to finish quickly with one touch. This demonstrates Ekitike’s strong spatial awareness, scanning vigilance, and tactical acumen in skillfully manipulating the shape of the opposition with minimal movement.

Long and intelligent mobility, persistence, aggression, and a strong work rate are all crucial attributes for Ekitike in the last third and when defending in deeper areas. As indicated in the previous section, Ekitike has a habit of finishing off one touch a lot, and his movement and anticipation allow him to do so. Ekitike’s work rate and persistence enable her to get on the end of rebounds, which might mean the difference between one and three points in a football game. His defensive actions per 90 also contribute to his team’s success, averaging 1.10 interceptions per 90 minutes puts him in the 99 percentile amazon top players in Europe’s top 5 leagues, which is complemented by his 1.25 tackles per 90, making him a regular participant in his team’s defensive activities.

Do Newcastle United need him?

In one word, yes. Eddie Howe had strengthened the squad in the January transfer window with a few additions, thanks to their newly found riches. Although, the attack is a department that lacks a proper goalscorer. Newcastle’s highest goal scorer, Callum Wilson is over 30 and is very injury prone as he has only featured in 15 matches this season. Chris Wood, The Magpies’ new acquisition from Burnley has not lived up to do justice to his name. Although Newcastle United are also keeping tabs on other strikers, Hugo Ekitike is surely an interesting prospect.

With that 6ft 2in frame, Hugo Ektike is a promising forward with skills in off-the-ball movement, one-touch finishing, persistence, work rate, driving into space, and standing ball protection. Meanwhile, Ekitike’s one-touch passing, physicality, heading accuracy, and 1v1 dribbling are all critical areas for him to strengthen in order to advance to the next level of his development. The stable platform he’s been given at Reims appears to be critical to his current growth, which is why not hurling himself into the thick of a Premier League relegation battle on transfer deadline day was a more than prudent decision. However, a move to arguably the world’s most competitive league might even cement his place in the list of generational talents.

MUST READ: Does Chris Wood have a future at Newcastle United?