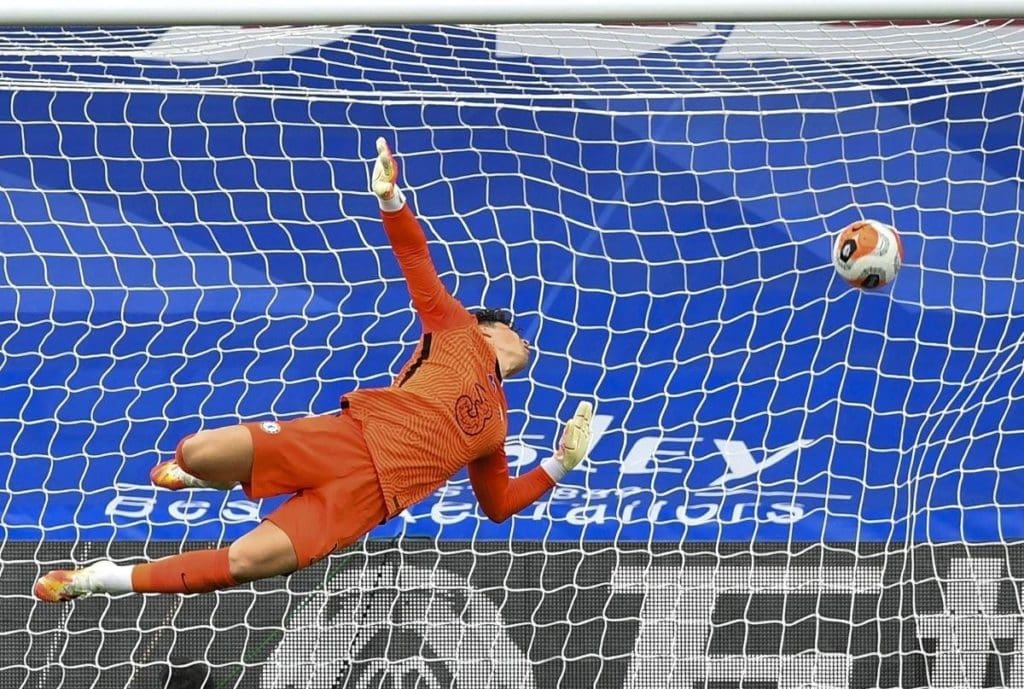 As the 28th season of Premier League football as undergone conclusion with Liverpool famously lifting up the title after a thirty year drought, the clubs will start to evaluate the positives and negatives of their 19-20 campaign.

The time has come for us to list the flops of the season. Here’s our XI of the most disappointing team of the season:

We start of the list with an obvious player, Kepa Arrizabalaga. The world’s most expensive goalkeeper Kepa was brought from Athletic Bilbao for a tune of €80 million (£71.6 million) breaking the record set by Liverpool’s Alisson Becker. It is no doubt who has got the better end of the deal, with the Brazilian going on to be one of the best keepers in the world.

Kepa had a solid campaign in 18-19 were he kept 14 clean-sheets and helped his team win the Europa League. But this season has been disappointing, with xG predicting that Basque shot-stopper has let in 12 goals more than expected . He has recorded the second lowest save percentage in the league with 48.7%. The Spanish International has looked nervous at times and it’s Frank does not trust him anymore, even dropping him for the final fixture against Wolves, were The Blues needed a point to qualify for the Champions League. Kepa days at Stamford Bridge are going to be numbered with Chelsea actively searching for a new No.1 in the transfer market.

The English No.1 has been in horrible form since his £30 million switch from Sunderland. Pickford has just kept nine sheets this year and if it weren’t for Kepa’s torrid form, he would have surely  made our XI for this season.

Kyle Walker had a difficult 18-19 campaign and his form suggested that he may become a bit-part player in the upcoming years. So Manchester City splashed a world record £60 million in a deal were Danilo was sent to Juventus in part-exchange and plus £27.4m in cash.

But ever since his switch, Pep has not favored the Portuguese full-back handing him just 13 starts. Stats do suggest that form has not been an issue with former Benfica player completing 3.6 tackles&interceptions and 2.2 dribbles per 90 with pass completion rate of 90.6%.

It’s probably harsh that we have included him in our team but when you pay a world-record fee for a player you expect similar kind of output. Walker’s superb 19-20 season has added to this problem and Cancelo may find difficulties to settle in the Blue half of Manchester.

After a difficult time with AFC Bournemouth, Mings was sent on loan to Aston Villa. He impressed the manager Dean Smith, helping Villa get the promotion back to Premier League. This prompted The Clarets to sign the defender permanently for a fee of £25million.

At the start of the campaign, he was pretty solid and even received a call from Gareth Southgate to feature in England’s UEFA Euro 2020 qualifiers against Bulgaria and Kosovo. It’s been pretty downhill from thereon with his performances letting the side slip in the relegation spots.

He was part of a defense which conceded 67 goals in the league which was second worst behind Norwich. Villa narrowly avoided the drop on the final day of the season and if their were to avoid defensive woes next season, Mings will step-up his performances in a big manner.

After an amazing 18-19 campaign things were looking pretty good for Issa Diop. Rumors linked him for a switch to Manchester United and a call-up from France manager Didier Deschamps was pretty looking imminent but Diop’s drop in form in this year has been nothing short of a surprise for everyone.

His offensive output has improved but as defensive statistics are at a all-time low with just 2.3 tackles&interceptions completed compared to 4 in the last season. His composure on the ball looks a little bit shaky but new manager Moyes has backed him in difficult season.

It’s been three years since Benjamin Mendy switched AS Monaco for Manchester City, with the Citizens paying a world record fee of £52m. But injuries have plagued Mendy’s time in Manchester with the French International managing to play only 36 times out of a possible 114 games in the league.

Pep has had to play Fabian Delph, Angeliño and Oleksandr Zinchenko in left-back slot.And whenever Mendy was fit, his performances were really excellent but the time in doctor’s treatment table has taken a toll on his form with 19-20 season a good example of it.

Known for his attacking output, this year number of assists have dropped from 5 to 3 despite playing eight matches less this year. Even defensively he has looked vulnerable. He was at fault for 2-1 loss at Chelsea, giving the ball pretty cheaply allowing Pulisic to score the opening goal. Similar performances against neighbors Manchester United and Wolves has his left future at Etihad Stadium in doubt.

Probably Tottenham’s most important player in recent history along-side Harry Kane and Christian Eriksen, Jan Vertonghen’s form has dropped off massively this year. Jose Mourinho has preferred the pairing of Dier and Davison Sanchez at centre back leaving Jan on the sidelines only to be called after Dier picked a four match ban.

John Stones’s transfer to Man City hasn’t worked out as planned with, the England International set to leave them possibly at end of the campaign. He has fallen pecking order after a disastrous 2020 with the Spanish coach Pep Guardiola preferring Fernandinho, Garcia and Laporte ahead of him.

After the departure of Mousa Dembele to Guangzhou R&F, Tottenham Spurs were in the transfer market for a replacement. After months of negotiations with Lyon, Spurs finally landed  Tanguy Ndombele for a club record  €62 million (£55.45 million) plus up to €10 million (£8.97 million) in add-ons. This looked like a match made in heaven with Ndombele scoring on his debut and further putting a man of the match performance against Southampton.

But Mauricio Pochettino was sacked and in came Jose Mourinho. Unfortunately Tanguy suffered a groin injury which kept him out 20 days. To add insult to this injury Jose urged him to play through injuries and a series bad performances followed up with the most noticeable one being the game against Burnley were he was subbed-off after half-time. Mourinho criticized the player for lack of application and even broke the lock-down rules to train him individually. His stats have dropped off massively with just 4 goals & assists to his name compared to previous’s campaign 8. He completed 3 defensive actions per game last year compared to this year’s 2.

Tottenham are reported looking to sell him on loss after just one season of Premier League.

Partnering the Spurs midfielder is Ruben Neves. In the 18-19 season, Neves helped The Black Country Club finish 7th and as a result they qualified for the Europa League. While Wolves have continued to be superb this year finishing with two points more than the previous campaign, Neves has had a pretty disastrous campaign by his standards. Apart from a few good performances, Neves has looked relatively flat.

Still just 23 year-old, the Portuguese manager will back himself to have a great 2020-21 season starting in September.

Yes, yes Mesut Ozil is still an Arsenal player. It feels light years ago when Ozil graced his presence at a football pitch. The former Real Madrid has continued his difficult time at the Emirates Stadium and new manager Mikel Arteta has made it clear that he wants Ozil out of the club.

On paper, he is still Arsenal’s chief creator with 2.1 chances created per match, only Nicholas Pepe has created more than one chance in the current squad. Ozil’s stats are at a all time low with only 3 attacking contribution in the 1450 minutes he has played this year.

Mesut currently earns a ridiculous £350,000 a week with still one-year left on his current deal. It’s unlikely that any potential club will take a pun on the once hauled as “probably the most brilliant footballer we have or ever had” by his German teammate Mario Gomez’.

Manchester City paid a club record €70 million to bring the Spanish International as a replacement for the 34 year-old Fernandinho but has failed to live upto the expectations. Although he has been defensively sound, he has not been able to fill the boots of his Brazilian teammate.

Fernandinho’s ability to sniff out of danger has made him probably one of the best this game has ever seen which is down to experience and Rodri is still 24 which gives him plenty of time to develop.

Once a undroppable player under Jose Mourinho, Lingard has become some what of a meme these days. Had it not been his strike in the 2-0 win over Leicester City on the final day fixture, Lingard would have completed 19-20 campaign without any goals or assists. With introduction of Bruno Fernandes to league, surely we can see that Jesse’s days in the Premier League are numbered.

It’s quiet surpising that we haven’t included a player from Norwich City considering the fact that they were the worst team in the entire league. As most of their players are young and even some of them faired well but Josip Drmic had a horrible campaign. Signed from Borussia Monchengladbach he ended the season with no goals or assists.

To be honest, Zaha can play at a higher level, but his contract with Crystal Palace which runs up to 2023 is causing massive problems for potential suitors. All in all Wilfried Zaha has had a disastrous campaign, scoring just four goals and assisting another three which is his worst return since 14/15 season as The Eagles finished 14th in the league standings.

A great dribbler of the ball, Zaha has completed second most taken-ons in the league behind Adama Traore but has seriously lacked the end product needed to score or assist the goals. Maybe in better side with better players around him Zaha can maximize his potential but it remains to be seen which club will the ridiculous evaluation of £80m.

When Newcastle United paid a big £40m for Brazilian forward Joelinton, their were massive expectation on his shoulders to replicate loanee Salomón Rondón’s output from the previous campaign. But Rafael Bentiez left and in came Steve Bruce.

Joelinton’s form suffered massively under Bruce’s defensively style of football and he ended the campaign on just two goals. That being said he has missed big opportunities on multiple occasions, been extremely shaky at times and looked incredibly uncomfortable in front of goal.

We could not have completed this list without including Ryan Fraser. After a fantastic 18-19 season where he contributed to 21 goals& assists, it looked like Fraser will finally get his dream move. Rumors linked him to Arsenal but no summer move materialized and the Scottish International refused to sign an extension.

This season he has abysmal contributing to just 1 goal and 4 assists in 28 matches and now he is linked to teams like West Ham and Crystal Palace, what a fall from grace!!!

Haller case is kind of similar to Joelinton. After a impressive start to the season where scored four goals and provided one assist in the first eight matches, he went into a goal drought for eight matches. Pellegrini was sacked and in came a defensive coach David Moyes. After initally trusting Haller, Moyes became impatient with the record signing and emergence of Michail Antonio signalled an end to season. Still he ended the campaign seven goals and one assist in 2200 minutes which is not bad but for £45m signing this is not great.

If it wasn’t for the 9-0 win against Southampton, Ayoze Perez’s season would have definitely being considered a failure. He looked extremely uncomfortable playing as a right winger rather than his preferred second striker role. In 33 league appearances he has contributed to 13 goals&assists which makes his inclusion a little harsh.