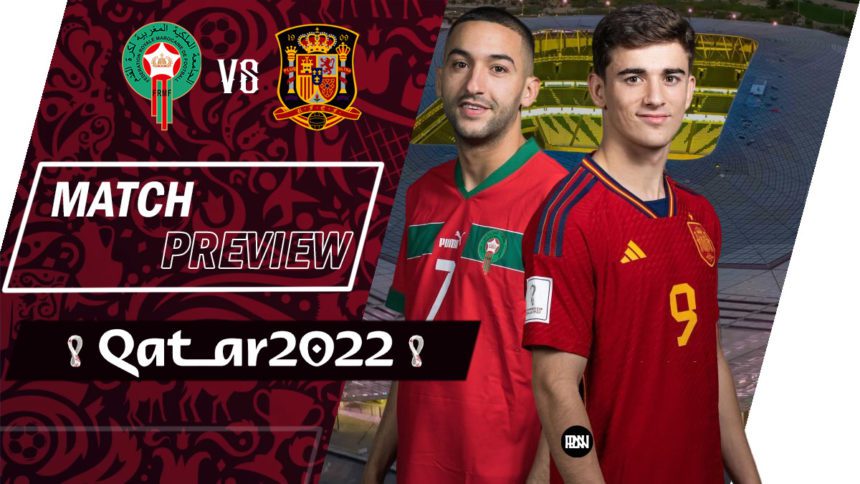 Morocco will play Spain in the round of 16 of the World Cup after topping a group that also included Belgium and Croatia.

Even yet, the Atlas Lions have made a good impression despite having a less than desirable opponent. Only an own goal has so far managed to get past their defence, and few can question their ability going forward as they go to the knockout stages for the first time since 1986.

Morocco gained full control of the underwhelming play of Belgium’s golden generation and Croatia, last year’s runners-up, to surprise everyone by emerging first in Group F with seven points out of a possible nine.

Even though Croatia and Walid Regragui’s team drew 0-0, they were praised for their performance. Then, after swift victories over Belgium and Canada, they joined Senegal as the only other African teams still standing in the round of 16 of the World Cup.

Meanwhile, La Roja had to go through a mixed group stage. Luis Enrique’s team still has a lot to prove despite playing well against Costa Rica, competently against Germany, and poorly against Japan.

Alvaro Morata’s strike in the 11th minute versus Hajime Moriyasu and his recurring super subs eventually amounted to almost nothing, and Luis Enrique didn’t hold back when his team couldn’t hold on to a one-goal advantage over Japan on the penultimate matchday in Group E.

Three minutes after the game’s restart, Japan equalised thanks to a long-range shot from Ritsu Doan that Unai Simon allowed to slip between his hands. After Kaoru Mitoma had just about succeeded to retain the ball in play, Ao Tanaka scored the game’s late winner three minutes later.

Although there was much discussion about whether Mitoma had prevented the full ball from crossing the goal line, the only statistic that counted was the score in the upper left-hand corner, as Spain dropped to second place in Group E and was edged out by Germany on goal differential.

Given that they would have played Croatia in the round of 16, some people would see La Roja finishing in second place as a blessing in disguise, but Enrique is well aware of how difficult Tuesday’s match will be.

Morocco and Spain will face in a World Cup matchup four years after their group stage match in Russia, where La Roja required a late Iago Aspas goal to force a draw. At Education City Stadium, an extremely close game is anticipated.

Yassine Bounou, the starting goalkeeper for Morocco, was able to play the full 90 minutes against Canada after feeling sick just before the win over Belgium and having to leave at the last moment. He can now hope to be included in an untampered XI.

Despite having some ankle issues, Achraf Hakimi—who delivered a lovely assist for En-Nesyri’s goal anticipated to be in good physical condition. However, the Paris Saint-Germain right-back was one of numerous starters who did not participate in full training on Saturday.

In addition, players like Sofiane Boufal, Sofiane Amrabat, and Ziyech received some much-needed rest. However, there is no reason to think that they won’t be available for Tuesday’s game.

Cesar Azpilicueta, David Raya, and Dani Olmo were all absent from Spain’s training session on Friday, while it was assumed that the former had just needed to relax following a taxing group phase.

Despite his error the last time out, Simon was always expected to receive the nod to start in goal. Azpilicueta, who was replaced at halftime against Japan, is struggling with problems in his calf, and the grounds for Raya’s unavailability are yet unknown.

Ferran Torres and Jordi Alba are expected to return to the starting lineups despite Luis Enrique handing well-deserved debuts to Nico Williams and Alejandro Balde against Japan.

Morocco is expected to employ a counter-attacking style of play, looking to quickly transition from defence to attack and exploit the space left by Spain. Their style of play involves quick passing and movement off the ball I order to fashion out chances for their forwards.  They will not be sitting too deep like Costa Rica did in the Spain’s World Cup opener as this would allow them to dictate tempo for long periods and one cannot afford to do so against La Roja.

As it has been under Luis Enrique, the Spaniards will aim to enjoy plenty of possession and keep control of the game of large periods of the match. La Rosa have completed more than a thousand passes in 2 of their 3 group stage games and one can expect them to complete just as much, if not more against the Moroccans. Their style of play involves keeping the ball and passing it around the pitch in order to create space and opportunities for them to attack.

Hakim Ziyech is considered to be one of the key players in the Moroccan team and his importance to the team cannot be understated. He has displayed his creative and technical abilities and has the ability to unlock the Spanish defense and create scoring chances for his teammates. His presence on the field has been crucial for the team’s success at the 2022 FIFA World Cup. The 29-year-old might not have had the best time at Chelsea but is certainly thriving at the grandest stage of them all with a goal and an assist in three games.

Rodri is an important player for the Spanish team at the 2022 FIFA World Cup. He is a versatile midfielder who can play in a variety of positions and has been contributing defensively with his tackling and interception abilities, as well as offensively with his passing and vision. His presence on the field has been crucial for the team’s defensive success at the tournament so far. He has been playing out of position as a central-back but has thrived in this new role.

What next for Arsenal without Gabriel Jesus?
Next Article