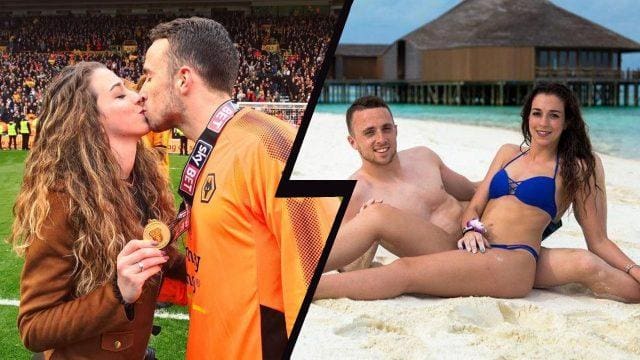 Diogo Jota is a Portugal international who plays as a striker for Premier League side Wolverhampton Wanderers.

The 23-year-old is currently in a relationship with Rute Cardoso. As they say, “behind every successful man, there is a woman”, Cardoso happens to be the woman behind the Wolves player.

Jota and Cardoso are childhood sweethearts and have been together for a long time quiet a long time now. They have no children yet but you suspect things may soon be moving fast considering the love both share.

Cardoso often posts pictures of herself and the Portuguese star on social media. She last posted a picture of just themselves on June 3 before posting more like a family photo the day after at the Molineux.

Also, Cardoso loves to regularly post photos of glamorous holidays on social media while also sharing images of herself and her darling while mostly on the beach side.

On her Instagram page which is made public for fans, Cardoso has over 6.5k followers which is a long way off of Jota’s statistics on Instagram.

Jota made a permanent move to Wolves in the summer 2018 for a fee around £11 million, having initially joined on loan from Atletico Madrid.

In the 2019/20 campaign, the former Pacos de Ferreira youngster has made 28 appearances for Nuno Espirito Santo’s team and has scored six goals while providing one assist in the Premier League.

Cardoso and Jota also share a home in the city of Wolverhampton, United Kingdom. They also have their dog Luna living with them and keeping their lives interesting.

Liverpool in a three horserace fight for Ismaila Sarr’s signature

Wilfried Zaha: A risk worth £60 million?

Granit Xhaka and what he actually brings to this Arsenal squad

Pedro Rodriguez: A Man Who Has Won It All