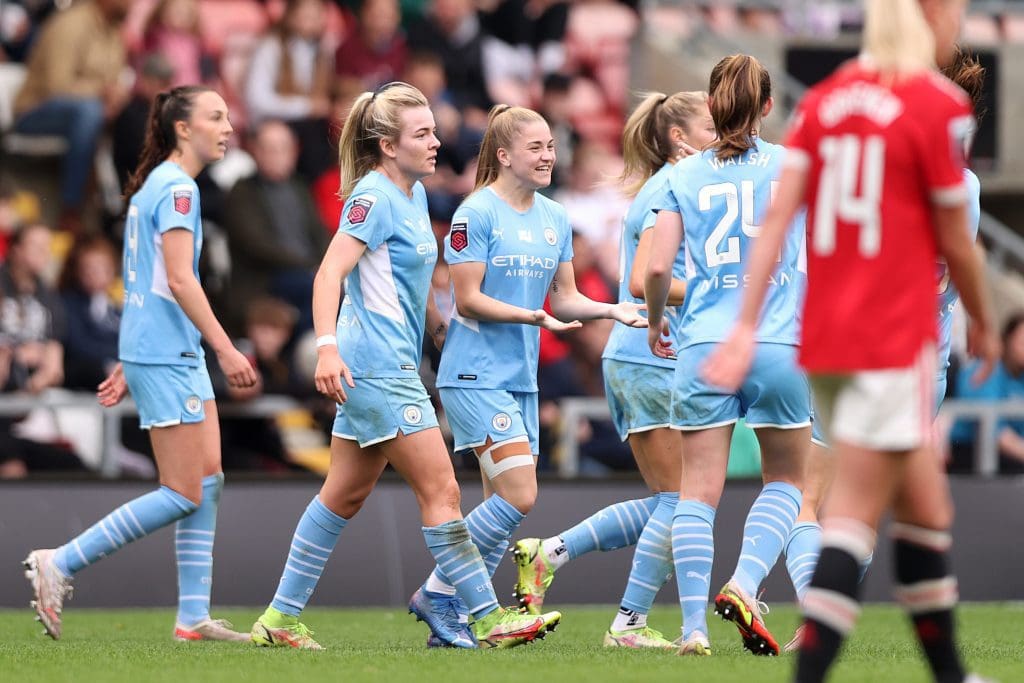 Manchester City Women traveled an hour across the city in order to face Manchester United Women, in a derby day matchup with Gareth Taylor needing a win. It was an entertaining match on the pitch as well as off it, with many anticipating a record-breaking day at the Leigh Sports Village.

The hosts were looking to bounce back with a derby win, as a win not occurring tonight may mean that they are out of the European race before it had even started. Gareth Taylor has made 2 changes to his side, with Ellen White and Jessica Park being dropped to the bench, in favour of Georgia Stanway and Khadija Shaw. Janine Beckie makes her return to the attack, with Stanway featuring as a right-back during the match, which allows Beckie to occupy a right-wing position.

The visitors were eyeing up 3 points which would seriously improve their chances of winning the top 3 race. Marc Skinner’s side were looking to take advantage of a Manchester City side who’d had a sloppy start to the season. Manchester United had only won a single derby day matchup, a 2-0 win in the Conti Cup almost 2 years ago. This was also Skinner’s first Manchester derby, and a positive result would only strengthen his connection with the United faithful. Only 1 change for Manchester United today, with Lucy Staniforth making way for Kirsty Hanson.

Manchester City took the lead just before halftime due to an excellent header from Khadija Shaw. She muscled away from the defenders, giving her space to open the scoring for the Citizens.

No team had really impressed throughout the entirety of the first half, but with Manchester United missing a few good chances early on, then it’s fair that Manchester City and Khadija Shaw capitalized. No changes from either team at the break, but it is important to cover that Man City are a player short, as Georgia Stanway was sent off due to a reckless challenge on Leah Galton. However, the Citizens looked better without her and scored a goal just 4 minutes later. However, 10 vs 11 is always a challenge, no matter who you are.

After being subbed on just 5 minutes prior, Lucy Staniforth gave United the equaliser they were looking for. A quickly taken short corner is whipped in by Ella Toone but Staniforth’s timing is off, which forces her to creatively spin around, with the heel of her boot guiding the ball in. 1-1.

3 minutes after a Lucy Staniforth goal that put them level, Alessia Russo put them in front. Blundell delivers a smart cross behind the defenders, which nutmegs a City player and is millimeters away from another. However, the pass finds Russo, who despite tripping over the ball takes a touch away from the surrounding City players and scuffs it into the bottom corner. 2-1 United.

Another substitution gone right, but this time for the Sky Blues. After a magnificent strike from Mary Earps to deny Janine Beckie, but it deflects off her, allowing Ellen White to track the ball into the box and tap it in. A true striker’s goal makes it level footing.

And that’s it! An end-to-end 2-2 match between 2 of the best clubs in the WSL. Gareth Taylor will be happier with the point, however, if you told him that before the match, he would’ve laughed at you. However in the light of Stanway’s early red card, which left City down a player for over an hour, and the fact that they came from behind. However the result means that City can only drop 8 points to reach the usual 2.1 points per game needed to reach the top 3, and they have to play Chelsea twice, Arsenal once, and United again. It’s a bleak time for the Citizens, and with their injury crisis, I think I can say with some confidence that their European challenge is over for this season.