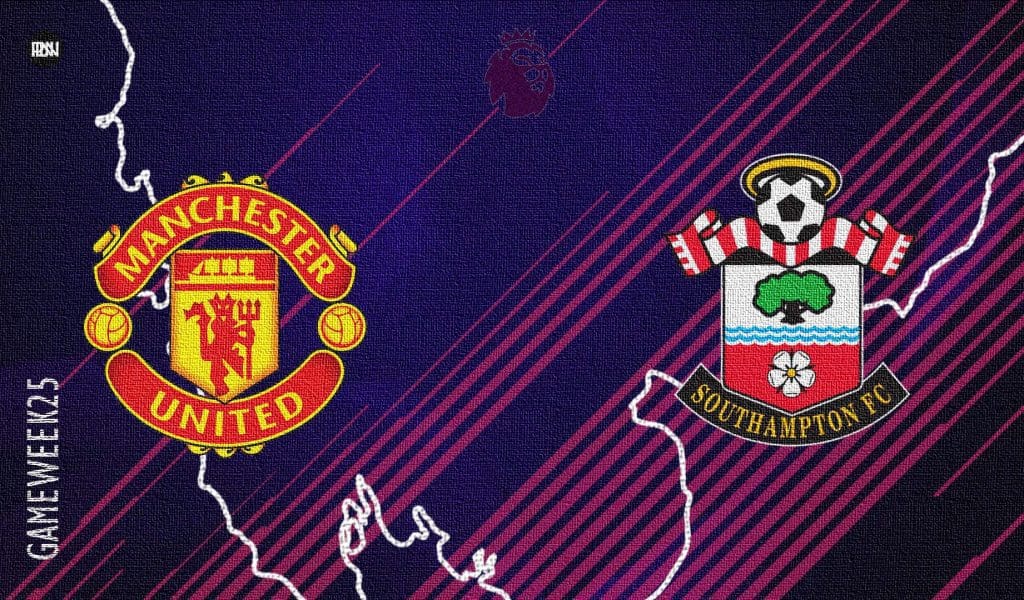 As the days tick down, the race for the top 4 spots and the relegation battle keeps heating up. It is matchday 25 of 38, and it brings us some blockbuster clashes over the weekend. One of the fixtures sees South Coast based outfit Southampton travel up north to take on 13-time Premier League winners Manchester United at Old Trafford.

Manchester United have been playing some really good football over the past few games, but the results have not backed them up. They were hard done by some controversial refereeing in the last couple of games, and have been let down by some poor finishing from their attackers. However, Man United fans will be pleased to see their side play some enterprising and inspiring football, and they will hope that the team can carry out playing such type of football consistently. The Red Devils last played in the league against Burnley at Turf Moor in midweek, sharing the spoils as the game ended 1-1. The visitors had a plethora of chances, and had the ball in the net twice before both goals were ruled out. They now go up against Southampton, who have had their confidence boosted by recent results, and will be up to make it very difficult for the Red Devils at home. Arsenal and West Ham’s wins in the midweek meant that United slipped down to 6th, and are in need of a win to get back into the 4th spot. They have Spurs hot on their heels and any slip-up now will be ill-afforded in the race for UCL qualification.

Southampton put up an excellent show in their 3-2 win against Tottenham Hotspur away from home. Manager Ralph Hasenhuttl tactically outwitted Antonio Conte, and the Italian coach had no answer. Saints were unlucky to not get more goals, thanks to some outstanding goalkeeping by Spurs goalkeeper Hugo Lloris. The win in London meant that the Saints now have four wins from their last six games, and boast a better form than their opponents on Saturday. Thursday’s win meant the Saints climbed into the 10th spot in the league table, as they look for their first finish in the top half of the table under Ralph Hasenhuttl and their first since the 2016/17 season. This week, Saints return to the ground where they were humiliated and destroyed by United last season, with the Red Devils putting 9 goals past a hapless Southampton team who were down to 9 men by the final whistle. Over a year after that fixture, Hasenhuttl and his boys will be baying for revenge against a United team that has been prone to a shock result this season. Southampton have a very poor record at Old Trafford, winning just two of 22 PL games there, and will be hoping to improve on it this time round.

Manchester United welcomed back midfielder Paul Pogba back into the squad last week, and he started the league game against Burnley in the midweek as well. It remains to see if he starts in a third consecutive game in the space of a week, or manager Ralf Rangnick gives him a rest in a bid to ease him back after his injury. The Red Devils will continue to be without central defender Eric Bailly as he recovers from an ankle injury sustained on international duty. Brazilian left-back Alex Telles was seen back in training after recovering from his COVID-19 positive test, however, his compatriot Fred was not seen and it seems he is still isolating and will be unavailable for the game on Saturday. After a poor performance from captain Harry Maguire in the midweek, the Englishman could make way for Swedish defender Victor Lindelof and it remains to see who Rangnick goes with.

Southampton will travel to Manchester without their defender Lyanco who faces up to 12 weeks on the sidelines as a result of a hamstring injury. Winger Nathan Redmond, goalkeeper Alex McCarthy and midfielder Nathan Tella are also set to miss out on the visit to Old Trafford. Striker Armando Broja suffered a head injury in the Saints’ midweek win over Spurs, but he was able to continue and will be expected to lineup in attack again on Saturday. Tino Livramento is a huge doubt for the game, having suffered a knee problem earlier, and faces a fitness test as he looks to return to the squad again.

BATTLE BETWEEN STUDENT AND TEACHER – WHO WILL COME OUT ON TOP?

Ralf Rangnick has been long considered one of the greatest coaches in German football, ushering in a new era with his philosophy. He revolutionized the landscape of German football, and subsequently football across Europe with his style of play and tactics. He is credited with inspiring a whole new generation of football coaches, some of whom are now among the most successful coaches. Thomas Tuchel, Jurgen Klopp, Julian Nagelsmann, Marco Rose – the list goes on. One name on the list is that of his next oppostion’s manager, Ralph Hasenhuttl.

The Southampton coach has long been one of the proponents of Rangnick’s philosophy of Gegenpressing or counter-pressing. When he first came to England with Southampton, he outlined his desires as a manager, and how his team should be playing. Not surprisingly, it was based on Rangnick’s style of play, wanting his team to play with high-intensity pressing and quick transition plays. Hasenhuttl’s belief in his philosophy has never wavered, even when faced with the lowest of lows with the Saints (two 9-0s in consecutive seasons).

Against Spurs in the midweek, it was this philosophy that helped the Saints in being dominant and imprinting their stamp on the game. The 3-2 win was largely down to the way the Austrian set his team up against Antonio Conte’s side and how his players carried out their instructions to a T. Hasenhuttl set his team up in the 4-2-2-2 formation (Rangnick’s preferred formation) against Conte’s 3-4-2-1, and played a high press which saw Spurs pinned down inside their own half and unable to get out for large periods of play. The Saints overloaded Spurs’ wing-backs with 2v1s in the wide-area with the 4-2-2-2.

Ralf Rangnick tried to impress the 4-2-2-2 on the Man United team in his first few weeks but found the 4-3-3 to suit his players better. Since then, the veteran German coach has slightly altered his playing style and with that, the football has flowed and United are seeming more fluid as the weeks go by. On Saturday, the two come face-to-face, with the teacher facing his student in what is a must-win game for the Red Devils. Southampton have had some good results in the past couple of weeks and their confidence must be sky-high following a huge win over Spurs. Hasenhuttl will hope to get one up over his old guru, and there is no doubt that it will be a battle of two very good tactical minds on Saturday. Man United vs Saints has provided some entertainment in recent times, and it seems set to be another terrific clash between the two.

The English winger took some time to get used to the rough and tough of Premier League, but now seems set and up to pace. He has been the standout performer in the United team and is undoubtedly their man in the form right now. The £73 million summer signing, has been instrumental in the attack since the January international break. Jadon Sancho was brilliant in the FA Cup defeat against Middlesbrough, scoring his first Old Trafford goal, and then followed it up with another accomplished display against Burnley. He seems to be effective from either wing and has linked up well with Bruno Fernandes in the midfield. He will be the one to watch out for again if he starts on Saturday, and the Southampton full-backs will be wary of letting him have too much time and space on the ball.

MUST READ: Jadon Sancho – Has he finally turned a corner at United?

The Southampton captain has been in fine form and has been one of the consistent performers in the Saints team over the past few seasons. He has especially hit form since the FA Cup third-round win over Swansea City. He has 4 assists and 1 goal in six games since that game, and has proven his threat from set-pieces time and again. Already an established free-kick taker, his deliveries from corners are also very dangerous and always find a man in a threatening position. He was brilliant in the win against Spurs in the midweek, providing two assists and putting in an amazing shift in the midfield. Spurs were cut through regularly with his passes, and he has the ability to hurt United as well on Saturday.

The Kepa Arrizabalaga resurgence: Forgotten Chelsea goalkeeper’s story of redemption
Why did Crysencio Summerville’s move to Hamburg collapse?
To Top