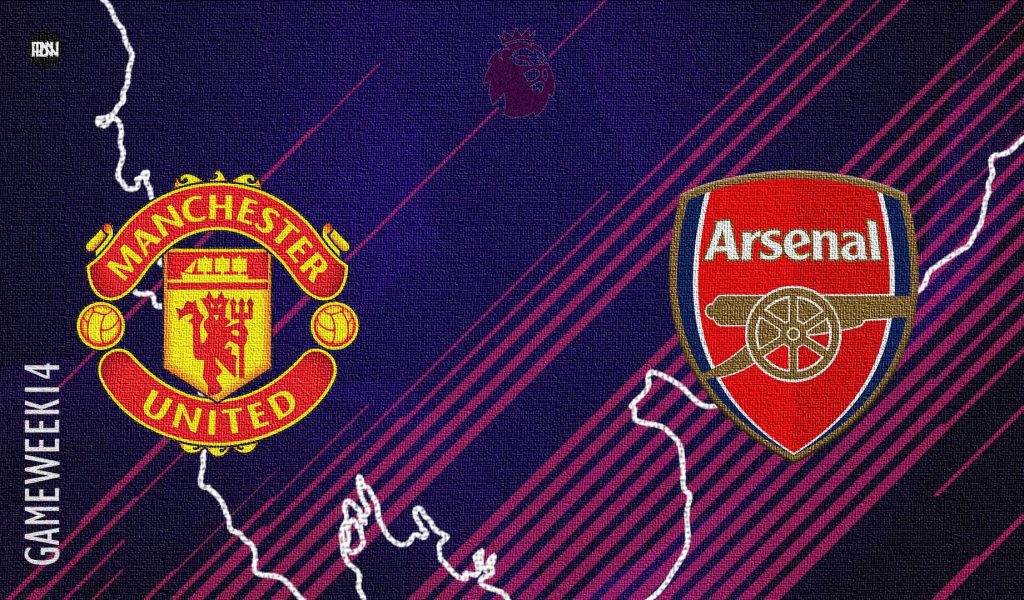 The Premier League is back in mid-week, and it is this kind of week-to-week action that all the fans missed during the sordid international break. Arguably the biggest game of Matchday 14 shall be when Arsenal visit Old Trafford to face Manchester United for a highly entertaining tie.

Man United finally appointed Ralf Rangnick on Monday afternoon. The club sent out a statement with the gaffer’s first words. It was bound to happen, and the club stuck to their word of hiring an interim manager rather than signing a permanent option mid-way through the season. However, ironically enough, the German is not somebody you would associate with a 6-month job. His ambitions of gaining the consultancy role might be the driving factor in this offer but the philosopher shall have very little time to stamp his footprint on this side bereft of identity. Michael Carrick made some bold choices against Chelsea and would have sealed a victory, had it not been for the outstretched leg of Aaron wan-Bissaka in the penalty box. But he remains in charge for the Arsenal game, although Rangnick is likely to be watching on from the stands. This could now get really awkward. The Englishman benched Ronaldo on the weekend, and a victory would have justified his selection. But his side drew after bending over backwards to save face from the 22 shots and 15 corners the league leaders took. Carrick shall now have to demand 100% from his centre-forward in mid-week and get a win against the Gunners. The Portuguese has been brilliant against teams outside the Top 4, evidenced by his performance against Tottenham at the end of October. But how do you tell the highest-paid player in the Premier League that he is only important against the mid-table sides? This is just part of the problem Carrick shall have to debunk for the game on Thursday. Luckily for him, Jadon Sancho is coming into his own, and his midfield worked really hard to earn a point on the weekend. Moreover, Harry Maguire is set to be back from suspension. Man United are a side that are hoping to avoid a rebuild and they shall be facing a team in mid-week that have been forced into one in the past couple of years, But the Gunners are on the rise and United have only won 1 league game out of the last 8. It is an uphill task, and a lacklustre performance will garner the boos at Old Trafford. Hence, Carrick shall have to ensure a victory and a great performance so that fans do not ask for his head when Rangnick comes through the door and looks to move out the dead weight. Alternatively, he is yet to lose a game in management, and a victory could really turn everybody’s opinion of him, after which he can proudly relinquish his duties to the German thinker whenever the time comes.

Arsenal are looking like they have finally found a style of play that suits them. They counter press the opposition well and take their chances when they have to. It is not the ideal way to approach the game, but it is highly effective. Their 4-0 loss to Liverpool was also encouraging as they always took the fight to them despite rolling over and accepting the defeat. Actions speak a lot louder than words, and Mikel Arteta produced a convincing performance against a tough Newcastle United side on the weekend. The Toon Army may not have won any games this season, but they have made it incredibly hard to penetrate them. Last season, the Gunners might not have come away with this result but they are turning the defeats and the draws into victories. This, in turn, has put them level on points with 4th placed West Ham and seven points within the top of the table. Competing for the league title is premature but finishing in the Top 4 is highly realistic. The team everybody thought would finish in the Champions League spots alongside Liverpool, Man City, and Chelsea is the side they shall be facing on Thursday night– Man United. However, Arteta must understand that while his side is on the rise, the Red Devils are far better pound for pound and certainly on paper. They are just not a cohesive side at the moment but can scare the blinkers of the best in Europe if they play to their potential. Thus, the Gunners must be as stringent at the back as they have normally been this season. Their record against the top sides is not pretty, conceding 11 goals without a reply to the title-chasing trio. But it can be forgiven because they are winning the games they ought to. The mid-week fixture is no different, and if they are systematic and structured, it is not too hard to defeat United, especially one that has not played for a victory in the two games Carrick has been in charge. It would have also been a good feeling for Arteta to see Gabriel Martinelli score a goal on the weekend. The Brazilian had gone goalless for far too long and is optimistically their long-shot of a future centre-forward. The Spanish manager shall also have to decide whether to continue with Nuno Tavares or bring in Kieran Tierney, given the stature of the opposition. That is the fix the young gaffer faces currently. He has several choices to make against a team that are completely unpredictable on any given day. Regardless, this is a good problem to have and should Brighton defeat the Hammers on Wednesday night, the Gunners shall be in pole position to scoop up the 4th spot– a place on the table they could only dream of after heavily losing their first three games of the season.

Michael Carrick has the same injury concerns he had against Chelsea on the weekend. Luke Shaw remains a doubt for the game, and Alex Telles is likely to start. Paul Pogba, Edinson Cavani, and Raphael Varane are still out with their respective injuries. However, the latter duo could return in the coming weeks. Harry Maguire was unavailable for the game at Stamford Bridge due to his suspension. But he shall be back to face the Gunners, with Eric Bailly likely to drop out of the squad, unless Carrick decides to employ a three-man backline.

Thus, there are barely any fresh updates, and perhaps the one big change that might happen is that Cristiano Ronaldo could start after being benched on Sunday.

For Mikel Arteta, the concerns are a little more complex. He confirmed that Sead Kolasinac and Granit Xhaka shall be out, but also revealed that Bukayo Saka might also be a huge doubt. The English starlet could face a late fitness test before the late kick-off on Thursday night. Apart from that, the Spanish manager also claimed that there are a few knocks to a couple of the players and they need to be assessed before the game.

Thus, nothing concrete but potentially crucial concerns lie ahead for the Gunners as they look to claim a spot in the Top 4.

Man United lethal on the counter?

Few teams have nailed the counterattacking system in the Premier League as effectively as the Red Devils. The one thing Solskjaer left-back was a team that could break efficiently and break open most teams in transition. Their signings in the summer were similar. Cristiano Ronaldo is perhaps the most well-rounded player to have in this system, as is Jadon Sancho. Amongst their existing lot, Marcus Rashford and Mason Greenwood suit very well in the system due to their pace and killer instinct in front of goal. Bruno Fernandes is the sewing machine that knits this entire piece together and finds runners with precision. The game against Arsenal shall be no different. The Gunners have great defenders and a good understanding amongst them but do not possess the best readers of a ball. If they do, it shall be put to the test on Thursday as Michael Carrick looks to keep his undefeated streak in his three games in charge as the caretaker.

Mikel Arteta to play Man Utd off the pitch?

The Spaniard is yet to lose a game in management to the Old Trafford outfit. In the three league games he has played against them, he has picked up 2 victories. Thus, he obviously understands the weakness of our opposition in mid-week and knows how to target it. His selection choices shall be vital here, especially since Bukayo Saka is a doubt. Starting Gabriel Martinelli could be a smart choice, while he will also have a decision to make between Nuno Tavares and Kieran Tierney. The Portuguese full-back may have been great against Newcastle but was awful against Liverpool. Thus, there are some tough decisions for him to make. It also depends on how he will counter press the opposition. Man United often try to win the ball high up the pitch or tempt the opposition defence into playing a high line and then make use of the spaces behind them to run into. Arteta needs to be aware of these tactics and counter them effectively. For two relatively inexperienced managers, it could be a game of chess on Thursday.

The Englishman had a slow start to his Man United career. He had not contributed to a single goal in 14 games before scoring in consecutive games against Villarreal and Chelsea. It looks like he is finding his confidence back and is the primary star under Michael Carrick. The English manager perhaps likes the work his fellow countryman puts in defensively and his pace going forward. The winger is also one of the more decisive players in the final third and can score and create with great efficiency. Tierney has just returned from an injury, and Tavares had a horrid time against Mo Salah. Thus, regardless of the selection, Sancho can wreak havoc on the right-wing. He is set out to justify the £73million bucks the Red Devils shelled out on him in the summer, and scoring against another big team will be a positive step in that direction.

As the games go by, it becomes clearer that Thomas Partey is an indispensable member of the Arsenal set-up. He is just as good as anybody in their specific roles, but the Gunners rarely function cohesively without him in the team. Mikel Arteta has several attacking options and a fair few in the defence too. But the selection choices are thin in the midfield department, thereby increasing the value of the Ghanaian. But it goes without saying that his quality justifies that as well. He screens the opponents well and is strong in possession. He may not be the most technical player on the pitch but possess an excellent passing range and the drive to get past opponents in short spaces. Man United are bound to counterattack and penetrate the Arsenal defence repeatedly on Thursday. Ben White and Gabriel Magalhaes shall be alert, but given the attacking might of the opposition, Partey will need to put in the hard yards and help his defence out before turning into an able contributor to the attack. It could be a rough night for him, but a victory will taste sweet at the end of it.