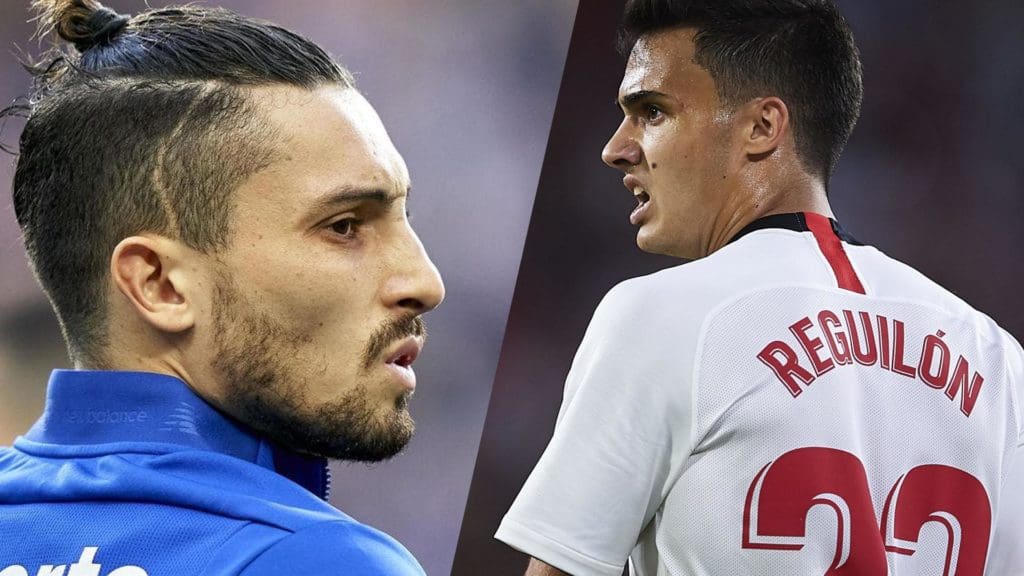 There has been a lot of speculation going around about the left back position at Manchester United. The club has been linked with a whole host of potential left-backs. But the two names that were heavily linked with the club were Sergio Reguilon and Alex Telles. United have missed on acquiring Reguilon signature after he joined Jose Moriniho’s Tottenham a few days back. Have Manchester United missed out on a top Full-back, and will Alex Telles be the right player to sign?

There are a lot of similarities in the two full-backs, both are great on the ball and create a lot of chances for their respective teams. But what attributes have United missed out on and what will their new potential Target bring to their team.

While Reguilon is still a young player at 23 he has played a lot of crucial games for Sevilla including in Key matches against United in the Europa League. Reguilon who came through the youth ranks at Real Madrid was sent out on Loan to Sevilla where he made the left-back position his own, he started 31 games for the Spanish side in La Liga and made 5 appearances in their Europa League campaign. With Reguilon there is potential for more growth as he is only just 23 years old.

Alex Telle who is currently playing for Porto on the other hand is 27 years old now, he isn’t an old player by any stretch of the word but in comparison he is 4 years older than Reguilon.

The Modern full-back position has changed significantly and while previously full-backs were assumed to be defending and hold the line with the center-backs, now the position is completely changed with full backs being much more involved in playmaking.

And Alex Telles is an example of that, he has been involved in more goals for Porto in the last season than Luke shaw has in his entire United career. Reguilon also falls behind Alex telles in this category having registered 3 goals and 4 assists last season.

Telles is more of an attacking threat than Reguilon, which was backed by his opening day performance of the 20/21 season where Porto ran out 3-1 winners. Telles scored two goals through Penalties and assisted the third in this win showing just how much he loves getting forward. He has a lot to offer offensively and can link up play well on the flanks.

Telles is much more of an attacking threat than Reguilon, but on the defensive side of things Reguilon provides more stability than the Brazilian. The Tottenham man made 85 tackles in the league last season and won 61 aerial duels. He also made more blocks and made more clearances on average than Telles.
Telles isn’t all attack however his ability to read the game saw him make more interceptions last season than Reguilon. Telles is better with the ball at his feet completing more dribbles and he is also very sensible when tackling committing less fouls than his younger counterpart.

Two exciting Full-backs with great ability on the ball and are technically great. Both are great to watch and contribute to the team in their own way. Telles is Technically brilliant and has amazing control on the ball.

But It does look like United have missed out on a defensively solid full-back who also has the potential to grow. Reguilon would’ve been a great investment for the Red Devils but now Tottenham will be the benefactors of his services.

Telles has one thing going for him, he is currently in his prime at 27 and it would be the right moment for any club that is in need of an immediate recruitment to snap him up. He would settle into the team quite well and would certainly be a favorite to start in that position. Telles will be an excellent signing for United and there is no doubt he would start over Luke Shaw and Brendon Williams provided a fee is agreed between FC Porto and Manchester United.

No Jota? – Time for Daniel Podence to step-up
Wilfried Zaha – Time to start stepping up again
To Top